What Would Kemp Do? 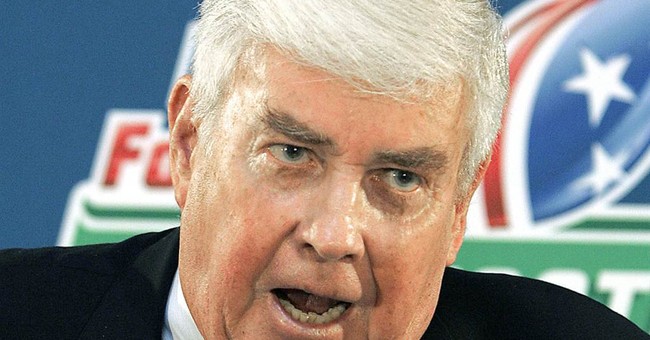 Kemp was an American legend. A quarterback of the pre-Super Bowl era who led the Buffalo Bills to consecutive championships in the American Football League, Kemp went on as a Member of Congress to lead the Republican Party to historic legislative victories. Known as a champion of supply-side economics, Kemp was one of the earliest promoters in the Republican Party of pro-growth tax rate cuts, arguing in his book An American Renaissance that “a rising tide lifts all boats.”

Given his success as a leader of the conservative movement in the 1970s and 1980s, an interesting question is: what would Jack Kemp be doing if he were alive today?

We believe it’s very clear what issue Congressman Kemp would be addressing. The dynamic Jack Kemp — the man who helped Ronald Reagan transform tax policy in the United States and, by example, around the world — would be focused on fixing monetary policy by promoting the gold standard.

Kemp made his greatest impact on tax policy, but it is a misunderstanding to think of him as focused solely on that issue. He concentrated on growth, not as an aggregate number, but as a reflection of the individual successes of Americans throughout our vast economy.

There were always two elements of this that were central for Jack: 1.) Lowering marginal tax rates for all Americans so they had the ability to keep a larger portion of each additional dollar they earned, and 2.) Defending the value of that dollar against depreciation and currency manipulation by tying its value to gold.

Jack believed that growth — true growth — is founded on a stable dollar and predictable monetary policy. He would be appalled by the Federal Reserve’s 7-year-old zero interest rate policy (ZIRP) that has benefited big banks, big business, and big government at the expense of small businesses and wage earners. Under zero rates, wages have remained stagnant, prices have risen across the board, and the middle class has fallen further and further behind. The simple truth is that individuals and families cannot succeed without stable money. Jack understood this and championed it.

Jack wouldn’t rest until sound monetary policy was restored. This would be just as important to him as taxes were in his congressional years. He would point out that workers have been on a treadmill dating back to the early 1970s, when President Nixon broke the last connection of the dollar to gold, and he would be connecting this issue of stagnant wages to every single issue — how people get and keep jobs, how their wages can increase with time, and how their entrepreneurial abilities can best be unleashed.

Unfortunately, no one has yet appeared on the political scene who reproduces the fire, tenacity, and directness that marked the politics of Jack Kemp. Today’s Republican leaders are united behind corporate tax reform, which (assuming Democrats ever let it happen) would have minor economic impact and is a devastating reinforcement of the stereotype that Republicans have zero interest in “people like you and me.” Though its advocates sometimes invoke the supply side, Kemp’s message was about protecting the value and dignity of work and promoting the well-being of each and every person.

Many might question whether Kemp would really put himself out there advocating the gold standard. We believe that in today’s circumstances he would be focused on little else. In the 1980s, the stubborn leadership of President Reagan and Fed chairman Paul Volcker ended double-digit inflation and soaring interest rates by (in some ways but not all) simulating the strength of a gold-backed dollar, which allowed the 1981-88 tax rate cuts to work their magic. Today we have a president and Fed chair who refuse to end seven years of dysfunctional monetary policy because they are petrified of what would happen if they did. In 2015, the wheels have completely fallen off the paper money system that Reagan and Volcker managed to work around and overcome.

Kemp and his allies were vilified in the 1970s and early 1980s in and out of the Republican Party. Few remember how lonely the initial group of Kemp acolytes were and how academic, media, and political elites mocked them for advocating deep tax rate cuts as well as a return to gold. When he did tax policy, Kemp was the visionary and (with Jack’s encouragement) Reagan became the national leader capable of transforming the dream into reality.

We can’t bring Jack Kemp back from the dead. So who will be the next great political quarterback?

We need a leader who is willing to ignore a fatalistic, eye-rolling political elite. As with tax policy, there is a willing audience among American voters who sense there is something deeply wrong when the rich are succeeding while the rest of us are losing ground or at best treading water. There is a wealth of grassroots power waiting to be unleashed with a believable message backed up by correct policy, but it needs a high-profile advocate willing to take on that responsibility and wear the ridicule of American elites as a badge of honor.

We know what Jack Kemp would do. Now we need to know who will be the next Jack Kemp. Will it be one of the several GOP candidates who are now speaking openly and substantive about monetary policy? Who will be America’s quarterback? Finding the answer could determine the future of economics as well as the political destiny of 21st-century America.