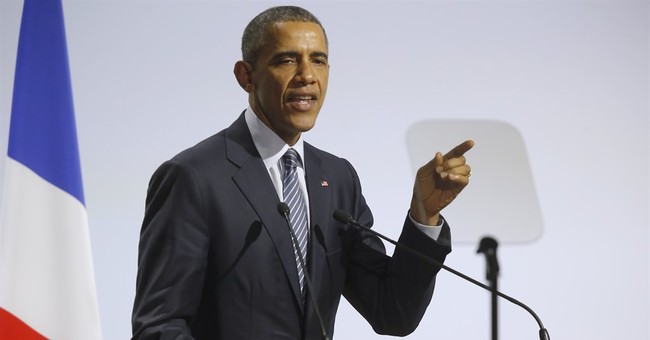 “I’m just saying, people. You don’t want to get to stage four,” he said. “We all have a huge investment in making sure our children, our grandchildren are able to enjoy prosperity, and that’s dependent on a planet that accommodates us.”

President Obama was speaking in anticipation of COP21—the next big global climate change conference, starting November 30 in Paris, where world leaders will soon attempt to set global carbon dioxide emissions reduction targets. If the planet warms just 2 ° C, delegates warn, the globe will be doomed to burn—and this conference could very well be the government’s “last chance” to save humanity.

The whole 2 ° C thing came from a study by a “team of 17 leading international climate scientists.” That team just so happens to have been led by none other than prominent catastrophic climate change modeler, James Hansen.

Two degrees. That’s it. Then we’re all toast. That’s exactly what the United Nations claims. They make it sound as if every fraction of every degree of Earth’s temperature is entirely determined by humanity’s greenhouse gas emissions. Forget the sun. Forget the oceans. Forget the clouds. Forget any other natural variable that has ever influenced weather in the past—when temperature has risen and fallen a great deal more than 2° C, and variations in carbon dioxide concentration have followed, not led, indicating it’s not the driver. None of those count anymore.

It’s been said that good questions are better than easy answers. So here’s just a few things to consider that may help to distinguish between truth and absurdity in the climate debate:

And please don’t forget to mention that Atlantic hurricanes are down 80% from 10 years ago. Tornadoes aren’t showing up more often, either.

Finally, will somebody please talk about how Earth is strong and resilient!

To think that the planet is freakishly fragile and can’t handle a change of a few degrees in temperature is indeed absurd. (In specific locales—like the city you live in—temperature routinely varies by 10, 15, 20 degrees or more every day.) The entire ecological history of our planet shows nothing but rapid and wild change and adaptation. How many ice ages have we been through? It is widely accepted that Earth has been through at least one. The great Ice Age was an ice sheet thousands of feet thick that began at the top of the globe and came all the way down as far as St. Louis.

Talk about damage to the planet! There was no life under that ice. Mountains were moved. Valleys were carved. But guess what? The Earth has recovered! So why should we expect Arctic sea ice to remain the same? It doesn’t! By nature, itfluctuates. So why should we expect temperatures to be stable? They never have been! They have always gone up and down.

Why then should we think 2 degrees warmer will ruin the planet? It simply won’t!

But getting back to Paris and comparisons, you may recall the many times the Obama Administration has proclaimed climate change as a threat equal to or a greater than terrorism. I sadly wonder how many in France would hasten to nod in agreement given the recent terrorist tragedy in Paris. Maybe instead they’d want to shout out, “Forget ‘climate change,’ energy empowers the poor!”