Time to Give the CO2 Endangerment Finding a ‘Tremendous Whack’

Jay Lehr
|
Posted: Jul 20, 2019 12:01 AM
Share   Tweet
The opinions expressed by columnists are their own and do not necessarily represent the views of Townhall.com. 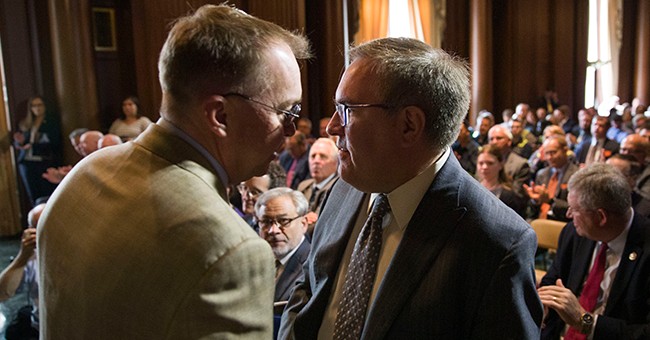 There has been a barrage of attacks against the Trump administration for replacing the previous administration’s Clean Power Plan (CPP) with the Affordable Clean Energy (ACE) rule. Last week, for example, the American Public Health Association and the American Lung Association announced that attorneys representing them from the Clean Air Task Force are filing a lawsuit challenging the Environmental Protection Agency (EPA) for repealing the CPP and bringing in ACE in its place. The three organizations issued a press release in which they asserted, “EPA’s decision to repeal the Clean Power Plan and replace it with the ACE rule continues to disregard the vast health consequences of climate change and puts more lives at risk.”

That is nonsense, of course. But that didn’t stop other groups from taking a similar stance. Carter Roberts, President & CEO of the World Wildlife Fund, said, “This rule [ACE] enables dirty power plants to keep polluting – grounding federal energy policy firmly in past and saddling future generations with the costs of unchecked climate change.” Michael Brune, head of the Sierra Club said, “This is an immoral and an illegal attack on clean air, clean energy, and the health of the public, and it shows just how heartless the Trump administration is when it comes to appeasing its polluter allies.”

Environmentalists, Democrats and some state attorneys general dubbed the regulation the “Dirty Power Plan.” U.S. Democratic Senator Tom Carper complained that the “Dirty Power Plan is a failure of vision and leadership.” They are losing the war on coal begun by Obama and cannot tolerate what now appears to be a defeat.

If Trump administration advisors thought they could appease their opponents by bringing in a rule focused on the useless, and ultimately dangerous goal of limiting carbon dioxide (CO2) emissions, they were sorely mistaken. But, as long as they did not contest the scientifically flawed idea that CO2 is a dangerous pollutant that must be controlled, they really had no choice but to bring in some form of CO2 reduction regulation.

Dr. Sterling Burnett explained on the internet “Think Radio” program, “Exploratory Journeys, “It [ACE] was forced on the Trump administration because they didn’t, at the same time, say we are going to re-examine the Endangerment Finding [the EPA’s 2009 finding that CO2and other ‘greenhouse gases’ (GHG) endanger the health and welfare of Americans].”

“As long as the Endangerment Finding [EF] exists,” said Burnett, “any administration, no matter how skeptical of the claims that humans are causing catastrophic climate change,…the courts will order them to come up with plans to reduce carbon dioxide emissions. So, to some extent, the administration’s hands were tied because the Endangerment Finding existed and they decided not to question that.”

“So, it's time to go back and examine that [the EF],” concluded Burnett. “And they [would] find there is copious evidence … hundreds of studies out there every year that question one aspect or another of the claim that humans are causing catastrophic climate change. All they have to do is cite that data and say, ‘higher carbon dioxide levels are not going to poison you.’ And, to the degree they are driving a modest temperature rise, [it] is not catastrophic. Human societies have thrived during warmer periods in the past and they have done less well during colder periods.”

It is hard to believe that the attacks that would ensue against the Trump administration for opening the GHG EF to re-examination would be any more severe than what they are already being subjected to for enabling the ACE rule. So, what was the advantage of bringing in a weaker version of Obama’s misguided CPP? If you are going to infuriate your opponents to the extent that they will take out lawsuits against you and publicly label you “the worst president in U.S. history for protecting the air and our climate,"as Brune did after Trump’s environment speech on July 8, you might as well do what you really wanted to instead of taking half measures.

Burnett explained that ACE has another serious downside that will limit the Trump EPA going forward.

“ACE is dangerous because it cements for a second time, this time by a Republican, supposedly skeptical administration, the idea carbon dioxide is a pollutant that needs to be regulated,” said Burnet in a Heartland Press release. “This gives the Endangerment Finding the Trump administration’s stamp of public approval, which environmentalists will cite when they fight this in court saying, ‘even the Trump administration acknowledges carbon dioxide is damaging the U.S. but they are unwilling to take the steps necessary to truly fight carbon pollution.’” The ACE rule is unfortunate but faced with the amazing lies from the opposition, for better or worse, the administration decided on it.

ACE is also problematic because it sets the stage for yet more CO2 controls to come from the EPA that will apply to new power stations, standards that fall under ‘New Source Review’ (NSR) standards. Indeed, Reuters reported on June 19 that, “Wheeler told reporters after signing the ACE rule that EPA will address NSR reform in a separate rulemaking that will be finalized separate in the coming months.”

It’s time for the Trump administration to call a spade a spade. They should clearly explain that CO2 endangers no one and order that the EF be reopened. And, when the re-examination inevitably reveals that effectively classifying CO2 as a pollutant was a mistake, they should not be quiet about it. Instead they must follow Winston Churchill’s advice. “If you have an important point to make, don’t try to be subtle or clever. Use a pile driver. Hit the point once. Then come back and hit it again. Then hit it a third time—a tremendous whack.”