Now Everybody Works For the Government 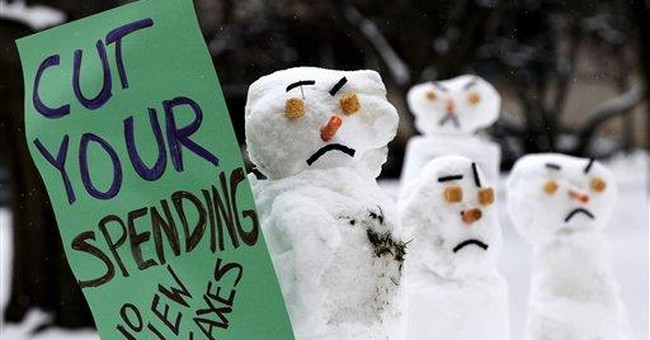 According to Ronald Reagan, the American taxpayer is someone who works for the federal government without having to pass the civil service examination.  That is truer today than in Reagan’s day.  While the number of Americans on the federal payroll has dramatically increased, so has the number of us who work for the federal government without being on a federal agency payroll.  Back in 1910, when Tax Freedom Day was first observed, taxes were just five percent of a person’s income, and Tax Freedom Day came on January 19.  Now we pay more than 26 percent of our income to the government, and we work until April 9 (three months later) just to pay our taxes every year.  Those who call this “progress” need to pay attention to H.L. Mencken, who once noted, we now pay out twice as much in taxes as we used to get in wages.  I don’t think anybody since Mencken has had the nerve to calculate that ratio.

Sadly, the news gets worse.  When deficit interest rate payments are added to the tax bill, the Tax Freedom Day extends to May 17.  Plus, some economists are saying that the nation’s economy has undergone a “structural” change, rather than a temporary collapse that can be readily reversed.  Instead of a positive forecast, those economists are arguing that a rebound will take years and, in the meantime, people’s assets are worth less than before.  More housing foreclosures will push the housing market into further decline; at the same time budget deficits, oil prices and health care costs will continue to go up.  Amazingly, some on Capitol Hill believe that the way to reverse the so-called “structural change” is to pass another taxpayer-funded bailout for Wall Street banks.  Again, the public would be propping up failing or failed banks, complete with billions of taxpayer dollars and federal oversight of even more institutions.

We learned recently of an Internal Revenue Service (IRS) proposal where “high wealth” individuals would be targeted for special tax enforcement programs to ensure that “everyone pays what they owe.”  This shift of emphasis would aim at unmasking “aggressive tax strategies” of overseas enterprises so that they are “appropriately taxed.”  This means that sophisticated business investments with complicated legal structures and tax consequences would be investigated at public expense in order to “assess” whether such arrangements “risk” tax compliance and the integrity of our tax system.  In other words, big brother and the tax collector are joining forces to check out everybody who makes money to make sure they are paying enough taxes.  Ironically, the rich are already paying more than half of all individual taxes, and the new laws are designed to “squeeze” from them “an extra $1.2 trillion over 10 years.”

For the rest of us, numerous exemptions will decrease immediately: we won’t be able to deduct our state and local taxes from our federal income tax; tuition expenses won’t be deductible; depreciation on farm machinery will be a thing of the past; and no charitable deduction for book donations or computer equipment.  Over the next several years, further deduction-and-exemption decreases will take place along with tax rate increases.  And, we’ll be paying an additional $5 billion for over-the-counter medications.  Further, the new Health Care Reform legislation fines those employers who do not offer what the feds consider “adequate” insurance — $2,000 for every employee after the first 30.  That tax rule alone could force employers to reduce their number of workers and/or to increase the number of part-time employees. Sadly, low-income parents are the ones more likely to use government subsidies for purchasing health care insurance, which means employers will be less likely to hire them and put their firms in jeopardy for tax penalties.

At a more important level, new tax laws with their “marriage penalty” could weaken marriage in much the same way that the “Great Society” welfare legislation — with its financial incentives for single women — undermined the black family.  If federal support and encouragement for marriage is removed, an essential building block of the community and nation is destroyed.  Married couples — who are establishing families that will strengthen their local community and provide the very best possible environment for raising future citizens — should not be required to pay more taxes (estimated at an additional over $10,000 per couple, per year for many) and be penalized for their commitment to the well-being of the nation’s future citizens and leaders.  Joe E. Lewis’s words have never been more apropos than today, “With the way tax laws are, you might as well marry for love.”