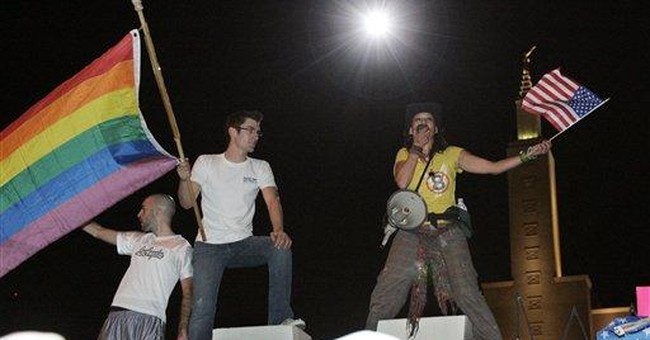 In the midst of a far-left Senator's sweeping victory to become the first black president of the United States, voters in three states stood on moral principle to solidly support the institution of marriage as an exclusive union between a man and a woman. Ironically, many of those who voted for liberal president-elect Obama also voted to support traditional marriage. In fact, analysts report that the marriage measures would not have passed without black voter support - seven in 10 black voters supported the ballot initiative. To me, that fact indicates that many citizens voted to support a black candidate in this historic election rather than to support Obama's liberal policy positions. Further, it indicates Obama's success in keeping his policy positions in the background and his statements about his personal faith and commitment to bipartisanship in the foreground.

These victories for traditional marriage resulted from heroic efforts by pro-marriage leaders across the nation. Their efforts were, in many respects, similar to David going up against Goliath. The homosexual activists launched unprecedented public relations efforts, and they were supported by the media who gave them positive coverage. In California, voters reversed the decision of their State Supreme Court decision last May to make same-sex "marriage" legal in California. Arizona came back to support marriage after falling short in a previous effort two years ago. All of those efforts in support of same-sex "marriage" were nothing, though, when they were up against the prayers of thousands of Christians across America who fasted and prayed that our nation would protect marriage as the foundation for the family. These believers recognize that married couples who form strong families and nurture children in solid values are a bulwark against those forces that undermine American culture.

The decisions in Florida, Arizona and California are affirmations of the sacred nature of marriage and indicate wide public support for conservative values across the board. These decisions also reflect the continued influence of the "values voters." Religious voters dominated the vote on California's Proposition 8. According to the San Francisco Chronicle, "Of the seven in 10 voters who described themselves as Christian, two-thirds backed the initiative. Ninety percent of voters who said they had no religious affiliation opposed the measure, but they were a much smaller portion of the electorate."

Kellyanne Conway, a conservative pollster and analyst, declared the victory for Obama was also a "decisive" victory for conservatism. She wrote, "Our post-election polling reveals no embrace of liberalism in this country. Further, she said:

Fundamentally, Americans continue to prefer a limited government, a restrained judiciary, fiscal discipline, and traditional values. Actual voters are indicating that they prefer judges who apply the law equally over those who take into account the personal circumstances and life experiences of individuals who find themselves in a courtroom. They are as pro-life as they were in 2004 and believe that the Second Amendment is a crucial part of the Constitution. In California and Florida, they voted decisively to preserve traditional marriage.

The message to politicians seems quite clear. Voters remain conservative on social issues and strongly support protecting marriage and the traditional family. They liked Barack Obama and believed in his promised "change" and "hope" for a bright future, but they did not buy into a liberal agenda that would fundamentally change the structure of the family, nor did they vote for a liberal domestic agenda. In Conway's poll, more voters identified themselves as conservatives than self-identified as liberal both among those who identified themselves as Republican and those who self-identified as Democrat. In other words, regardless of their party affiliation, more voters are conservative than liberal.

Voters also voted conservative in far left San Francisco. In that notably leftist city, voters defeated a measure called Proposition K that would have essentially decriminalized prostitution. Supporters of the measure talked about "victimless crime" and painted a utopian picture of "sex work" that contradicted the fact that many of the city's prostitutes were brought into the United States from third world nations where ruthless criminals preyed on their vulnerability to lure, trick or entice them into sex slavery. If the measure had passed, San Francisco would have drawn some of the worst elements of the criminal world into its midst. The voters knew better and rejected Prop K.

All those who claim that the election of Barack Obama signals the end of conservatism in America and sidelines the values voters need to look at the facts. The success of the marriage initiatives in California, Florida and Arizona, and the rejection of Proposition K in San Francisco, indicates that conservative Christians are still a powerful force for good in America and still exert strong influence in the political arena. Conservatives can echo Mark Twain's words and declare, "Rumors of our demise are greatly exaggerated."