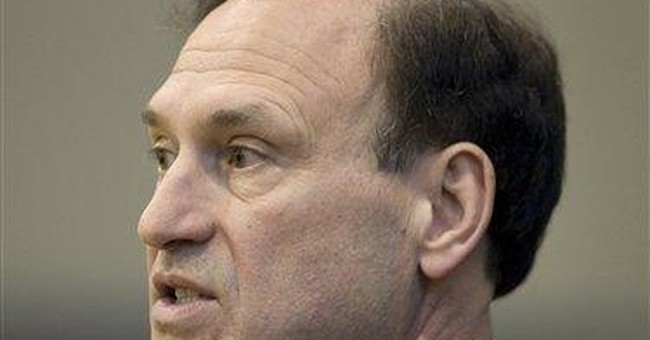 It's a good bet that the conversation in the Supreme Court break room the morning after the president's State of the Union speech was about Obama's drive-by distortion of its ruling in Citizens United v. FEC. Predictably, the spin at The Washington Post and Chicago Tribune was "Alito Disparages Obama's Supreme Court Criticism."

Where else but in the Bizarro World of Obama's branch offices at the Post, Trib, and MS-NBC could we find such a polar opposite version of "reality"? Like their champion, these media corporations are extremely vexed that the Court leveled the playing field for all corporations and nonprofits to speak in political campaigns.

With six of the nine Court members seated front and center as invited guests, Obama directed his "sharp attack," as Adam Liptak at The New York Times called it, at those present -- Chief Justice John Roberts, Justice Anthony Kennedy, and Justice Samuel Alito, who joined with Justices Antonin Scalia and Clarence Thomas in the majority opinion.

Employing the same "scare tactics" and distortions he condemns his critics for allegedly using, Obama wrongly accused the majority of reversing "a century of law" that could allow our elections to be "bankrolled by America's most powerful interests, or worse, by foreign entities."

Not even close. The law banning spending by foreign corporations in our elections wasn't even at issue. The Court reversed a ten-year-old ruling that had allowed political speech to be banned based on the speaker's corporate identity.

The "Free Speech Five" endured Obama's displeasure for actually taking the First Amendment at its word: "Congress shall make no law abridging the freedom of speech." They upheld freedom of speech, the kind of speech the Framers of the Constitution intended to protect -- political speech, and not pornography.

The justices, including three dissenters to the ruling, sat silently, seemingly stunned. Sam Alito shook his head slightly and appeared to silently mouth "not true" as he looked Obama's way. Anyone outside the House Chamber and remotely familiar with the Court's ruling was yelling it aloud as they shared the understandable reflex by a man whose internal lie detector went off the graph.

Recall that Alito endured with grace and dignity all of the personal insults, including "racism," that the left hurled at him during his Senate confirmation hearings. What he reacted to during the speech wasn't a personal affront. It was the distortion of the Court's ruling by someone who should know better.

Obama's remarks were written for him, approved by him, posted on the White House website, and read by him from his omnipresent teleprompters.

Alito spontaneously and silently disagreed, and he's criticized for disparaging "criticism." It's the same stilted view of the First Amendment the Court struck down. Everybody gets to be a critic but Alito.

Obama professes to be a "student" of the Constitution, one who has "taught it as a teacher." Either he's incapable of understanding the ruling, he is misinformed by his lawyers, or he willfully distorted the truth in front of a national audience simply because the Court majority rejected his discriminatory view of the First Amendment. He feigned "due deference" to the Court as he misled the American people:

With all due deference to separation of powers, last week the Supreme Court reversed a century of law that I believe will open the floodgates for special interests -- including foreign corporations -- to spend without limit in our elections. [Applause.] I don't think American elections should be bankrolled by America's most powerful interests, or worse, by foreign entities. [Applause.] They should be decided by the American people. And I'd urge Democrats and Republicans to pass a bill that helps to correct some of these problems.

Notice that Obama expressed it as his belief. In his weekly address on January 23, the former "law professor," a title the University of Chicago School of Law School disputed, expressed this belief as a matter of fact. He said, "This ruling opens the floodgates for an unlimited amount of special interest money into our democracy."

Prof. Bradley Smith of Capital University Law School called Obama's comments "either blithering ignorance of the law or demagoguery of the worst kind".

The Court held that 2 U.S.C. Section 441a, which prohibits all corporate political spending, is unconstitutional. Foreign nationals, specifically defined to include foreign corporations, are [prohibited] from making "a contribution or donation of money or [other] thing of value, or to make an express or implied promise to make a contribution or donation, in connection with a Federal, State or local election" under 2 U.S.C. Section 441e, which was not at issue in the case. Foreign corporations are also prohibited, under 2 U.S.C. 441e, from making any contribution or donation to any committee of any political party, and they ARE prohibited from making any "expenditure, independent expenditure, or disbursement for an electioneering communication."

Obama also announced in his January 23 speech, that his staff had begun "work" with Congress to "repair the damage" of the Court's ruling:

When this ruling came down, I instructed my administration to get to work immediately with Members of Congress willing to fight for the American people to develop a forceful, bipartisan response to this decision. We have begun that work, and it will be a priority for us until we repair the damage that has been done.

Obama had already publicly expressed his disagreement with the Court, which is his right. His goal during the State of the Union speech wasn't to get a congressional hand in crafting legislation. He wanted their hands in embarrassing the Court majority, and hands he got. U.S. Senators, House Members, and presidential cabinet members (including the Attorney General of the United States), behaved like partisan political hacks as they stood to applaud Obama's unprecedented potshot.

America needs a Supreme Court packed with the likes of Samuel Alito. What we witnessed during the State of the Union confirms that Obama will try to pack it with polar opposites from the legal wing of Bizarro World.