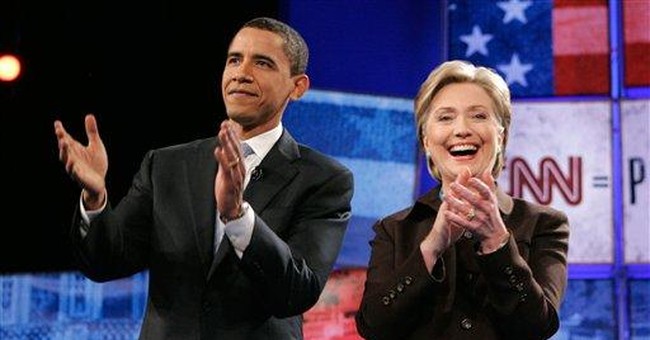 If Ben Stein watched CNN’s “Democratic Candidates Compassion Forum” Sunday night, he may be considering a sequel to his forthcoming movie: Expelled: No Intelligence Allowed. The sequel will be Expelled II: The Search for Potential Life. There’s no intelligence here either.

The co-hosts of the forum at Messiah College, CNN’s Campbell Brown and Newsweek editor Jon Meacham, questioned Hillary Clinton and Barack Obama on “issues of faith and compassion and how a president’s faith can affect us all,” including some “deeply personal” questions.

Meacham asked both presidential candidates about their faith and abortion: The transcript is available here.

MEACHAM: Senator, do you believe personally that life begins at conception?

CLINTON: I believe that the potential for life begins at conception. I am a Methodist, as you know. My church has struggled with this issue. In fact, you can look at the Methodist Book of Discipline and see the contradiction and the challenge of trying to sort that very profound question out.

MEACHAM: Senator, do you personally believe that life begins at conception? And if not, when does it begin?

OBAMA: This is something that I have not, I think, come to a firm resolution on. I think it’s very hard to know what that means, when life begins. Is it when a cell separates? Is it when the soul stirs? So I don't presume to know the answer to that question. What I know, as I've said before, is that there is something extraordinarily powerful about potential life and that that has a moral weight to it that we take into consideration when we’re having these debates.

One can only imagine Ben Stein following up when Brown and Meacham dropped the ball:

Obama: I think I haven’t come to a firm resolution on that either.

Stein: How does “potential life” begin in the first place?

Obama: I think I don’t presume to know the answer.

Stein: I guess you weren’t personally in the pew the day they taught biology.

Clinton: It’s a difficult question that my church has struggled with.

Stein: But how does a cell divide if it isn’t alive?

Obama: There is something extraordinarily powerful about potential life.

Clinton: The Methodist Book of Discipline has a contradiction about it.

Stein: And so do you. But you haven’t answered the question. How does life come from nonlife?

Better yet, why didn’t Brown and Meacham ask? And why didn’t any of the “distinguished, bipartisan audience of faith leaders from around the country” ask when they were given the floor?

And why didn’t somebody ask Clinton and Obama how they can wholeheartedly support abortion, including partial birth abortion, if they don’t know when life begins? Where is the morality in that? And where’s the compassion in jamming scissors into a baby’s neck?

Brown did ask “end of life” questions of both candidates. Apparently, it didn’t occur to either of them, or the hosts or audience, that abortion is an end of life question that Obama and Clinton had already answered.

For further reflection on the fallacy of “potential life,” see the author’s essay.