Jane Robbins
|
Posted: Aug 31, 2018 12:01 AM
Share   Tweet
The opinions expressed by columnists are their own and do not necessarily represent the views of Townhall.com. 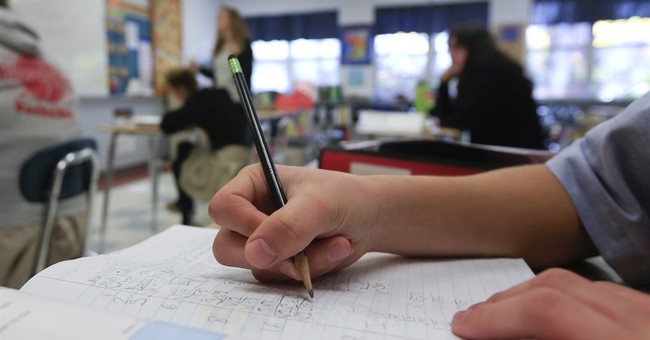 Proponents of the failed and destructive Common Core experiment refuse to let it go. Bill Gates, who funded a large chunk of Common Core development and marketing despite knowing essentially nothing about education, has yet to admit that it simply didn’t work out. Gates apparently believes there’s nothing wrong with Common Core that more of his money and invaluable guidance can’t fix.

The same obtuseness animates a new report from the Thomas B. Fordham Institute, which for some reason the press generally refers to as “conservative” or “right-leaning.” Fordham’s schtick for some years has been evaluating and assigning grades to state K-12 curriculum standards. The new report does this again, though not for all states but rather for 14 states in English language arts (ELA) and 10 states in math. The goal was to determine if the states that supposedly revised, replaced, or never adopted the Common Core standards now have better or worse standards than Common Core.

After an exhaustive analysis, or maybe not, Fordham awarded Common Core a score of 9 out of 10 and concluded that the “revising” states generally made things worse. Therefore, Fordham opined, these states should scurry back to the comfort of Common Core.

At the outset, bear in mind that no state that yielded to federal pressure to adopt Common Core has actually replaced those standards wholesale with a set of demonstrably good standards, such as the pre-Common Core standards from California, Indiana, or Massachusetts. In state after state, politicians and state-level educrats responded to public outrage over Common Core by pretending to change the standards – add one here, subtract one there, move some commas around and change the name. The result in some cases, as even Common Core critics agree, was further deterioration of the already deficient Common Core (for example, in Indiana and South Carolina).

So Fordham was examining patchwork con jobs rather than complete replacements of Common Core. What other information is relevant to Fordham’s new conclusions?

First, of course, is that Fordham is a paid mouthpiece for Gates and his Common Core cronies. Since the national standards were released in 2010, the Gates Foundation has paid Fordham almost $5 million for Common Core advocacy. In fact, as Fordham admits, Gates financed this very report.

Fordham has earned its money. It has resolutely defended Common Core from all attacks, regardless of how well-grounded, and made persistent excuses for failures that have been blindingly obvious to objective observers. This factor pretty much explains the Fordham reviewers’ 9-out-of-10 score for Common Core. (Perhaps awarding a perfect 10 would conjured up images of Soviet election results.)

Fordham apparently took no chances when choosing the reviewers to assess Common Core and various states’ “revised” standards. Four of the ten reviewers actually helped write the Common Core standards (see here and here), which suggests a certain lack of objectivity in this project. At least two others now serve as consultants to help schools and teachers make sense of Common Core (see here and here).  Another has worked with one of the Common Core testing consortia, and yet another has defended the heavily and appropriately maligned Common Core math standards in national publications (here). One might almost conclude that Fordham stacked the deck to get the results it wanted.

The report itself drifts in a fact-free bubble. There is not one word about the practical consequences of Common Core – that 1) scores on the National Assessment of Educational Progress (NAEP), including scores showing college readiness, actually dropped in 2015 for the first time in over 20 years, and generally flatlined at this dismal level two years later; 2) U.S. students’ performance on one international exam tumbled from fifth in the world to thirteenth; and 3) the achievement gap among student demographic groups is actually increasing. Instead, Fordham offers Monty Python-type insouciance:  “[i]nsofar as they have chosen to stick with the Common Core, most states now have excellent ELA and math standards. So, policymakers would do well to remember the most famous principle of sound medicine: ‘First, do no harm.’” And this breathtaking observation: The Common Core standards have “aged well.”

Fordham can endorse these remarkable views only by ignoring the educational deterioration that has only deepened since Common Core was imposed. National ELA experts such as Sandra Stotsky and world-renowned mathematicians such as James Milgram and Marina Ratner have warned for years about the emptiness of the national standards, and educational developments have proven them right. It is their warnings – not the Common Core standards – that have “aged well.”

To put it bluntly, Fordham’s credibility on the Common Core issue is shot. No amount of Gates money can fix that problem.