Cleaning up After Clinton and Gore

James Wanliss
|
Posted: Oct 14, 2016 12:01 AM
Share   Tweet
The opinions expressed by columnists are their own and do not necessarily represent the views of Townhall.com. 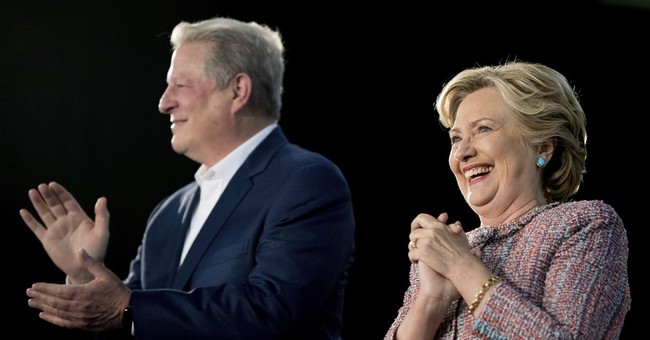 Hurricane Matthew has come and gone, leaving behind a soggy trail of flooding and tears. Matthew has been blamed for at least 38 deaths in the U.S., mainly from drowning due to floods that followed as it tore up parts of the southeast coast.

Hillary Clinton, following in Matthew's wake, barreled into Miami-Dade County on Tuesday to urge potential voters at a local college to support her presidential bid. She promised, and presented as one of her main selling points, to use the office of president to “step up our efforts to address climate change”. What does this mean?

It means that the government juggernaut of global warming spending, already unstoppable, will accelerate. Hundreds of billions of dollars have been burned away in feel-good schemes that actually do nothing for climate. She hailed the UN Paris climate agreement as the “last best chance to solve the global climate crisis” despite the fact that full implementation, costing over $1 trillion per year from 2030 to end of century, does nothing for climate. According to computer models global temperatures would drop by 0.3°F [0.17°C]. So she promises to spend more money chasing schemes that even her team knows will do next to nothing to solve the so-called problem. Is that not madness?

Clinton embraces and promises to extend policies that have already wreaked enormous havoc in economic and social conditions. Someone, after all, has to pay the bills for “saving the planet,” and it won’t be Clinton.

By her side, and grinning like a Cheshire cat at her promises, all of which will serve to increase his (and her) cash flow, was former VP Al Gore. The stage has been set, by powerful men like Gore and more powerful ones like George Soros, to squeeze global warming for all it is worth—which is trillions and trillions of dollars.

Gore’s Green investment arm, Generation Investment Management (GIM), is eager to leverage the trillions of dollars Clinton promises to suck out of the American economy as she chases utopian, environmentalist and global governance ideologies. The managing director of GIM is David Blood, the former CEO of bailed-out Goldman Sachs. Known as “Blood and Gore,” or just “The Carbon Empire,” GIM is a megalodon-mouthed whale that will vacuum up oceans of green cash hemorrhaging from the blows of environmental policy.

Mrs. Clinton blamed not only the hurricane but droughts and deadly wildfires on global warming. She would have been more accurate to blame wildfires on dark green environmental activism gone mad which results in policies prohibiting forest thinning, preventing proper treatment of insect infestations, and requiring second-rate fire suppressants. Instead of trying to make Matthew a poster boy for global warming alarmism Clinton might have mentioned that we still have an 11-year hurricane drought of Category 3 or greater failing to make landfall.

Clinton also listed the usual canards. She called those who question the wisdom of out of control environmentalist regulations and edicts “science deniers” and “climate deniers.”

I suppose this is nicer than other usual pejoratives, such as “climate criminals,” despite the allusion to Holocaust deniers. The term “global warming realist” seems better, not only because it is much more precise, but also because it is less amenable to Orwellian Newspeak. Fact is, anyone who can read a scientific chart can see there has been no warming trend from 1997 to the present. (The short-term warming of the first few months of 2016 is due to an unusually, but not unprecedentedly, strong El Niño in the south Pacific and does not constitute a trend.)

Furthermore, what precisely the “deniers” deny is never quite specified, since no one denies climate.

I do deny Clinton has the right to destroy a nation in the pursuit of what is, for some, grandiose and utopian green ideology. For others, perhaps for Clinton herself, it is all about money, and power. The devastation of a hurricane is a perfect metaphor for the potential that politicians like Clinton have to inflict harm as they not only deceive and mislead but also soak the electorate.