Jacob Sullum
|
Posted: Jun 17, 2020 12:01 AM
Share   Tweet
The opinions expressed by columnists are their own and do not necessarily represent the views of Townhall.com. 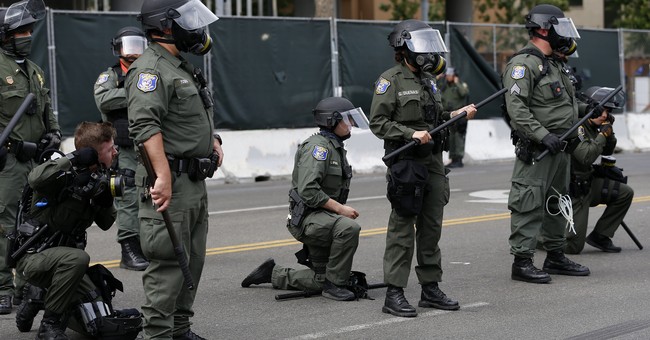 Many conservatives condemn the excessive force that killed George Floyd but reject the notion that such abuses reflect a broader problem of racial bias. "I don't think that the law enforcement system is systemically racist," says Attorney General William Barr, whose boss argues that the crimes of a few "bad apples" do not justify "falsely labeling tens of millions of decent Americans as racist."

Fair enough. But it is a serious mistake to dismiss stark, widely documented racial disparities in policing as a statistical mirage with no implications for equality under the law.

Sometimes, those disparities result from race-neutral policies. When police concentrate their resources in high-crime, low-income neighborhoods, for instance, they may impose disproportionate burdens on the people they are trying to help.

New York City's "stop, question and frisk" program, which at its peak in 2011 involved nearly 700,000 encounters between cops and pedestrians, was supposed to get guns off the street and curb violent crime. But nine times out of 10, those stops did not yield an arrest or even a summons, although each of them was supposedly based on "reasonable suspicion" of criminal activity.

Half the stops included pat-downs, ostensibly based on reasonable suspicion that the person was armed. Yet, the searches almost never discovered guns and rarely found weapons of any sort.

When nine out of 10 people subjected to such treatment, sometimes repeatedly, happen to be black or Hispanic, that pattern is troubling, regardless of the policy's intent. Likewise when blacks are nearly four times as likely as whites to be arrested for marijuana possession, even though they are only slightly more likely to be cannabis consumers, or when an irrational legal distinction between the smoked and snorted forms of cocaine -- a distinction initially supported by African American politicians -- means black defendants get substantially longer sentences than white defendants for essentially the same offense.

Other disparities are harder to explain. Among people who reported police encounters in a nationwide survey by the Bureau of Justice Statistics, blacks were 2.5 times as likely as whites to report that the officers had used or threatened force.

One study after another has found that black drivers are much more likely than white drivers to be searched during routine traffic stops, and those searches are less likely to discover contraband. That suggests racial bias, conscious or not, plays a role in deciding who seems suspicious.

In a 2016 speech, Tim Scott, the only black Republican in the Senate, explained what such disparities mean in practice, noting that he had been stopped by police seven times in a single year. "The vast majority of the time," he said, "I was pulled over for nothing more than driving a new car in the wrong neighborhood or some other reason just as trivial."

Scott has even been hassled by Capitol Hill police officers who thought he seemed out of place, notwithstanding the pin identifying him as a senator. He described a former staffer who was so tired of being mistaken for a car thief by D.C. cops that he traded in his Chrysler 300 for a less conspicuous model.

By the time he retired from the U.S. Navy after a 20-year military career, Theodore Johnson recalls in a National Review essay, he had been pulled over about 40 times, including one occasion during college when he spent a night in jail because his driver's license had recently expired. The cops stopped him because they assumed his cigar was packed with marijuana.

"Imagine the frustration, the irritation, the sense of a loss of dignity that accompanies each of those stops," Scott said. "I do not know many African-American men who do not have a very similar story to tell."

That story provides crucial context for the anger provoked by Floyd's death. One need not believe that every cop is a bigot, or that American society is irredeemably racist, to recognize that the problem goes beyond a few "bad apples."

Share this on Facebook
Tweet
We Have a New Term to Describe RINO Traitors Adam Kinzinger and Liz Cheney
Matt Vespa
Liberal Reporter Knows Why a Certain Media Narrative About COVID Vaccine and the GOP Arose This Week
Matt Vespa
The Country's Largest Healthcare Union is Protesting Against Vaccine Mandates
Katie Pavlich
As Biden Inflation Hits the Middle Class, This Cabinet Secretary Is Complaining About DC's Cost of Living
Spencer Brown
When Parents in Deep-Blue California are Appalled By Critical Race Theory, You Know There's a Problem
Matt Vespa
Make Women Sign Up for the Draft? Republicans Say No.
Zach Bauder