Jacob Sullum
|
Posted: Mar 06, 2019 12:01 AM
Share   Tweet
The opinions expressed by columnists are their own and do not necessarily represent the views of Townhall.com. 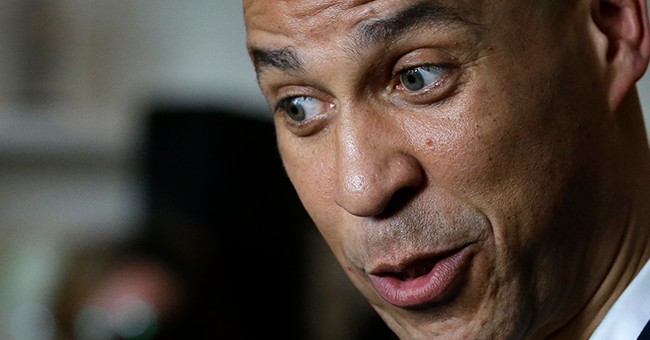 Cory Booker's Marijuana Justice Act, which he reintroduced last week, would rehabilitate the much-maligned plant by removing it from the federal government's list of proscribed substances. The New Jersey senator's bill also aims to rehabilitate the victims of that arbitrary ban, and in that respect, it departs from most of the legalization measures that have been passed by states or proposed by members of Congress.

By and large, the lingering impact of laws that criminalized peaceful activities involving cannabis has been addressed as an afterthought, if at all. Booker's bill, which he has made a conspicuous part of his campaign for the 2020 Democratic presidential nomination, therefore does a real service by raising the issue of what the government owes to people who were convicted of doing things that are no longer crimes.

The bill, which is co-sponsored by four other presidential contenders, would allow people currently serving time in federal prison for violating marijuana prohibition to seek resentencing "as if" the ban had not existed when they committed their offenses. That provision could conceivably free thousands of people, depending on how judges respond to such petitions.

The Marijuana Justice Act also requires expungement of records related to "marijuana use or possession offense(s)." Such offenses account for the vast majority of marijuana arrests, but almost all of those cases are handled by state courts, so it's not clear how many people would benefit from this provision.

Continuing to serve time for crimes that no longer exist seems clearly unjust, a point that was widely recognized after the repeal of alcohol prohibition. In 1933, for instance, Gov. Paul McNutt of Indiana issued pardons or commutations to about 400 people who had been convicted of alcohol offenses under state law. "If these men were kept in prison after the liquor law is repealed," he said, "they would be political prisoners."

Even for people who have completed their sentences, punishment continues. Police have arrested people for violating marijuana prohibition about 20 million times in the last three decades alone, and the resulting records impose long-lasting burdens.

Depending on the jurisdiction and the classification of the offense, people who were caught violating marijuana laws may lose the right to vote, the right to own a gun, the right to drive a car (for up to a year), the right to live in the United States (for noncitizens) and the right to participate in a wide variety of professions that require state licenses. They may find it difficult to get a job, rent an apartment, obtain student loans or travel to other countries. They may even be barred from coaching kids' sports teams or volunteering in public schools.

The employment consequences can be explicit, as with state laws that exclude people convicted of felonies from certain lines of work, or subtle, as with private businesses that avoid hiring people who have criminal records, possibly including arrests as well as convictions, because of liability concerns. "There is no limit to how much you can discriminate against a person with a criminal record," observes Douglas Berman, a sentencing expert at Ohio State University's Moritz College of Law.

Such ancillary penalties seem especially unfair and irrational in the growing number of U.S. jurisdictions that have legalized marijuana for recreational use, which so far include 10 states, the District of Columbia and the Northern Mariana Islands. California has gone furthest to address the problem: The state's 2016 legalization initiative authorized expungement of marijuana records, and a 2018 law makes that process easier.

Other states offer various forms of relief, ranging from generous to nearly nonexistent. All of them put the onus on prohibition's victims to seek the sealing or expungement of their criminal records, a process that can be complicated, expensive and time-consuming.

Automatic expungement is the least the government can do for millions of Americans who continue to suffer for actions that violated no one's rights. "The end we seek is not just legalization," Booker says. "It's justice."