Jacob Sullum
|
Posted: Jul 25, 2018 12:01 AM
Share   Tweet
The opinions expressed by columnists are their own and do not necessarily represent the views of Townhall.com. 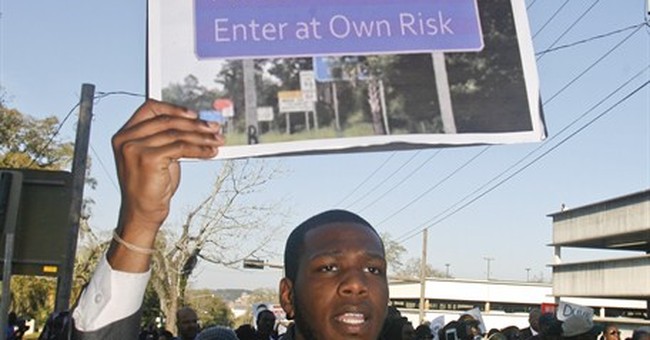 Markeis McGlockton and Michael Drejka both overreacted during their brief, fatal encounter in the parking lot of a Florida convenience store last week. McGlockton overreacted by pushing Drejka to the ground, and Drejka overreacted by drawing a pistol and shooting McGlockton in the chest.

Although it is hard to see how Drejka's use of lethal force could have been justified, Pinellas County Sheriff Bob Gualtieri declined to arrest him, claiming his hands were tied by Florida's Stand Your Ground law. But that is not true, and Gualtieri's misrepresentation of the law has renewed misguided criticism of Florida's approach to self-defense, which contrary to popular misconception does not give a free pass to armed hotheads who claim to have fired out of fear.

The incident that ended in McGlockton's death began when Drejka approached Britany Jacobs, McGlockton's girlfriend, as she sat in her car outside the Circle A Food Store in Clearwater. Drejka was upset that Jacobs had parked in a handicapped spot, and the ensuing argument attracted the attention of McGlockton, who was in the store buying candy for his 5-year-old son.

Video from a surveillance camera shows McGlockton emerging from the store, walking straight up to Drejka, and pushing him down. Within five seconds, Drejka, sitting on the ground, draws a gun and fires once. McGlockton staggers back into the store, grabbing his chest.

After collapsing in front of his son, McGlockton was taken to a hospital, where he was pronounced dead. Drejka, who has a concealed carry permit, told police he fired because he was afraid McGlockton was about to attack him again.

"We're precluded from making an arrest in this type of a situation," Gualtieri claimed at a press conference the next day. "Stand Your Ground allows for a subjective belief by the person that they are in harm's way," the sheriff said, and "we don't get to substitute our judgment for Drejka's judgment."

To the contrary, the law requires police and prosecutors to assess the judgment of someone who uses deadly force, which he is allowed to do only if he "reasonably believes" it is "necessary to prevent imminent death or great bodily harm." It is not enough to claim you shot someone because you believed he otherwise would have killed or maimed you; that belief has to be reasonable in the circumstances.

The video shows McGlockton backing away when Drejka draws his gun. Even assuming that McGlockton was not done with Drejka after the shove, Gualtieri conceded that Drejka "probably could have" fended McGlockton off simply by brandishing the pistol. The implication is that Drejka did not reasonably believe shooting McGlockton was necessary, which means there was probable cause to arrest him.

Gualtieri obscured that point by erroneously asserting that the Stand Your Ground law, which was enacted in 2005, established a "largely subjective standard" for the use of lethal force. The question, he said, is not "what I would do, what you would do, what the public would do, what someone else would do." What really matters, he suggested, is "the person's subjective determination of the circumstance they were in" and "the fear that they had."

Not so. Because a shooter's assessment of the situation has to be reasonable (even if it ultimately proves to have been mistaken), it does matter what other people would do in the same circumstances. In that respect, Florida's criteria for self-defense did not change in 2005, and they are similar to those that apply throughout the country.

The signature feature of Florida's Stand Your Ground law, as the moniker suggests, is that people attacked in public places do not have a duty to retreat. But that rule, which most states have adopted and Gualtieri said he supports, did not figure in the sheriff's decision.

Gualtieri emphasized that someone who legally uses force in self-defense is immune from arrest under Florida law. But he never satisfactorily explained why that description applies to Michael Drejka.