Jacob Sullum
|
Posted: Jun 06, 2018 12:01 AM
Share   Tweet
The opinions expressed by columnists are their own and do not necessarily represent the views of Townhall.com. 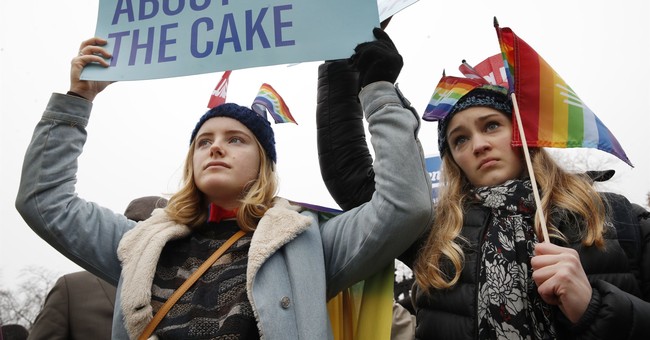 Kamala Harris, a Democratic senator from California, says Jack Phillips should have been forced to bake gay wedding cakes because "our constitution requires equal protection under the law." Ted Cruz, a Republican senator from Texas, says this week's Supreme Court ruling in Phillips' favor is "a major victory for religious liberty," upholding the Colorado baker's "constitutional right to live according to his faith."

Although Harris and Cruz are both lawyers, they are both wrong. Harris conflates discrimination by individuals with discrimination by the government, while Cruz overlooks the Supreme Court's approval of laws based on that false equivalence.

Contrary to what Harris seems to think, the "equal protection of the laws" guaranteed by the 14th Amendment is a constraint on state and local governments, not private citizens. It does not require Phillips, who owns Masterpiece Cakeshop in Lakewood, a Denver suburb, to bake cakes for wedding ceremonies that offend his religious beliefs.

Contrary to what Cruz seems to think, the Supreme Court did not say such a requirement would be unconstitutional. Its decision hinged on the anti-religious prejudice reflected in comments by members of the Colorado Civil Rights Commission and in that agency's inconsistent handling of complaints against bakers under the Colorado Anti-Discrimination Act (CADA).

"The Commission's treatment of Phillips' case violated the State's duty under the First Amendment not to base laws or regulations on hostility to a religion or religious viewpoint," Justice Anthony Kennedy writes in the majority opinion, which was joined by six other justices. "Whatever the outcome of some future controversy involving facts similar to these, the Commission's actions here violated the Free Exercise Clause."

But for the evidence of hostility to Phillips' faith, there can be little doubt that the Court would have rejected his religious freedom claim. Since 1990, the Court has taken the position that the First Amendment does not require religious exemptions from "neutral laws of general applicability," a category that includes CADA, which prohibits businesses from discriminating against customers based on their sexual orientation.

"The Court's precedents make clear that the baker, in his capacity as the owner of a business serving the public, might have his right to the free exercise of religion limited by generally applicable laws," Kennedy writes. "It is a general rule that [religious and philosophical] objections do not allow business owners and other actors in the economy and in society to deny protected persons equal access to goods and services under a neutral and generally applicable public accommodations law."

Kennedy says such laws aim to "protect the rights and dignity of gay persons who are, or wish to be, married but who face discrimination when they seek goods and services." He thus endorses the idea that one person, by virtue of his membership in a protected group, has a right to conscript another, forcing him to do work against his will.

The Court did not address Phillips' claim that compelling him to bake gay wedding cakes would violate his freedom of speech by making him endorse a message he rejects. "The free speech aspect of this case is difficult," Kennedy writes, "for few persons who have seen a beautiful wedding cake might have thought of its creation as an exercise of protected speech."

Unless the Court ultimately endorses that proposition, bakers with religious objections to gay weddings will have no constitutional defense against demands that they nevertheless supply cakes for them, as long as the officials enforcing that expectation keep their prejudices under wraps. As a commissioner who heard Phillips' case put it, "If a businessman wants to do business in the state and he's got an issue with the law's impacting his personal belief system, he needs to look at being able to compromise."

Kennedy says that comment "might be seen as inappropriate and dismissive," showing a "lack of due consideration for Phillips' free exercise rights and the dilemma he faced." If so, the dismissiveness is part of the Court's jurisprudence.