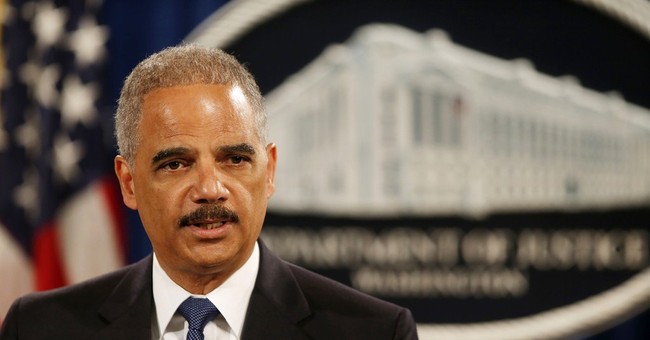 In 1996, when he was the U.S. attorney for the District of Columbia, Eric Holder urged the D.C. Council to reinstate mandatory minimum sentences for nonviolent drug offenses, which it had abolished in 1994. Two decades later, as an attorney general who has repeatedly criticized "draconian" mandatory minimums and sought to limit their use, he faces resistance from the federal prosecutors he oversees.

Holder alluded to that resistance in a speech to the National Association of Criminal Defense Lawyers last Thursday, saying, "Any suggestion that defendant cooperation is somehow dependent on mandatory minimums is plainly inconsistent with the facts and with history." More to the point, coercing "cooperation" cannot be the overriding goal of criminal penalties, which must be constrained by principles of fairness and proportionality.

Consider what can happen to recalcitrant defendants who insist on going to trial. Last year, Roy Lee Clay, a Baltimore heroin dealer who turned down a plea deal under which he would have served 10 years in prison, received a mandatory life sentence after he was convicted and federal prosecutors invoked sentencing enhancements based on his prior offenses. In 2005, the same sort of enhancements resulted in a life sentence for Roderick "Rudd" Walker, a Deadhead from Buffalo, New York, who was offered an eight-year sentence for pleading guilty to LSD charges.

In my view, no one should go to prison for engaging in consensual transactions. But even if you think that Clay and Walker deserved to do time, a life sentence cannot be appropriate if prosecutors were initially prepared to give them a term of a decade or less.

When you see the stark choices that federal defendants face, you can begin to understand why an astonishing 97 percent of them decide to plead guilty. The bigger the gap between the sentence a defendant can get through a plea bargain and the one he will get if he is convicted after a trial, the stronger his incentive to "cooperate" -- and the weaker the system's claim to be doing justice.

Holder clearly is right that plea bargains do not require mandatory minimums. But from the perspective of prosecutors who are single-mindedly focused on obtaining convictions as expeditiously as possible -- and terrified of what might happen if a substantial portion of defendants started asserting their Sixth Amendment rights -- there is no reason to give up the enormous leverage that mandatory minimums provide.

"Mandatory minimum sentences are a critical tool in persuading defendants to cooperate," said the National Association of Assistant United States Attorneys in a January letter to Holder. Testifying on behalf of that group before a Senate Judiciary Committee task force last May, a former federal prosecutor argued that "strong mandatory minimums" are "critical" to "induc(ing) cooperation from the so-called small fish to build cases against kingpins and leaders of criminal organizations."

The NAAUSA is so committed to resisting reform that it even opposes making sentence reductions retroactive. In a letter to the U.S. Sentencing Commission last month, the group argued that "allowing an individual sentenced under a plea agreement to have his sentence reduced retroactively prevents the government from obtaining benefits gained through concessions during bargaining." I'm not sure how that works, but I assume it involves time travel.

The NAAUSA's objections did not deter the commission from approving a policy that will allow some 46,000 federal prisoners to seek sentence reductions averaging about two years. Nor should they deter Congress from approving the Smarter Sentencing Act, a bill backed by Holder and several prominent Republicans that would make statutory reductions in crack sentences retroactive, cut the mandatory prison terms for certain drug offenses in half, and expand the "safety valve" that allows some low-level, nonviolent offenders to avoid mandatory minimums.

At some point the interests of justice have to outweigh the interests of prosecutors. We surely have passed that point when the penalty for exercising your constitutional right to a trial can be spending the rest of your life in prison.