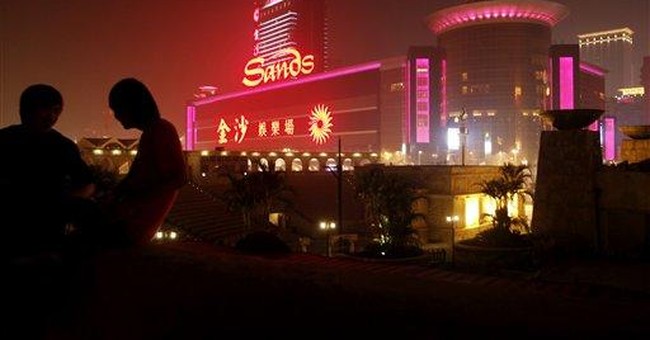 Instead, IT issued rules requiring financial institutions to adopt "policies and procedures" that are "reasonably designed" to block transactions associated with unlawful Internet gambling, whatever that might be. Last week, acknowledging the difficulty of satisfying this demand, federal regulators announced that enforcement of the rules, scheduled to begin on Dec. 1, will be delayed until June 1. The six-month extension gives Congress time to reconsider its foolish and futile attempt to stop Americans from betting in their pajamas.

The regulations, required by the Unlawful Internet Gambling Enforcement Act (UIGEA), include a telling explanation of why the government chose not to create a list of bet-taking businesses that financial institutions should avoid. Because the UIGEA "does not set out the precise activities that are covered," the regulators say, "creating such a list would require the Agencies to formally interpret" the relevant state and federal laws. Since those laws are often ambiguous, "interpretations by the Agencies in these areas may not be determinative in defining the Act's legal coverage and could set up conflicts or confusion with interpretations by the entities that actually enforce those laws."

In other words, figuring out which forms of online betting are illegal is so complex and uncertain a task that federal regulators did not even attempt it. Yet that is what they expect financial institutions to do.

The reach of federal gambling laws has long been a matter of debate. While the Justice Department claims the Wire Act of 1961 bans all online gambling, for instance, operators of poker and casino Websites say it applies only to sports betting, a view endorsed by a federal appeals court. The Justice Department also maintains that online horse race betting is illegal, but the businesses that run sites like youbet.com disagree, and so do the states that license them. The UIGEA did nothing to resolve such disputes.

State gambling laws are likewise open to interpretation, especially when it comes to poker, a game of skill that, depending on whom you ask, may not even qualify as gambling. I. Nelson Rose, a Whittier Law School professor who is a leading authority on gambling law, notes that the UIGEA regulations allow a bank contemplating a relationship with an online gambling business to consider "a reasoned legal opinion that it does not engage in restricted transactions" as evidence of its licit status.

Since they could face penalties for helping a business later judged to be unlawful, American financial institutions have a strong incentive to eschew all Internet gambling, even when it's arguably legal. But there are plenty of ways to evade the UIGEA regulations, including paper checks, credit cards issued by foreign banks, and payments funneled through foreign intermediaries. Rose notes that regulators aren't even talking about preventing individuals from placing bets (which in most states is not illegal) or collecting their winnings.

This week, Rep. Barney Frank, D-Mass., chairman of the House Financial Services Committee, is holding a hearing on legislation that points the way out of this silly yet burdensome charade. He wants to legalize online gambling at the federal level and allow states to regulate it as they see fit. Frank says his opposition to gambling prohibition is inspired by a simple proposition: "If individuals like doing something and they harm no one, we will allow them to do it, even if other people disapprove of what they do."

Meanwhile, National Endowment for the Humanities Chairman Jim Leach, who was one of the UIGEA's main architects as a Republican congressman from Iowa, is embarking on a 50-state tour to promote greater "civility" in political debates. Too bad he was not polite enough to keep his nose out of the private spaces where millions of Americans choose to spend their money on games that offend him.