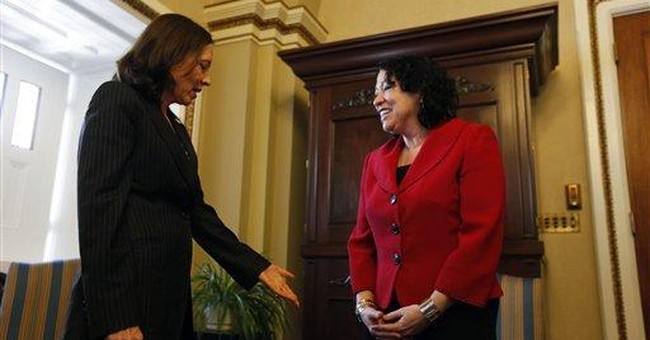 Such characterizations are based mainly on Sotomayor's participation in a January decision that said state and local governments are not bound by the Second Amendment. But because it was arguably compelled by a series of 19th-century Supreme Court precedents, Sotomayor's conclusion does not necessarily signal an anti-gun bias.

In an unsigned opinion by a unanimous three-judge panel that included Sotomayor, the U.S. Court of Appeals for the 2nd Circuit rejected a Second Amendment challenge to New York state's ban on nunchaku, the martial arts weapon consisting of two sticks joined by chain or cord. "It is settled law," the panel said, "that the Second Amendment applies only to limitations the federal government seeks to impose."

The appeals court cited Presser v. Illinois, an 1886 decision in which the Supreme Court said the Second Amendment "is a limitation only upon the power of congress and the national government, and not upon that of the state." That decision, which relied on the 1875 ruling U.S. v. Cruikshank, was followed in 1894 by Miller v. Texas, which said "it is well settled" that both the Second and Fourth amendments "operate only upon the federal power."

Nowadays, of course, federal courts routinely ask whether state or local governments have violated the Fourth Amendment's prohibition of unreasonable searches and seizures. According to the Supreme Court, that guarantee, along with others in the Bill of Rights, applies to the states by way of the 14th Amendment. The trio of 19th-century gun cases came after the 14th Amendment was ratified but before the Court began reading it to incorporate restrictions that had hitherto applied only to the federal government.

Now that the Supreme Court has said the Second Amendment protects an individual right to arms, applying it to the states, along with the First, Fourth, Fifth, Sixth and Eighth amendments, is the logical next step. A footnote in D.C. v. Heller, the 2008 case in which the Court overturned the District of Columbia's handgun ban, suggests it is leaning in that direction: "With respect to Cruikshank's continuing validity on incorporation, a question not presented by this case, we note that Cruikshank also said that the First Amendment did not apply against the States and did not engage in the sort of Fourteenth Amendment inquiry required by our later cases."

But are lower courts free to apply the Second Amendment to the states through this sort of analysis, as the U.S. Court of Appeals for the 9th Circuit did in April, or must they wait for the Supreme Court, as both the 2nd Circuit and the 7th Circuit have decided? Although the historical record makes it clear that the right to arms is one of the "privileges or immunities" protected by the 14th Amendment, Presser rejected that argument, citing an 1872 decision in which the Court took an unreasonably narrow view of the clause.

Presser also seemed to reject an incorporation argument based on the 14th Amendment's guarantee of due process, the rationale the Court used when it started applying the Bill of Rights to the states in the early 20th century. The Presser Court called the appellant's due process argument "so clearly untenable as to require no discussion." But in Miller, decided just eight years later, the Court was less firm on this point, declining to address the incorporation issue because "it was not set up in the trial court."

The bottom line is that an intellectually honest judge could have gone either way on the question of whether Supreme Court precedents foreclose incorporation of the Second Amendment. Sotomayor, a left-leaning Greenwich Village resident chosen by a president who never met a gun control he didn't like, probably is not a big fan of the Second Amendment. But this particular case does not prove it.