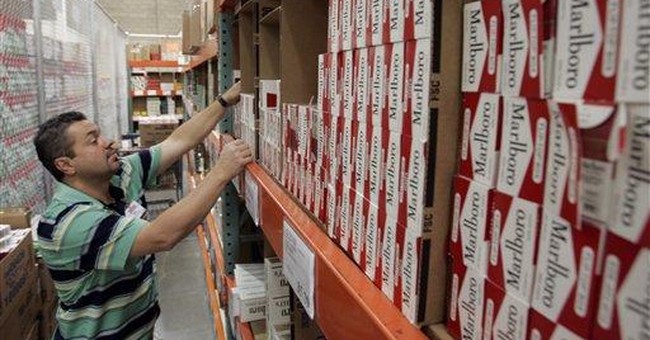 Tucked away in the Family Smoking Prevention and Tobacco Control Act, which was passed by the House in April and by the Senate this week, is a provision that speaks volumes about the law's impact. It prohibits manufacturers from making "any statement directed to consumers" that "would reasonably be expected to result in consumers believing" a tobacco product "is regulated, inspected or approved by the Food and Drug Administration."

The bill, which President Obama supports, authorizes the FDA to regulate tobacco products. Yet it says, "consumers are likely to be confused and misled" if they know the FDA is regulating tobacco products. They might mistakenly believe that FDA regulation makes these products safer, for example, when the opposite is the truth.

It's easy to understand why Philip Morris supported this bill. The market leader can expect to benefit from the limits on advertising and promotion, the regulatory burden on smaller competitors, and the ban on every "characterizing" flavor except the one it happens to use in some of its most successful brands (menthol). But the company may be wrong to believe that FDA regulation will allow it to pursue plans for safer cigarettes.

To introduce a "modified risk product," a manufacturer has to convince the FDA not only that the product will "significantly reduce harm and the risk of tobacco-related disease to individual tobacco users" but also that it will "benefit the health of the population as a whole, taking into account both users of tobacco products and persons who do not currently use tobacco products." Alternatively, if "scientific evidence is not available and, using the best available scientific methods, cannot be made available without conducting long-term epidemiological studies," the FDA can let a manufacturer advertise reduced levels of certain substances in cigarette smoke, but only if the agency decides it "would be appropriate to promote the public health."

This collectivist standard means the FDA can keep a product off the market even if it is indisputably safer than conventional cigarettes, based on fears that it will attract nonsmokers or smokers who otherwise would have given up tobacco entirely. That same hurdle applies to the promotion of existing products.

Consider snus (Swedish-style smokeless tobacco), which under the new law will continue to carry a warning that it "is not a safe alternative to cigarettes." Although that's literally true, since nothing is 100 percent safe, there's no question that snus is far less hazardous than cigarettes. Yet the FDA is now empowered to prevent manufacturers from saying so, lest consumers make an informed decision to use smokeless tobacco rather than abstaining completely.

Such censorship would sacrifice the lives of current smokers for the sake of a tobacco-free future. Likewise the mandated reductions in nicotine content authorized by the law, which would be aimed at making cigarettes less attractive to nonsmokers.

The predictable result of reducing nicotine content is that people will smoke more to get the dose to which they are accustomed. They will take more puffs, inhale more deeply, hold the smoke longer or consume more cigarettes. Consequently, they will be exposed to higher levels of toxins and carcinogens.

The authors of the law are familiar with such compensatory behavior. It's the reason they decided to prohibit the use of misleading cigarette terms such as "light," "mild" and "low tar," which are based on yields delivered to smoking machines rather than people.

Yet the attempt to mandate less addictive cigarettes would be even more dangerous than the industry's practice of reducing nicotine and tar yields simultaneously, since it would increase the tar-to-nicotine ratio. Somehow we're supposed to believe that the government's involvement transforms a life-endangering fraud into a life-saving public health intervention.

Since FDA regulation is apt to make cigarettes more hazardous while impeding competition from safer alternatives, you can begin to see why mentioning it might give consumers the wrong impression. I won't tell them if you don't.