The Left on George H.W. Bush: From 'Wimp' And 'Racist' to National Treasure

Jack Kerwick
|
Posted: Dec 06, 2018 12:01 AM
Share   Tweet
The opinions expressed by columnists are their own and do not necessarily represent the views of Townhall.com. 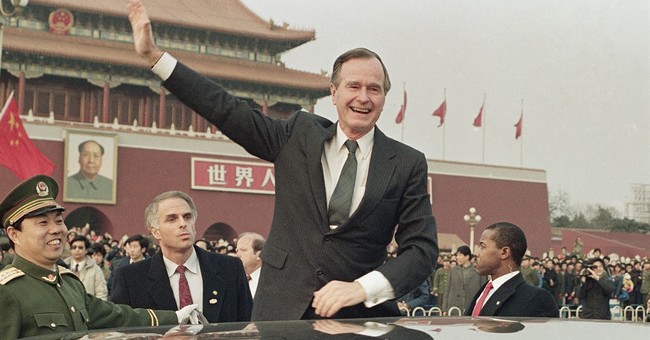 Democrats are either: chronically mistaken, chronically dishonest, or some mixture of the two.

With the passing of George H.W. Bush, as with the death of John McCain just a few short months ago, the public is treated to a grand display of political bipolar disorder, reinforcing Michael Savage’s diagnosis of “liberalism” as a “mental disorder.”

The late President Bush had been routinely savaged by some of the very same people who now equate his death with the passing of a “kinder, gentler” politics.  Yet it was precisely Bush Sr.’s kind and gentle affect that rendered him vulnerable to the Democratic left’s charge that he was a “wimp.”

From Newsweek to the creator of the comic strip Doonesbury and a plethora of places in between, Bush was depicted as a man who understandably invited the public to perceive him as being insufficiently strong for the position of the American Presidency.  In fact, such was the sting of Newsweek’s, “George Bush: Fighting ‘the Wimp Factor’,” that the Bush campaign barred the Democratic-friendly publication access to it.

Recall, Bush was a man who, at 18, left Yale to voluntarily enlist in the military after the outbreak of World War II.  He became the youngest fighter pilot, flying 58 combat missions, earning the prestigious Distinguished Flying Cross.  Bush also ran the Central Intelligence Agency.

And yet, despite this record (to which we can obviously add his position as Ronald Reagan’s Vice President for the President’s two terms during the final years of the Soviet Union), the Democrats in D.C. and their apologists in the media, branded Bush a wimp.

But not only was Bush a wimp, a weakling.  He was also—what else?—a racist.

In the popular cultural consciousness, Bush’s name will forever be linked with that of Willie Horton.  Horton was a convicted murderer who was serving a life sentence in Massachusetts when he was released for a weekend furlough courtesy of a program supported by the state’s governor, Michael Dukakis.  The problem, though, is that Horton did not return to prison but, instead, headed for Maryland where he stabbed, bound, and gagged a man while pistol-whipping and twice-raping the man’s fiancé.  Subsequently, Horton stole his victims’ car.  He was shot and apprehended by some of Maryland’s Finest.

Such was the egregiousness of Horton’s offenses that a judge refused to extradite him to Massachusetts on the grounds that he feared Horton, a lowlife who “should never draw a breath of free air again,” would once more be released from jail.

Horton was sentenced to two consecutive life sentences plus 85 years.

The Bush campaign exploited this outrage by calling the nation’s attention to the fact that his opponent, Governor Dukakis, presided over the release of this dangerous criminal.  To most of us, this seems like more than fair game, a travesty of justice to which an electorate about to elect a new president had to be informed.  To the Democratic left, however, what Bush did was unforgivable and remains the most shameful aspect of his legacy.

The problem, you see, is that Horton is black.

Digest this: A convicted murderer, upon being released from prison for just a single weekend, commits armed robbery, rape, and assault, and all because of a program enthusiastically embraced by the governor of his home state, a politician who also is running to become the President of the United States of America and, thus, whose judgment the “Willie Horton” ad was meant to call into question.

But because the criminal in the ad happened to have been black, it is those drawing attention to the outrage that have been condemned as moral reprobates.

Had Horton been white—and had he been white, can there be little doubt, given the abominable nature of the whole episode, that the Bush campaign still would’ve run an ad over it?—the left’s take on this would’ve been entirely different.  Nor would we still be talking about it over 30 years later.

It wasn’t just Bush who had been blasted as a “racist.”   His predecessor, Reagan, was also on the receiving end of this smear.

In November of 1980, Coretta Scott King wrote: “I am scared that if Ronald Reagan gets into office, we are going to see more of the Ku Klux Klan and a resurgence of the Nazi Party.” Newsweek said of Reagan that he portrayed black women as “welfare queens.”

John McCain, too, was eviscerated for being “racist” when he dared to frustrate the presidential aspirations of Barack Obama in 2008.  Noting the glaring contrast between the fawning media coverage of McCain upon his death and the overwhelmingly negative coverage that he received when he campaigned against Obama ten years earlier, Joe Concha, writing in The Hill, notes that from between the close of the Republican National Convention in September through the time of the first presidential debate in October, the media take on McCain was negative by a 4:1 ratio.  This means that 57% of the coverage was negative.

On the other hand, only 29% of the media’s coverage of Obama was negative.

Concha reminds readers of some other telling facts:

The McCain campaign released an ad featuring images of Paris Hilton and Brittany Spears juxtaposed with an image of Obama. The New York Times referred to it as “racially tinged.” Liberal Democrats charged Team McCain with “running crypto-racist ads,” of being “deliberately and deceptively racist,” with “pushing the caricature of Obama as a uppity young black man whose presumptuousness is displayed in not only taking on airs above his station but also in a taste for young women,” and “creating a political environment that is inciting hate and hate speech.”

One needn’t be an admirer of any of the aforementioned Republicans (as I am not) to discern the point that I’ve been making here, the point that those Democrats who despised them in life while loving them in death have either been dishonest or grossly mistaken.

Either way, the message conveyed by these Democrats is simple and straightforward enough: the only good Republican is a dead Republican.