An Open Letter to David Hogg

Jack Kerwick
|
Posted: Apr 10, 2018 10:48 AM
Share   Tweet
The opinions expressed by columnists are their own and do not necessarily represent the views of Townhall.com. 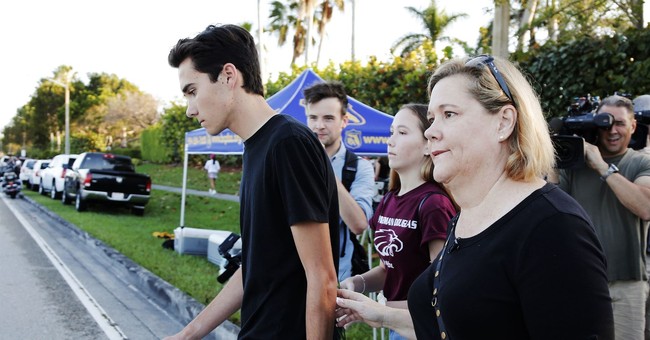 Let me begin by expressing my condolences for the losses that you and the members of your school community suffered on that infamous day.

My heart goes out to you also for the sheer terror that you personally must have experienced in that situation. No one, least of all a young school student, should be made to endure the agony that you and your peers doubtless endured.

As you know, while you’ve achieved fame since that fateful day, you’ve achieved infamy as well. Admittedly, though I find it impossible not to admire your determination to draw meaning from the carnage and the chaos that Nikolas Cruz left in his wake, I reject every bit as much as any of your harshest critics both the cause that you champion as well as some of the methods that you’ve been employing for the sake of promoting that cause.

However, given your circumstances—the mass shooting that you survived, the loss that you suffered, and your young age—I’d rather give you some food for thought than hurl accusations and invective at you.

Those of your conservative critics who haven’t blasted you directly, particularly conservative media figures who, in order to avoid the treatment to which you and your leftist colleagues have recently subjected Laura Ingraham, have sought to excuse your words and deeds on the grounds that you’re being “used” by adult ideologues are guilty of the worst condescension.

In the first place, this line of criticism—and it is a veiled criticism—assumes that you and your peers are but brainless puppets without beliefs of your own. But surely, at nearly 18 years of age—an age at which these same critics have no problems sending off Americans to die overseas in foreign wars and granting others the right to vote—it should be assumed that the views you espouse are your own.

There is, however, another reason why this conservative critique is misplaced, and fundamentally so.

You are being used. This, though, doesn’t mean that there’s anything morally objectionable about the arrangement that’s been established between you and your backers. The great 18th century philosopher Immanuel Kant made explicit a distinction that can’t fail to resonate with any human being that’s been alive for more than a few years. Kant noted a difference between, on the one hand, treating a person as a means to an end and, on the other, treating a person merely as a means. Generally speaking, the former is morally permissible. The latter, though, is never permissible.

When my car has problems, I use my mechanic as a means toward repairing it. He in turn uses my money as a means toward his income. Yet there is nothing objectionable about this relationship of ours as long as neither party treats the other merely as a means via dishonesty, manipulation, etc.

To treat a person merely as a means is to objectify that person.

So, Mr. Hogg, while you and your peers, because you are young, suburban, and mostly white, are indeed being used as props for the left’s long-standing campaign against the Second Amendment to the United States Constitution, as long as you have consented to this arrangement and as long as you share the same end as that of your funders, you assume responsibility for your actions.

And it is precisely because you are responsible for your views and actions that I am going to hold you responsible by posing the same challenges to you that I have posed to other Second Amendment-deniers.

Mr. Hogg, you and several of your peers now demand what you refer to as “gun-control.” Evidently, Mr. Hogg, you believe that the tens of thousands of federal and state gun laws that already exist on the books are inadequate to the task of preventing violent actors from obtaining and using firearms to slaughter innocents. This being so, I have a question:

What heretofore non-existent “gun” law do you think would’ve prevented Nikolas Cruz from rampaging through the halls of your high school?

Neither you nor anyone else of whom I’m aware, despite your incessant clamor for “gun-control,” has yet to specify the content of that miracle law that you assume will “keep our children safe.”

Now, this being said, it’s less inexcusable that you and your fellow teenaged Second Amendment-denying crusaders are silent on this score than are the adults who have educated you and those grown-ups who organize and fund your activities. They’ve had more experience in the real world, so to speak, and should know that the brute fact of the matter is that in spite of the thousands upon thousands of restrictions on and regulations of the exercise of the Second Amendment that have existed for years, people who are determined to take innocent lives via firearms are still able to acquire them.

These adults, like yourself, demand—you all always demand—that the federal government “do something” about what you call “gun violence.” But, unavoidably, you never specify exactly what should be done in order to prevent that “gun violence.”

If you really want to prevent murder by firearm, why not demand that the government criminalize murder, and criminalize it by assuring for it the harshest of penalties—maybe life in prison, or even capital punishment?

If you really want to prevent mass shootings, why not demand that the government make it illegal to commit a mass shooting? Or maybe you can demand that no one be permitted to take guns to school campuses?

I don’t get the impression that you’re an unintelligent young man, Mr. Hogg. I’m sure you see the point of these facetious questions:

If a person who is determined to commit murder is not going to be deterred from doing so by the threat of life behind bars and possibly execution, then he certainly won’t be deterred by the fact that he may have to obtain his weapon of choice in the black market because he can’t buy it legally at Dick’s Sporting Goods.

“Gun-control” has got to be among the most intellectually indefensible positions ever. You and your peers are young enough to recognize this now. Please give it some thought.