Jack Kerwick
|
Posted: Apr 13, 2017 12:01 AM
Share   Tweet
The opinions expressed by columnists are their own and do not necessarily represent the views of Townhall.com. 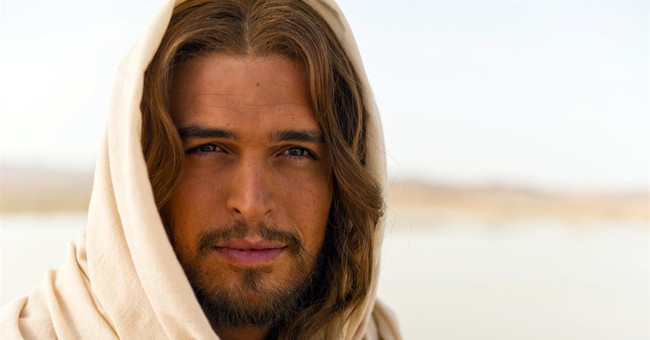 In a recent article, I delineated the features of a figure to which I referred as “Jesus Now.”

Jesus Now is the Jesus, perhaps the only Jesus, with whom millions of contemporary American Christians are familiar.  Churchgoers are no different in this respect, for it is from their clerics that they hear about Jesus Now week after week.

Jesus Now is a man of our times, a liberal progressive whose Politically Correct moral and political sensibilities are unassailable.  He preaches “tolerance,” “inclusivity,” and, importantly, he is “non-judgmental.”  Moreover, Jesus Now is largely indifferent to whether people even believe in him—just so long as they are “good” people.

Of course, it is not quite correct to say of Jesus Now that he judges no one.  But his judgment is extremely selective.  He adversely judges white, affluent, Western Christians.  Everyone else is given a pass.

In glaring contrast, the Real Jesus (who will be referred to from now on simply as “Jesus”), being the Author of the Heavens and the Earth, the Sovereign Ruler of all creation, is the Judge Incarnate.

Jesus is hardly the meek and mild, the non-threatening (and wildly boring) fiction that is peddled in all too many churches.  Actually, He spends quite a bit of time—most, it seems—expressing anger.  On at least one occasion, such was Jesus’s indignation that He engaged in conduct that would land me or you in jail:

When merchants were doing what they always did and engaged in commercial activities in the Temple, Jesus besieged them, knocking over their tables and displays and driving them out with a whip.

Jesus was as scathing toward His disciples as He was toward His opponents. He continually castigated His friends and followers alike for their lack of faith and, during His Sermon on the Mount, referred to them as “evil” (Lk 11:13).  Peter, on whom He would build His church, He called “Satan” when the former implored his master to avoid His impending death (Mt 16:23). This generation, Jesus remarked, was both “evil and adulterous” (Mt 16:4).

Nor was this the only time, or the scribes and Pharisees His only rivals, with whom Jesus threatened eternal violence.

During the Great Commission, He instructed His disciples to turn their backs on those who refused to welcome them, “to shake off the dust from your feet as you leave that house or town.” Jesus assured them: “Truly I tell you, it will be more tolerable for the land of Sodom and Gomorrah [cities that God destroyed] on the day of the judgment than for that town” (Mt 10:1-15; Mk 3:13-19; Lk 6:12-16).

As for the residents of those cities in which Jesus performed “deeds of power” but who refused to repent, He promises to visit destruction upon them.  “Woe to you, Chorazin! Woe to you, Bethsaida!  For if the deeds of power done in you had been done in Tyre and Sidon [more cities that had been destroyed by God], they would have repented long ago….”  But because there has been no repentance, the fate of these cities will be worse than that of the cities of yesteryear that God eliminated.

Jesus frequently spoke in parables invoking the imagery of slavery and war.

To allude to just one parable, Jesus contrasts the faithful and wise slave with the unfaithful and wicked one.  The former is dutiful and prepares for his master’s return home.  The latter is lazy and nasty to his fellow slaves.  Of the wicked slave, Jesus tells us, his “master…will cut him in pieces and put him with the hypocrites, where there will be weeping and gnashing of teeth” (Mt 24:45-51; Lk 12:41-48).

Regarding the cost of discipleship, Jesus said: “Or what king, going out to wage war against another king, will not sit down first and consider whether he is able with ten thousand to oppose the one who comes against him with twenty thousand?” (Lk 14: 31).

He encouraged—commanded, in fact—His disciples to arm themselves with swords (Lk 22:36).

As for ecumenism, Jesus was having none of it: There would be no half-measures when it came to belief in Him.  Either one believed in Him or one did not.  He promised to bring, not peace, but “the sword.”  He promised that He would divide human beings in a manner and to a degree that had never been seen.

Even those who are convinced of their own Christian discipleship and who perform good works may find themselves being denied eternity with God.  “Not everyone who says to me, ‘Lord, Lord,’ will enter the kingdom of heaven, but only the one who does the will of my Father in heaven,” He tells us. “On that day [the Day of Judgment] many will say to me, ‘Lord, Lord, did we not prophesy in your name, and cast out demons in your name, and do many deeds of power in your name?’”  Jesus gives us His answer: “Then I will declare to them, ‘I never knew you; go away from me, you evildoers’” (Mt. 7:21-23; Lk 13: 26-27).

Between the Real Jesus and Jesus Now, it should be obvious, there is an unbridgeable chasm.