Jack Kerwick
|
Posted: Jan 04, 2016 12:01 AM
Share   Tweet
The opinions expressed by columnists are their own and do not necessarily represent the views of Townhall.com. 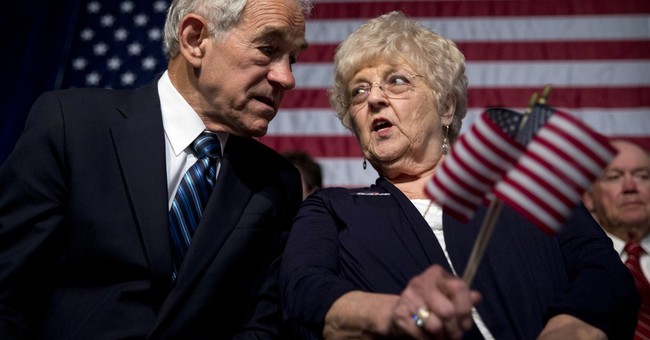 While appearing on Alan Colmes’ radio show some months ago, former presidential candidate Ron Paul expressed his belief that Trump is “almost the opposite of a libertarian” candidate.

Trump, according to Paul, never expresses his desire to “give you your freedom and your liberty to run your life as you choose.” Rather, he in effect assures us: “I know the answers and I’m going to do this and I’ve done this, I’ve done this, this and this.”

Surely, Paul is on to something. That being said, the following considerations should be borne in mind.

First, that Paul rejects Trump for not being a libertarian implies that he thinks that only a presidential candidate (or any kind of candidate?) who is a libertarian deserves the support of liberty-minded voters. Presumably, this in turn is because Paul thinks that only libertarian candidates intend to restore the Republic of individual liberty bequeathed to Americans by the Founders.

But libertarians, to an arguably greater extent than partisans of any and all other stripes, know that intentions are overrated. Intentions needn’t have any bearing on the goodness or badness, the desirability or undesirability, of an action.

A greedy businessman, say, may want nothing more than to cheat his gullible customers. Yet he thinks that ultimately he will make greater profits if he treats them honestly and establishes for himself a reputation of being an honest businessperson. Another businessperson is a “racist” who personally would prefer to hire and trade only with his co-ethnics. But realizing that there is much more money to be gained by supplying goods to other ethnic communities, self-interest prevails over his idiosyncrasies. And thanks to self-interest, potato farmers in Idaho awake before sunbreak every morning so that untold numbers of strangers in distant states can have potatoes with their steaks.

Libertarians are the first to realize that the intentions of individuals are utterly irrelevant to evaluating the goodness or otherwise of their actions in the private sector (or economic realm).

Do intentions now suddenly assume categorical importance once they play out in the public sector?

Secondly, no candidate—including Ron Paul himself—will govern as a libertarian.

That’s right: Every candidate who runs for the presidency—and this, obviously, includes three-time presidential candidate Ron Paul—couldn’t govern as a libertarian even if they wanted for nothing more than to do so.

Take Paul as an example. Paul endorses the federalist scheme of government and liberty as it was delineated by the Framers of the United States Constitution. However, from its ratification to the present day, our Constitution has been twisted and stretched to the point that its present day manifestation can hardly be said to be recognizable to its 18th century counterpart.

We are living in a Post-Constitutional Order (PCO).

Nothing less than a “fundamental transformation” of present governmental arrangements is required if any “constitutionalism” worth the name is to prevail.

In fact, even this prescription is wide of the mark, for it isn’t just the size and scope of government that must be revolutionized. So too must the mindset—the beliefs, values, conceptual categories—of the vast majority of Americans who have by now endured multiple generations of being habituated into accepting as axiomatic all sorts of profoundly unconstitutional ideas about the government’s relationship to a free citizenry.

Indeed, no kind of president promises to be as aggressive an activist politician as a libertarian president.

Ron Paul, like his son, knows this better than anyone. After all, as a libertarian committed to “states’ rights,” Paul should’ve been content remaining in state and local government. But Paul continually set his sights on the White House. Why? The answer is clear: It is as President, but only as President, that Paul could exert the immeasurable power and influence necessary for prosecuting his vision for America.

Paul was no different than any other candidate insofar as he too assured voters of what he would do and what he would make possible once those voters granted him the power to do so.

Both Pauls accept the premise, then, of a strong, centralized government.

Now, none of this is to knock either of the Pauls. Nor do I mean to imply that the Pauls aren’t genuine lovers of liberty or “Constitutionalists.” Rather, the take away from all of this is that even if—no, especially if—a President Paul sought “libertarian” or Constitutional ends, he would, of necessity, given the current mess, have to engage in an uninterrupted exercise in activist governing.

Paradoxically, a libertarian president, for practical purposes, will look upon the government in a manner that is as far from that of the libertarian ideal as any.

He must regard it as an agent of “fundamental transformation.”

President Paul would have to avail himself of every quantum of power available to occupiers of this office if he wished to trim it down to its original, Constitutional size.

Of course, no liberty-minded politician, even if he (or she) held “the most powerful position in the world,” will manage to accomplish remotely as much as he’d like. Yet libertarians wouldn’t judge him on whether his tenure climaxed with the inauguration of a libertarian idyll.

Libertarians would judge him on what he did while in office to undo some of the incalculable damage that the enemies of liberty had inflicted upon the country over generations.

They’d judge him on what he did to budge the country just a bit further toward that ideal.

Libertarians would judge a libertarian president on whether he exacerbated or, to even a minimal extent, diminished the post-Constitutional crisis.

These two preceding points brings us to our third.

That Trump is not a libertarian does not mean that none of his positions are libertarian. At any rate, his views on the robust interventionist foreign policy of the Establishment, the mess in the Middle East, Russia, etc. are (for the most part) libertarian-friendly. Domestically as well, Trump has sounded off on positions ranging from the Second amendment to immigration which are perfectly compatible with libertarianism.

In other words, even though Trump is not a libertarian, a Trump presidency could have the effect of weakening, however slightly, the PCO.

This is not an endorsement of Trump. Nor do I mean to suggest that any of this will happen in the event that Trump is elected to the presidency.

My objective in raising these considerations is to caution libertarians against denying reality in pursuit of an ideal to which even some of their heroes, like Ron Paul, could never so much as pretend to live up.

In denying this concrete reality in exchange for some dreamy abstraction, libertarians could miss opportunities for changing the reality for the better.