Nonsense That Kills: 'Police Brutality' as an 'Epidemic' 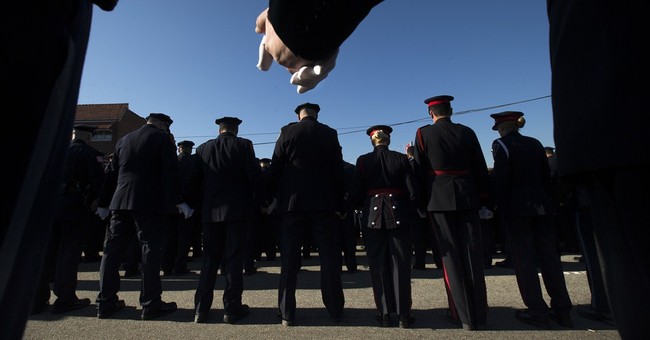 Recently, I claimed that everyone—politicians, academics, and media commentators—who promoted the idea that police brutality is a national “epidemic,” or even a “growing concern,” as one self-styled libertarian put it, share some culpability for the murders of the two NYPD officers who were gunned down in their vehicle right before Christmas.

More specifically, they are responsible, obviously, not for intending or consciously encouraging the murder of police, but for creating a climate for police officers that’s even more hostile than that in which officers must spend their days and nights. After all, we don’t need Richard Weaver to inform us that “ideas have consequences.” Even simpletons and liars will concede this much.

And only simpletons and liars can deny that this idea—the idea of a “pandemic” of police brutality sweeping the nation—has the consequence of endangering police officers.

Yet this idea isn’t just dangerous.

It is also a lie. And it is a huge lie at that.

“Police brutality” is an all-purpose piece of rhetoric that, as such, can mean anything and everything—and, thus, nothing at all. When anti-police misologists—a “misologist” was the word that the 18th century philosopher Immanuel Kant used when referring to an enemy of reason—sound off about “police brutality,” they are referring to the police’s unjustified use of force.

So, is this a growing national phenomenon, an epidemic?

According to the Department of Justice’s Office of Community Oriented Policing Services (COPS), in 1999, of 44 million people who had face-to-face interactions with police officers, less than one-half of one percent was “threatened with or actually experienced force.”

What this in turn means is that the number of people who were “brutalized” by police is even smaller than “less than one-half of one percent.”

According to the Bureau of Justice Statistics’ Police-Public Contact Survey (PPCS), of a national population estimate of roughly 240, 000,000 comprised of people of 16 years of age or older, of those who dealt with the police in some capacity in 2002, 2005, and 2008, 1.5%, 1.6 percent, and 1.4 percent, respectively, were either threatened with or subjected to force by the police.

In 2008, 22 percent of those falling into the latter group admitted that they “argued with, cursed at, insulted, or verbally threatened the police.” Twelve percent reported that they were “disobeying” and/or “interfering” with police.

Of the 84 percent of people who felt that the threat or use of police use force was “improper,” only 14 percent filed a complaint.

To further underscore just what a whopper of a lie is the notion that “police brutality” is a nationwide epidemic, consider this: Among those included in the class of people who have had to deal with police are those who have called on the police for assistance. And among those who have done so, about 85 percent claimed to have been “satisfied with the police response.” Moreover—shocker of shockers!—Hispanics (86 percent) and blacks (85 percent) were slightly more satisfied than were whites (83 percent). Finally, about 90 percent of people who requested police assistance said that they would do so again.

Only in the fevered imagination of the cop-hating ideologue is “police brutality” a national crisis, or any sort of crisis.

Of course, none of this is to deny that there are bad cops. Genuinely abusive police officers, like those who abuse their power and authority anywhere, deserve to be crucified. But there is zero justification for abstracting from these relatively few instances a rule encompassing police officers generally.

Numbers aside, just some rudimentary common sense—a rare commodity nowadays, and practically nonexistent among the police-hating ideologues—should determine that in this Age of the Camera—a time in which everyone and their mother is armed with surveillance apparatus—the police have no real option but to be better behaved than ever before.

Jeremy Bentham described the doctrine of “natural rights” as “nonsense on stilts.” The dogma—and make no mistakes about it, for the anti-police misologists, this is nothing less than a dogma—that “police brutality” is an epidemic, a crisis, blah, blah, blah, is indeed nonsense on stilts. But it is more than this: It is nonsense that kills.