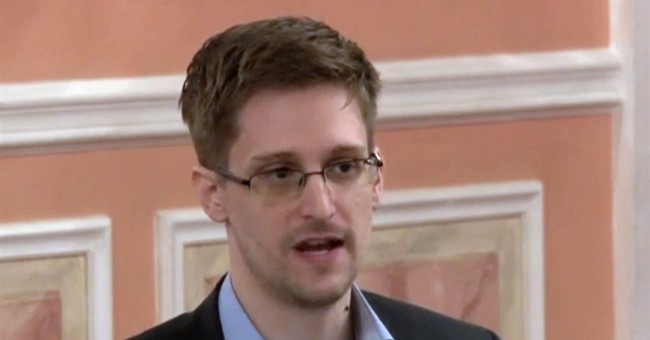 On Friday, January 3, radio talk show host Mike Gallagher charged NSA whistleblower Edward Snowden with being a “traitor” while accusing those of his conservative minded listeners who disagreed with thinking like leftists.

Self-avowed “conservatives,” like Gallagher, are, at best, morally confused. At worst, they’re intellectually dishonest. Either way, whether they realize it or not, they are accomplices to the left’s efforts to “fundamentally transform” Western culture.

Regardless of one’s opinions of Snowden the man, the fact remains that he succeeded in calling the nation’s attention to a massive government surveillance program to which most Americans would have otherwise remained oblivious, a program that enables the government to collect information on citizens while bypassing the Fourth Amendment. That this gargantuan apparatus—the emblem par excellence of just the sort of omnipotent government that our Founding Fathers envisioned with dread, just the sort of liberty-crushing central authority that the Constitution was ratified to preclude—exists, ostensibly, for “our own good,” is neither here nor there.

That it exists is, or at least should be, troubling enough for any lover of liberty.

Even if, per impossible, the NSA never abused its awesome powers, even if it had a perfect track record of thwarting terrorist attacks, that it could deploy its resources to violate the privacy of American citizens is alone sufficient to paralyze the liberty lover with the fear that his government has betrayed the dream and promise of his forefathers.

The true lover of liberty knows that of which the Framers of the Constitution needed no reminding: there is no such thing as liberty.

There are only liberties.

Moreover, these liberties are but the flip side of the duties that our Constitution imposes upon the government—the federal, as opposed to a national, government.

By way of its many “checks and balances,” the Constitution of the United States codifies a complex set of political arrangements that severely limits both the authority and the power of the government. Its Bill of Rights was intended to further immunize the citizen against potential abuses of his government.

Interestingly, it is Gallagher and company, not their conservative rivals, who are guilty of allying with the left.

First of all, there is no getting around the stone-cold fact that the term “Big Government” applies to nothing if it doesn’t apply to the NSA’s surveillance system. In other words, no one can credibly claim to oppose “Big Government” who isn’t profoundly troubled by the existence of the NSA. That Gallagher and his ilk not only support the NSA, but enthusiastically support it, proves that they are just as prone to Big Government as are Barack Obama and his fellow partisans who also defend the NSA.

Second, Gallagher reiterated today that we remain in a war. Note, as long as self-styled “conservatives” insist that we are in a “war” on “terror” or “terrorists,” they would have us all think that we are in a war without end. Such a notion, infinitely more so than any other, invites endless government growth: nothing is more amenable to Big Government than war.

This “War on Terror” that Gallagher and his colleagues unfailingly invoke whenever the government’s endeavors to “keep us safe,” however constitutionally suspect these endeavors may be, are brought into question is music to the ears of Big Government leftists like Obama. Under the pretext of “national security,” Obama, or any other champion of Big Government, can justify, or try to justify, virtually anything. As we’ve seen, this has already happened with the NSA itself.

This should come as no surprise to anyone who already distrusts Big Government. Think about it: with the exception of anarchists, everyone else accepts that among the legitimate functions of government, providing for the national defense ranks at the top of the list. Furthermore, everyone knows that government has a propensity to perpetuate itself. Thus, what better way for office holders at the federal level to strengthen and enlarge the federal government than by having everyone else believe that there is a state of perpetual war?

Neither the conservative movement nor the Republican Party promises to make any gains as long as its representatives fail to recognize two things.

First, Americans long ago grew cold on their “war on terror,” an interminable government exercise in the social engineering of foreign lands that has already come at the cost of far too much blood, treasure, and liberty.

Second, exactly because of the inexhaustible expansion of the scope and power of the national government that this “war” requires, these voices for “conservatism” and the GOP are actually doing much of the left’s work for it as they empower the government further by supplying a catch-all rationale for the project to “fundamentally transform” America.