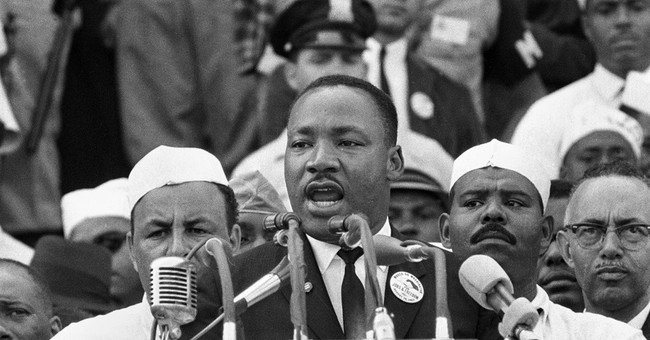 On this 50th anniversary of the “I Have a Dream” speech, even the self-avowed apostles of “individualism,” “liberty,” and “limited government”—i.e. “conservatives”—can’t resist lavishing endless praise upon its author, Martin Luther King, Jr.

As uncomfortable as it makes these declared enemies of Big Government to think it, to say nothing of openly admitting it, the stone-cold truth of the matter is that King was nothing if not a man of the hard left.

Michael Eric Dyson, a King admirer and hard leftist himself, makes this point unmistakably clear in his, I May Not Get There With You: The True Martin Luther King, Jr.

Blasting away at the “the conservative misappropriation” of King, Dyson shows, not that King would have supported much of the left’s agenda, but that he in fact did do so. For starters, King resoundingly endorsed what is today called “affirmative action.” King insisted that “the nation must not only radically readjust its attitude toward the Negro in the compelling present, but must incorporate in its planning some compensatory compensation from the handicaps he inherited from the past.”

Moreover, King envisioned a redistributive scheme that he characterized as “massive.” “I am proposing,” King remarked, “that, just as we granted a GI Bill of Rights to war veterans, America launch a broad-based and gigantic Bill of Rights for the Disadvantaged, our veterans of the long siege of denial.”

Interestingly, King eventually came to think that his earlier belief that American institutions could be “reformed” was a mistake. Rather, because America was “born in genocide,” “racial hatred,” and “racial supremacy,” nothing less than “a reconstruction of the entire society, a revolution of values” was demanded. After all, “a nation that put as many Japanese in a concentration camp as” America did during World War II will think nothing of putting “black people in a concentration camp” as well.

This “revolution of values” that he desired King called “democratic socialism.”

Since the Civil Rights Act of 1964 and the Voting Rights Act of 1965, “the plight of the Negro poor” had actually worsened. What many view as his two signature achievements King viewed as “at best surface changes.” Only a “redistribution of economic power” could rectify the injustices that King believed were rooted in “the system” of “capitalism” itself.

Today, many Americans still resent Jane Fonda for her activism during the Vietnam War. But King was as vocal a critic of America’s presence in Southeast Asia as Fonda ever was. The war was “senseless,” “unjust,” and “racist,” he insisted. Moreover, King, whose voice even at this time was no less influential than that of Fonda’s, described America as “the greatest purveyor of violence in the world today [.]”

There is one final detail concerning this icon that enriches the irony of “Reagan conservatives” doing their best to transform King into a one of their own: King despised Ronald Wilson Reagan.

Rarely did he publicly criticize his opponents—or anyone—by name, but, such was his contempt for Reagan that King made an exception in his case. “When a Hollywood performer,” King stated, “lacking distinction even as an actor, can become a leading war hawk candidate for the presidency only the irrationalities induced by a war psychosis can explain such a melancholy turn of events [.]”

King deserves to be credited for both combating state-ordered segregation as well as his impassioned defense of non-violence. Yet if conservatives and libertarians are to maintain their credibility, they must resist the temptation to turn King into one of their own. He was a man of the hard left who called for the fundamental transformation of the United States long before Barack Obama called for the same.