Jackie Gingrich Cushman
|
Posted: Jan 06, 2022 12:01 AM
Share   Tweet
The opinions expressed by columnists are their own and do not necessarily represent the views of Townhall.com. 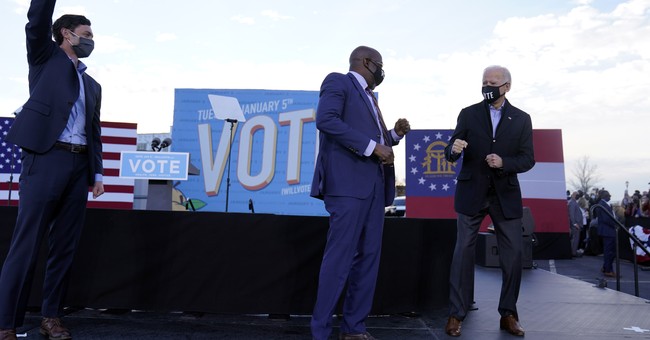 It's been a year since Jon Ossoff and Raphael Warnock won both U.S. Senate seats from Georgia, giving Democrats slight control of the body. A day later, the U.S. Capitol was invaded by people protesting the certification of the presidential election for now-President Joe Biden. It seems like a decade has passed rather than a year, but then again, we are living in COVID time warp where the passage of time seems both fast and slow at the same time.

While many Republicans might believe that the election was stolen, the truth is that Republicans could have and should have won both the presidency and the two U.S. Senate seats in Georgia. If our candidates had run overwhelmingly positive campaigns that had given people reasons to get out and vote for them, we could have won by overwhelmingly large margins that would have negated any potential irregularities. Instead, we railed against our opponents, tried to scare people into voting for us and ended up losing by a small margin.

We focused too much on our opponents and too little on the voters, whose votes we need to win. Unfortunately, I am not sure that we have learned this lesson.

While some Republicans continue to defend the protesters who invaded the Capitol, according to Rasmussen Reports, "50% of likely U.S. voters think the January 6 riot represented a threat to American democracy, while 41% believe it was not." It should be easy to agree that storming a building is not a good idea and should not be condoned. On the other hand, we should also be able to agree that the 2020 elections were unusual, due to the enormous numbers of absentee ballots that were cast. We do agree that it is important that our elections have integrity. According to Rasmussen, "75% of likely U.S. voters believe that requiring photo ID to vote is a reasonable measure to protect the integrity of elections" (1,000 likely voters, Dec. 7-8, 2021, +/- 3 points).

Meanwhile, we are less than a year away from another important election in Georgia, where Republican Gov. Brian Kemp is being challenged in the primary by former U.S. Sen. David Perdue. Perdue lost to Ossoff in last year's Jan. 5 runoff. Perdue announced his candidacy in the coming election by saying, "I'm running for governor to make sure Stacey Abrams is never governor of Georgia. Make no mistake. Abrams will smile, lie and cheat to transform Georgia into her radical vision of a state that would look more like California or New York." Kemp can't win against Abrams, Perdue said.

Former University of Georgia football star Herschel Walker is running in the Republican primary to get the chance to go head-to-head with Sen. Warnock, who beat Sen. Kelly Loeffler last year in the runoff. While his message is more positive, it's full of cliches and platitudes and sugary coating. A pastor at Ebenezer Baptist Church in Atlanta, Warnock can out-platitude Walker without even trying.

Meanwhile, Abrams has announced that she is running again for governor in Georgia. While Republicans continue to demonize her, she ignores them, is positive and focuses on her messages: "Build a stronger Georgia" and we are "one Georgia." Over the past few years, Abrams has built a strong ground organization, and last fall, her political action committee, Fair Fight, donated $1.34 million to a nonprofit to wipe out $212 million of medical debt owed by 108,000 people in Georgia, Arizona, Louisiana, Mississippi and Alabama. Many of them are doubtlessly aware that it was Abrams who helped pull them out of debt; that awareness could influence how they vote in the future.

Maybe a recent example would be helpful. Andre Dickens placed second in the general election but won by an overwhelming margin in the runoff for mayor of Atlanta. This week, he was sworn in. According to Nick Juliano, a Democratic strategist, he "won this race through positivity. He ran a very forward-looking, upbeat, positive campaign about what the future of the city of Atlanta should look like." If only our Republican candidates would take heed and learn from Dickens' win.

Voters need a reason to get into the car and vote for someone, not a reason to vote against someone. It's time for us to look forward to a brighter future, not back.