Jackie Gingrich Cushman
|
Posted: Apr 19, 2018 12:01 AM
Share   Tweet
The opinions expressed by columnists are their own and do not necessarily represent the views of Townhall.com. 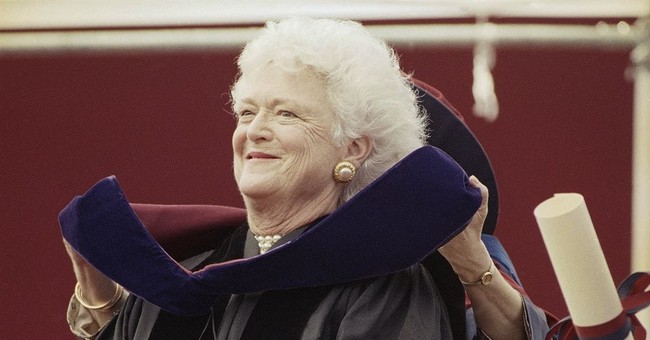 "And may your future be worthy of your dreams," Barbara Bush, then-first lady of the United States, challenged the graduating class of Wellesley College in the spring of 1990. This challenge remains with us today, after her death this week at the age of 92. A matriarch of a political family, she was one of only two women (the other being Abigail Adams) who was both wife and mother of American presidents.

After serving eight years as second lady, while Nancy Reagan served as first lady, Bush moved into the White House in 1989 with her husband, then-President George Herbert Walker Bush. A fierce defender of her husband and their children, she was a relentless advocate for literacy. She was a visible icon with her bright white coiffed hair, double strands of pearls and understated yet tasteful clothes. Her presence was a visual reminder of proper manners and reminded some people of their grandmother.

She will be missed.

After she was invited to give the commencement speech at Wellesley, the New York Times reported, "About 150 of Wellesley's 2,200 students signed a petition then that said Mrs. Bush 'gained recognition through her husband's achievements,' not her own, 'which contradicts what we have been taught over our years at Wellesley.'"

But she appeared anyway, sure of herself as a wife, mother, homemaker and literacy advocate. She was poised, humorous and hopeful.

Her view of diversity was captured in a story she told during her address: "a young pastor, finding himself in charge of some very energetic children, hits upon a game called 'Giants, Wizards and Dwarfs.' 'You have to decide now,' the pastor instructed the children, 'which you are -- a giant, a wizard or a dwarf?' At that, a small girl tugging at his pants leg asked, 'But where do the mermaids stand?'

"The pastor tells her there are no mermaids. 'Oh yes there are,' she said. 'I am a mermaid.'"

The message -- that the little girl did not "give up on either her identity or the game," was to be who you are, even if you do not conform to society's view. Diversity is not only about learning about and respecting differences, and being compassionate; it also allows us to "cherish our own identity, and to accept unconditionally the same in others."

The question for us today is: How do we embrace the seeming paradox of respecting differences while cherishing our own identity when today's embrace of diversity often requires conforming into specific societal views?

Possibly, the challenge is to first truly understand, embracing and accepting who we are.

Noting that here are "three very special choices," Bush challenged the graduates to expand their views beyond academics and career.

"The first is to believe in something larger than yourself ... to get involved in some of the big ideas," she said. Bush's involvement in promoting literacy was based on the belief that "if more people could read, write and comprehend, we would be that much closer to solving so many of the problems that plague our nation and our society."

Second, she challenged the graduates to focus on joy. "(L)ife really must have joy," she said. "It's supposed to be fun!" This focus on joy led her to marry her husband -- because he made her laugh.

"The third choice that must not be missed is to cherish your human connections: your relationships with family and friends," Bush said. "(Y)ou are a human being first, and those human connections -- with spouses, with children, with friends -- are the most important investments you will ever make."

Bush also championed the value of family and the responsibility of parenting: "(I)f you have children ... they must come first.

Finally, she acknowledged that gender roles in society were changing, and rightly so, but that the graduates should define for themselves what it means to succeed. That may not have anything to do with the past view of "who gets married first" or the then-current version of "who becomes a CEO."

The real view of diversity and openness would be for a graduate "to realize her dream ... not society's dreams ... her own personal dream," to not conform to specific societal views but fully embrace and cherish her own identity, possibly as a mermaid.