Our Destiny is in Our Hands

Jackie Gingrich Cushman
|
Posted: Sep 21, 2017 12:01 AM
Share   Tweet
The opinions expressed by columnists are their own and do not necessarily represent the views of Townhall.com. 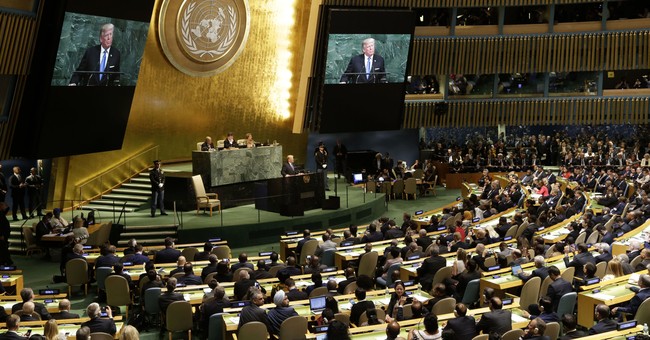 In a remarkable speech marked by fearlessness and clarity, the leader of the free world told other world leaders this week that all of them -- himself included -- need to focus on their own people.

In his first address to the United Nations, President Donald Trump offered a mixture of views that provided both paradox and clarity. He focused on sovereignty but was not isolationist. He was respectful of other forms of government but pushed world leaders to focus more on people than on government.

Trump reaffirmed his belief in the slogan that helped win him the nation's top job. "As president of the United States, I will always put America first, just like you, as the leaders of your countries, will always, and should always, put your countries first," he said. He then acknowledged the cultures and sovereignty of other nations. "We do not expect diverse countries to share the same cultures, traditions or even systems of government," he said.

Trump's speech came during the same week that the United States marks the 230th anniversary of its Constitution. We had declared our independence 11 years earlier, with the self-evident truths "that all men are created equal, that they are endowed by their creator with certain unalienable rights, that among these are life, liberty and the pursuit of happiness." But it was the Constitution that provided the structure, the architecture of our government.

The document begins with the phrase, "We the People of the United States," indicating that the people are in charge (versus a king or monarch). It names the goal, "a more perfect Union," of the United States. Not perfect but more perfect. It also articulates the purpose of the government, to "establish justice, insure domestic tranquility, provide for the common defense, promote the general welfare, and secure the blessings of liberty to ourselves and our posterity."

This framework of understanding that the people give power to the government and the government is responsible to the people was reflected in Trump's words, not only about our country but about other countries. "We do expect all nations to uphold these two core sovereign duties: to respect the interests of their own people and the rights of every other sovereign nation...And strong, sovereign nations allow individuals to flourish in the fullness of the life intended by God."

While Trump recognized the sovereignty of other nations, he also promoted the rights of people before the rights of government. "Our government's first duty is to its people, to our citizens -- to serve their needs, to ensure their safety, to preserve their rights, and to defend their values," he said.

He contrasted the U.S. government's focus on its people with other governments -- by pointing fingers and naming names. "The scourge of our planet today is a small group of rogue regimes," he said. "They respect neither their own citizens nor the sovereign rights of their countries."

Trump cited North Korea (for its "reckless pursuit of nuclear weapons"), Iran ("a murderous regime with destabilizing activities), Cuba, ("corrupt and destabilizing regime"), and Venezuela, (whose "socialist dictatorship of Nicolas Maduro has inflicted terrible pain and suffering on the good people of that country").

He took them to task not just for threatening other countries, but for "the maltreatment of their own people."

Trump provided unflinching clarity regarding North Korea and its leader, Kim Jong-Un. "If it [United States] is forced to defend itself or its allies, we will have no choice but to totally destroy North Korea," he said. "It is time for all nations to work together to isolate the Kim regime until it ceases its hostile behavior."

Trump then challenged his audience of world leaders at the United Nations to confront evil. "If the righteous many do not confront the wicked few, then evil will triumph," he said. "When decent people and nations become bystanders to history, the forces of destruction only gather power and strength."

For those in the United States who view socialism as a potential solution, Trump was clear where this would lead. "From the Soviet Union to Cuba to Venezuela, wherever true socialism or communism has been adopted, it has delivered anguish and devastation and failure. Those who preach the tenets of these discredited ideologies only contribute to the continued suffering of the people who live under these cruel systems."

At the core of Trump's speech was this message: the United States and other countries have work to do within their own borders. If "we do not invest ourselves, our hearts, and our minds in our nations, if we will not build strong families, safe communities, and healthy societies for ourselves, no one can do it for us." Trump understands that, while we may be a more perfect union, we have not yet achieved perfection.

Trump reminds us that it will be up to the American people, to determine our own destiny.