Jackie Gingrich Cushman
|
Posted: Oct 06, 2016 12:01 AM
Share   Tweet
The opinions expressed by columnists are their own and do not necessarily represent the views of Townhall.com. 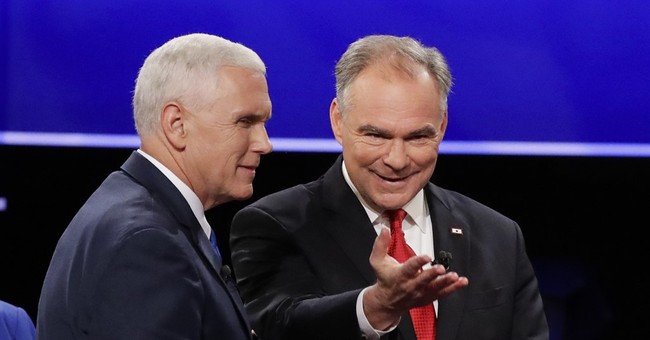 I hope Donald Trump was watching his running mate during the vice presidential debate this week. If so, I expect that he learned some valuable lessons.

Kaine and Pence sat a table with the moderator, CBS' Elaine Quijano, who was rarely visible to viewers at home. Instead, TV screens were filled for most of the evening with split-screen pictures showing the two candidates: Kaine appeared aggressive, angry and aggravated; Pence was, well, presidential.

During the 90-minute debate, Pence was interrupted more than 70 times, mostly by Kaine, but retained his composure and smiled. The debate outcome: a huge win for the Trump/Pence ticket, a distraction for the Clinton/Kaine ticket (from which they will move on rapidly), and an incredible learning experience for Quijano, who lost control early on and rarely regained it.

Historically, the vice presidential debates have not made a big difference in the presidential race, but they have shored up uncertain voters' confidence about those on top of the ticket.

Quijano started by laying a foundation that went back a few years, citing a quotation from the Democratic participant in the 1988 veep debate against Dan Quayle. "Lloyd Bentsen said the vice presidential debate was not about the qualifications for the vice presidency, but about how, if tragedy should occur, the vice president has to step in without any margin for error, without time for preparation, to take over the responsibility for the biggest job in the world," Quijano said. She then asked how each man felt he measured up for the biggest job in the world.

In his answer, Kaine recalled Hillary Clinton asking him to join the ticket. "And she said to me, 'You've been missionary and a civil rights lawyer. You've been a city councilman and mayor. You've been a lieutenant governor and governor and now a U.S. senator. I think you will help me figure out how to govern this nation so that we always keep in mind that the success of the administration is the difference we make in people's lives.' And that's what I bring to the ticket, that experience having served at all levels of government."

Pence responded similarly. "I'm a small-town boy from a place not too different from Farmville... I would hope that if -- if the responsibility ever fell to me in this role, that I would meet it with the way that I'm going to meet the responsibility should I be elected vice president of the United States. And that's to bring a lifetime of experience, a lifetime growing up in a small town, a lifetime where I've served in the Congress of the United States, where -- where I've led a state that works in the great state of Indiana, and whatever other responsibilities might follow from this, I -- I would hope and, frankly, I would pray to be able to meet that moment with that -- that lifetime of experience."

Additionally, Pence focused on his running mate's outside experience. "Donald Trump has built a business through hard times and through good times. He's brought an extraordinary business acumen. He's employed tens of thousands of people in this country."

Think of them as the outsider/conservative ticket.

Pence's performance at the vice presidential debate provides Trump with two opportunities for the next debate, to be held this Sunday against Clinton.

The first is to answer questions about potentially controversial matters such as his tax returns. The second opportunity is for him to ask questions unasked by the moderator of Clinton during the debate regarding her private email server, the Clinton Foundation, and her handling of Benghazi.

Regarding his taxes, a possible response is for him to simply say to voters, "Just like you, I follow the tax laws of our nation and pay taxes as they state. I know how crazy our current tax system is -- it must be simplified and restructured. Every dollar the government spends comes from taxpayers, either collected from you today - or in some point in the future due to government borrowing. I want to make sure that the government spends every one of your dollars wisely and not wastefully."

This Sunday, we will have the opportunity to watch Clinton and Trump debate again. Let's hope that Trump was watching Pence and taking notes -- especially about his running mate's temperament -- that he can put into play.

Communicated properly - the voters' choice will be clear.