Jackie Gingrich Cushman
|
Posted: Feb 25, 2016 12:01 AM
Share   Tweet
The opinions expressed by columnists are their own and do not necessarily represent the views of Townhall.com. 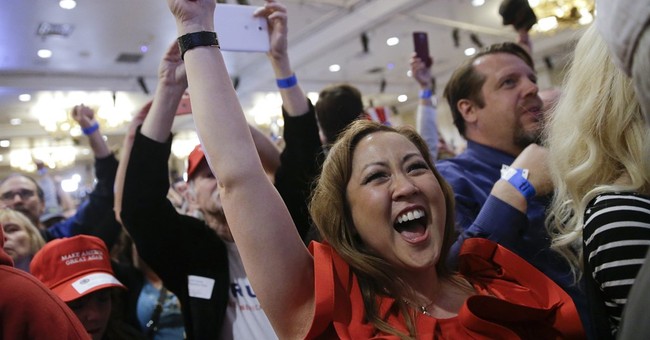 It's been a wild primary season. No one would have guessed a year ago that Senator Bernie Sanders of Vermont would be giving presumed Democratic Nominee Hillary Clinton a run for her money, or that businessman and entertainer/reality television star Donald Trump would be leading the Republican nomination process.

But here we are.

So far, Trump has won three of the first four caucuses or primaries for the Republican nomination for presidency: New Hampshire, South Carolina and Nevada. Additionally, during these last few weeks, due to their poor election results, the field of Republican candidates has been whittled down. Chris Christie, Rand Paul, Carly Fiorina, Jeb Bush, Rick Santorum and Mike Huckabee have all bowed out of the race.

Of the 16 candidates originally covered by polling data on the Real Clear Politics website, only 5 remain in the race: Trump, Marco Rubio, Ted Cruz, John Kasich and Ben Carson. Looking at recent results, the Republican nomination is really among three candidates: Trump, Rubio and Cruz.

While Trump has been on top, until March 15, all delegates are awarded proportionally (SC was the lone exception, with all delegates going to Trump). With 1,237 delegates needed to win the convention, Trump is far ahead at 81, with both Cruz and Rubio at 17.

Trump declared victory in Nevada with 46 percent of the votes. Rubio came in second with 24 percent, and Cruz was third with 21 percent. More interesting than the voting was the election night activity. Trump celebrated in Las Vegas, speaking to a crowd of supporters; Rubio was already in Michigan, and Cruz was focusing on the next contest, where his home state Texas would be in play.

This next week marks the first seismic shift in the nomination process. The race moves from a state-by-state contest to Super Tuesday, when 13 states will hold primaries. The week between the Nevada Caucuses and Super Tuesday will require the campaigns to determine how to allocate money, staff, volunteers and time among the various states.

The states that will vote next week include Alabama, Alaska, Arkansas, Colorado, Georgia, Massachusetts, Minnesota, Oklahoma, Tennessee, Texas, Vermont, Virginia and Wyoming. Combined, these states represent 595 delegates, who will be split proportionally based on votes. Texas holds the largest number of delegates at 155, with Georgia coming in second at 76.

For Cruz, Texas is a must-win state, so expect him to spend a lot of time, effort and money there. Cruz overtook Trump in the Texas polls in late January, and might be able to win his home state, but with proportional allocation, a slight win is not that helpful -- it just heads off the embarrassment that Al Gore endured by losing his home state.

After Super Tuesday comes Kansas, Kentucky, Louisiana, Maine and Puerto Rico -- on March 5 and 6. On March 8, primaries will be held in Hawaii, Idaho, Michigan and Mississippi. On March 12, Guam and the District of Columbia vote.

The Ides of March mark another huge change in the process when the contests become winner-take-all. They include Florida (99 delegates), Illinois, Missouri, North Carolina, Northern Marianas, and Ohio (66 delegates) for a combined 367 delegates. The question is: can Cruz or Rubio last that long?

There is no doubt that the Rubio campaign is attempting to design a future that includes holding on until the Florida Primary, but with Trump having been ahead in the Florida polls since August, it might make sense for Rubio to fold beforehand.

You might be among those scratching your head, wondering how we ended up here, with Trump in first and with no clear vision to stop the Trump tornado. A Washington Post article written by James Hohmann last August titled, "Trump: Maybe America should try making a jerk president," provides a view into the draw of a Trump presidency.

When talking about researching the cross tabs of a poll, the article notes that Trump said, "'The only thing I did badly on was: Is he a nice person? I was last in terms of niceness,' he said.

"Campaigning deep in the Bible Belt, he once again spun this as not a liability -- but an asset.

"'I think I'm the nicest of all,' he deadpanned. 'I just don't want to be taken advantage of!'

"Continuing his main line of attack on Jeb Bush, Trump predicted that the choice Republicans face in picking a nominee will come down to niceness vs. competency.

Maybe Trump's right -- after eight years of niceness, maybe we would rather choose competency over niceness.