Jackie Gingrich Cushman
|
Posted: Feb 18, 2016 12:01 AM
Share   Tweet
The opinions expressed by columnists are their own and do not necessarily represent the views of Townhall.com. 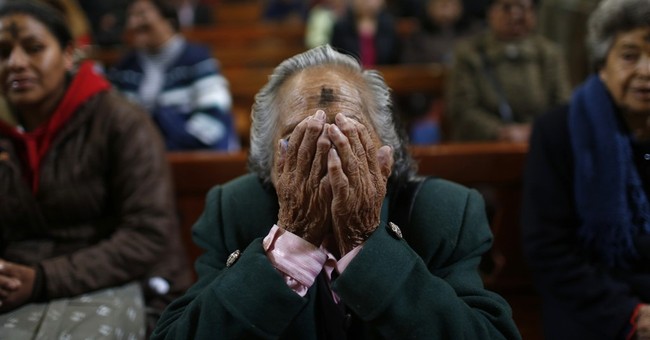 Lent began last week on February 10. In the Christian tradition, the Lenten period is a time of fasting and prayer, preparation and reflection in anticipation of Easter, which commemorates the death and resurrection of Jesus.

Historically, Lent has been a time to provide instruction to new converts and young Christians as a way to strengthen their faith, as well as a period for believers to spend in reflection in order to strengthen their faith. Lent allows Christian believers to focus on God rather than the world. Prayer and fasting are a way to change the patterns of their everyday lives to allow time for introspection and contemplation.

Lent -- which is derived from the Old English word lencten, or spring -- begins just as winter begins to be oppressive and transitions us into the next season. This year, the first day of spring is March 20, just a few days before the celebration of Easter.

While some people say politics and religion should never be mixed, this year's calendar has made that inevitable: Mardi Gras, the last day of celebration before Lent, fell on the same day as the New Hampshire Primary.

Many of the candidates' primary night events reflected an atmosphere of celebration. However, as with Mardi Gras, the candidates' celebrations lasted only a night. Once the primary was over, the campaigns began to focus on solidifying their support and winning in South Carolina and then on Super Tuesday.

The final stage of primary season is a bit like Lent, a time for each political party to focus internally on its core principles in anticipation of the inevitable arrival of spring and, soon after, the general election. While the primary process is the first hurdle in the race to the national election, it is the general election that ultimately determines who will become our country's next president.

Lent reminds each of us that we are to be humble. That, instead of focusing on ourselves, we should focus on God and on how we can serve others.

This humbling is in opposition to the state of hubris, exaggerated pride or self-confidence, which is all too often prevalent in our society.

Hubris has been evident throughout this election cycle, among pundits who proved to be consistently incorrect in their predictions regarding who was going to win which primary or caucus, and among candidates who made grandiose predictions about winning that did not come true.

Lent provides us with space to reflect and restore ourselves and our connection to God. President George Washington understood the importance of personal values as the underpinning of a great nation. In his farewell address, written after serving 8 years as our first president, Washington wrote, "Of all the dispositions and habits, which lead to political prosperity, religion and morality are indispensible supports."

President Abraham Lincoln, too, understood that he was but an instrument in the hand of God, and that the will of God would prevail. Almost halfway through his first term, he wrote a private note, "The will of God prevails. In great contests each party claims to act in accordance with the will of God. Both may be, and one must be, wrong. God cannot be for and against the same thing at the same time. In the present civil war, it is quite possible that God's purpose is something different from the purpose of either party - and yet the human instrumentalities, working just as they do, are for the best adaptation to effect his purpose."

In the end, the American people will decide, through their action or inaction, who will win the primary for each party, and eventually, who will lead our nation.

Perhaps the presidential candidates will be reminded of this call to humility this Lenten season, remembering that the campaign -- in the end -- is not about them, their campaign staffs or their advisors, but about the American people.

Let us also be humbled and reminded of our responsibility as citizens in our great nation. A democracy is only as effective as its citizens are active. Our job is to think through the issues, relying not on pundits statements and campaign slogans, but on our understanding of each candidate's platform and policies. Let us also remember, as unusual as this election year has been, that Lincoln reminds us that "it is quite possible that God's purpose is something different from the purpose of either party -- and yet the human instrumentalities, working just as they do, are for the best adaptation to effect his purpose."