The Value of Work 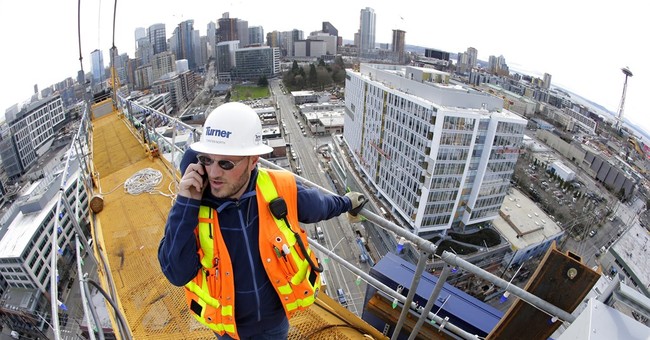 "Hide not your talents, they for use were made, what's a sundial in the shade?" -- Benjamin Franklin

Everyone has different talents and interests given to them by God. We live life to the fullest when we can put our talents and experience to use to benefit not only ourselves, but others as well. We are created not to simply sit on the beach and drink pina coladas (as much fun as that might be), but to contribute to the world in which we live. At the end of the day, there is value in having worked and made a difference.

When looking at the United States economy, we can see that the economic engine is driven by people who work and get paid for their work, and by people investing their capital into enterprises. This in turn allows them to use their wages and capital payments to purchase items needed: groceries, gas, clothing, housing, etc. However, workers can't work if they don't have jobs, which means that companies have to hire or entrepreneurs have to start companies that create jobs.

Investors won't invest money when regulations are onerous, taxes are high or the environment is uncertain. When there are numerous rules and regulations, when companies get taxed for adding workers, when the government creates barriers to business, fewer jobs are created.

Economists define the potential civilian workforce as all people ages 16 and older who are able to work. The labor force participation rate is the percent of the non-institutionalized civilian workforce who are either working or looking for a job. It does not include those who are discouraged and no longer looking, nor does it include those not interested in working.

With approximately 250 million people in our civilian labor force, an additional 3.1 percent of the population working would equate to 7.8 million additional workers. Based on the average weekly salary of $860, if these 7.8 million workers were earning an average salary, it would increase GDP by $348 billion dollars or 2 percent.

However, for these people to be working, they would not only have to want to work, but there would have to be available jobs for them -- otherwise the unemployment rate would simply increase. If the labor participation rate was 65.7 million and the number of employed persons remained the same, unemployment would be 9.8 percent versus the 5.3 percent reported this past month.

Part of the reason that the unemployment rate has fallen in the past six years is that the percent of people participating in the labor force has declined. This is not the way to reduce unemployment. The correct way to decrease unemployment is to increase jobs.

If we could increase the labor participation rate and increase jobs, more people would be working. With more Americans working, there would be less need for government assistance (therefore less government spending), and more tax revenue coming in (therefore more government revenue), both of which would assist in balancing our federal budget.

The best way to balance our federal budget would be to get more Americans working and to get our economy moving. While the government cannot create jobs, it can get in the way of job creators. How does that happen? With burdensome regulations making it hard to do business, high taxes taking away the incentive to create companies and an unstable business climate due to changing tax codes and regulations.

Sparking job growth simply requires the opposite environment: fewer regulations, lower taxes and a stable environment. Can it be done? Absolutely. Under President Reagan's leadership, our economy created almost 20 million new jobs. For this to happen again, we need to understand that business in and of itself is not bad, that it is simply a tool to be used to create value for consumers and jobs for people who want to work. But that tool is an important one -- it's the engine that makes our democracy work. America works best when Americans are working.