Isabelle Morales
|
Posted: Feb 22, 2021 12:01 AM
Share   Tweet
The opinions expressed by columnists are their own and do not necessarily represent the views of Townhall.com. 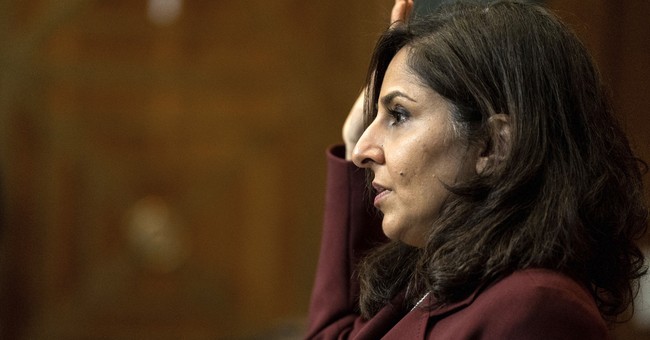 During his campaign, Joe Biden campaigned on “unity” and moderation. Weeks into his presidency, Biden has proven this is not the case with a flurry of job killing regulations and a $1.9 trillion partisan spending plan.

As if this were not bad enough, Neera Tanden, President Biden’s pick to lead the Office of Management and Budget (OMB), supports countless tax increases on American middle-class families including a soda tax, a carbon tax, a full repeal of the Tax Cuts and Jobs Act, and increased Obamacare taxes.

Each of these taxes would violate Biden's pledge not to raise a single penny of taxes on anyone making less than $400,000 a year.

As OMB Director, Tanden would spearhead the president’s budget proposals and have significant influence on tax, spending, and regulatory proposals.

Tanden is a vocal opponent of the Tax Cuts and Jobs Act. In one statement, she called the TCJA a "scam” and “the most immoral, venal pieces of legislation I have seen in my two decades working in policy and politics."

Repealing the tax cuts would raise taxes on middle class families. A family of four earning median income would see a $2,000 tax increase each year, the child tax credit would be cut in half, and millions of low and middle-income households would be stuck paying the Obamacare individual mandate tax of $695 to $2,085.

The corporate tax rate would be raised from 21 percent to 28 percent, which will harm jobs, wages, and the economy. It will also cause utility bills to go up in all 50 states, as most utilities were required by law to pass on tax savings to customers.

Tanden also supports a national soda tax. She has endorsed the “Medicare for America Act,” legislation that imposed a one cent tax per 4.2 grams of caloric sweetener in sugary drinks.

A tax on sugary drinks would also be extremely regressive and disproportionately harm low-income Americans. In fact, according to a 2018 report from the Tax Foundation, 47 percent of the tax collections from a sugary drink excise tax would come from households with incomes under $50,000.

Soda taxes are so radical, even Bernie Sanders opposes them. During his 2016 presidential bid Bernie Sanders slammed Hillary Clinton’s endorsement of a soda tax. Sanders said, “The mechanism here is fairly regressive. And that is, it will be increasing taxes on low income and working people.”

Tanden has also voiced support for a carbon tax. In an interview she stated, "We...believe that we have to have some form of tax on carbon." A carbon tax would harm low-income households and increase the cost of electricity and household goods.

In 2016, Hillary Clinton decided to oppose a carbon tax after she learned the following from an internal Clinton report prepared by policy staff: a carbon tax would devastate low-income households, would cause gas prices to increase 40 cents a gallon and residential electricity prices to increase 12% to 21%, would cause household energy bills to go up significantly, and would increase the cost of household goods and services.

The 3.8 percent NIIT falls on many small businesses that file through the individual code and would be on top of the 39.6 percent federal rate (assuming repeal of the TCJA). This could see small businesses paying a federal rate of 46.5 percent, and rates approaching 60 percent after state taxes. Similarly, the 4 percent Medicare Payroll tax would be levied on individuals in addition to the 39.6 percent rate.

President Biden has repeatedly vowed to strengthen and expand Obamacare, and this may lead to significant tax hikes, including the tax increases supported by Tanden.

Given the influential role Tanden is taking in the Biden administration, her support for these steep tax hikes is most concerning. It appears there is no tax hike Tanden would oppose. Each and every one of these tax hikes would be a blatant violation of Joe Biden's pledge not to raise a single penny of taxes on anyone earning less than $400,000 a year and many would disproportionately impact low-and middle-income Americans. Tanden’s nomination clearly shows Joe Biden’s call to unity was simple campaign rhetoric.