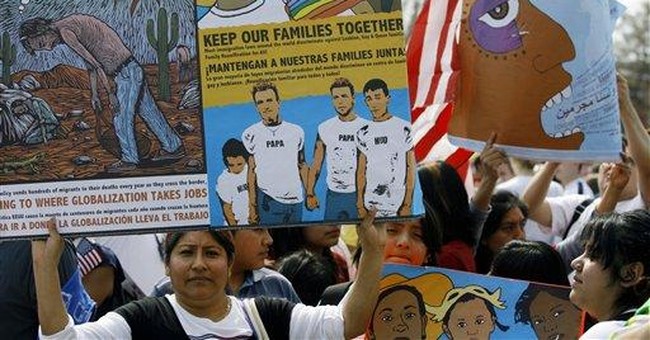 As a result of a deal cut by President Obama to secure the votes of the Congressional Hispanic Caucus for his health care legislation, amnesty for illegal aliens is back on the agenda for 2010. There is no actual legislative vehicle for amnesty just yet, but Senators Charles Schumer (D-N.Y.) and Lindsey Graham (R-S.C.) have rolled out an outline for what they are calling “comprehensive immigration reform.”

There will be ample opportunity to debate the merits of the bill when it is finalized. But aside from the question of whether granting amnesty to millions of people who broke the law is justified, there are even more practical issues that supporters of such a plan need to address.

Let’s start with the issue posed by the Department of Homeland Security Assistant Inspector General Frank Deffer, whose agency would be charged with carrying out an illegal alien amnesty. Testifying before the House Judiciary Committee on March 23, Deffer stated, “Adding 12 million more people to the system would be the mother of all backlogs. Clearly to us the systems could not handle it now.” The mother of all backlogs that Deffer warns about would come on top of the already formidable backlog of millions of people who are waiting their turn to come here legally.

But that’s just one question. Reading through the Schumer-Graham outline, other serious questions seem to jump off the page:

How would fraud be prevented? Sen. Schumer admits that there was widespread fraud during the much smaller 1986 amnesty he helped broker as a member of the House. Faced with the “mother of all backlogs,” and under extreme pressure to process applications, how would DHS prevent even more massive fraud this time around?

Collect back taxes. On what? Never mind that they should have been paying taxes all along, how do you determine the tax liabilities of people who have been working off-the-books, or using a variety of fake or stolen Social Security numbers? Will the IRS simply take their word (and can the rest of us qualify for the same “punishment”)? Would they be eligible to collect refunds and the Earned Income Tax Credit (in which case we might end up owing them money)?

How many relatives? Any amnesty plan would immediately include spouses and minor children who may still be living outside the U.S. How many new (most non-English-speaking) kids should school administrators in Sen. Schumer’s hometown of New York City and around the country plan for over the next five or ten years? And since nearly every city and state is scrounging for every nickel they can find, who is going to pay for it? What about all of the other social and human services that state and local governments would be obligated to provide?

How would a secure ID system be implemented? To prevent future mass illegal immigration, the Schumer-Graham plan calls for requiring that biometric identifiers be added to the Social Security card. Leaving aside the inevitable legal challenges to such a plan, what is the likelihood that Congress would ever implement it? Five years after passage of the REAL ID Act – carrying out the recommendations of the 9/11 Commission – Congress and many state governments are still dragging their heels, and there are serious efforts to scrap it entirely.

These are just a few of the many, many practical questions that need to be asked and answered. Before we even get around to debating the ethics of amnesty for illegal aliens, proponents of amnesty have an obligation to present the American people with a workable plan for doing and paying for what they propose.