Ilana Mercer
|
Posted: Aug 13, 2021 12:01 AM
Share   Tweet
The opinions expressed by columnists are their own and do not necessarily represent the views of Townhall.com. 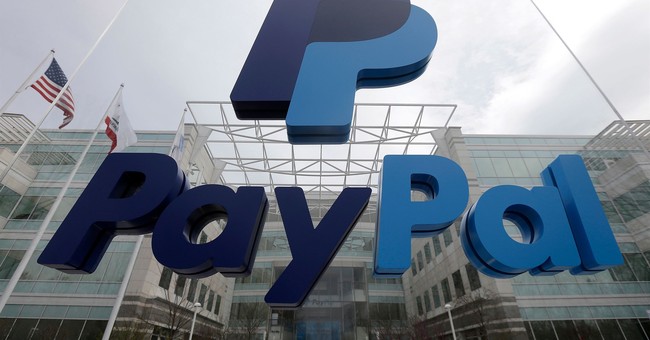 PAYPAL HOLDINGS, Inc, is an indispensable, American, global corporation, without whose services, financially transacting online is difficult. The company is worth $16.929 billion.

The worthless Anti-Defamation League (ADL) is a meddlesome shakedown operation, in the mold of the Southern Poverty Law Center, that has taken it upon itself to decide who lives and who dies socially and financially. People like Pat Buchanan and Tucker Carlson the ADL deems to be mired in white supremacism. What next?

The ADL and PayPal have conspired to ferret out “bigotry and extremism” from the financial industry, by which they mean ban thought crimes.

"Racism—systemic or other—remains nothing but thought crime: impolite and impolitic thoughts, spoken, written or preached. Thought crimes are nobody’s business in free societies."

In response to this particular collusion against thought crimes, Fox News personality Tucker Carlson has vowed to stay chipper. This is not sufficient a solution from so powerful a persona as Mr. Carlson.

As one of the few public intellectual to grasp the gravity of social and financial excommunication by Deep Tech (to denote Big Tech’s enmeshment with The State), and for proposing a way to prohibit wicked social and financial ouster of innocents—Justice Thomas is my hero.

To blabber on about simply finding alternative outlets to Amazon, Facebook, Twitter, Google, Apple, PayPal and other banking facilities is asinine verging on the criminal. Coming from political representatives, such advice ought to guarantee loss of face, even political expulsion.

The ordinary guy or girl (check) is told to go up against economic and political entities whose revenues exceed the GDP of quite a number of G20 nations combined.

"It changes nothing that these platforms are not the sole means for distributing speech or information,” inveighs Justice Thomas:

“A person could always choose to avoid the toll bridge or train and instead swim the Charles River or hike the Oregon Trail. But in assessing whether a company exercises substantial market power, what matters is whether the alternatives are comparable. For many of today's digital platforms, nothing is."

I’d go further. It would hardly be hyperbole, in driving home Justice Thomas’s ingenious point, to put it thus:

With respect to financial de-platforming, barring someone from PayPal is like prohibiting a passenger from crossing the English Channel by high-speed train, via ferry and by means of 90 percent of airplanes.

“Sure, some options remain for you to explore, you hapless loser. Go to it!”

Thomas has argued in favor of the "two legal doctrines" that "limit the right of a private company to exclude":

The first doctrine, he explained, involves "common carriers," such as railroads and telegraphs, which have historically been required "to serve all comers." The second involves "places of public accommodation" or amusement, such as inns, restaurants, and theaters, which have generally been forbidden from denying service to certain categories of people. "The similarities between some digital platforms and common carriers or places of accommodation," Thomas wrote, "may give legislators strong arguments for similarly regulating digital platforms." (Via Reason.)

Republicans, especially the tenured motormouths on TV, have refused so much as to grapple with Justice Thomas’ outstanding assessment of Big Tech and his attendant legal recommendation.

Ilana Mercer has been writing a weekly, paleolibertarian think piece since 1999. She’s the author of Into the Cannibal’s Pot: Lessons for America From Post-Apartheid South Africa (2011) & The Trump Revolution: The Donald’s Creative Destruction Deconstructed” (June, 2016). She’s on Twitter, Gab, YouTube & LinkedIn; banned by Facebook, and has a new Podcast.