Why The H-1B Visa Racket Should Be Abolished, Not Reformed

Ilana Mercer
|
Posted: Apr 22, 2017 12:01 AM
Share   Tweet
The opinions expressed by columnists are their own and do not necessarily represent the views of Townhall.com. 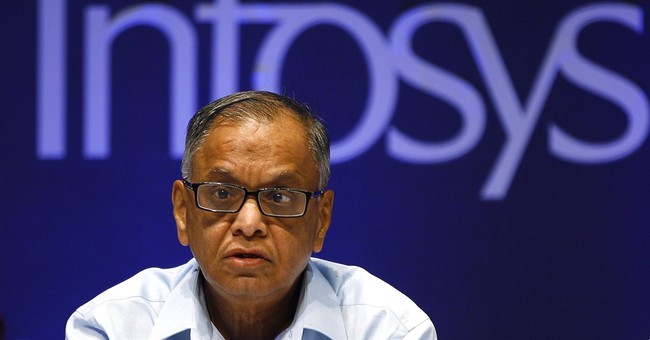 Billionaire businessman Marc Cuban insists that the H-1B visa racket is a feature of the vaunted American free market. This is nonsense on stilts. It can't go unchallenged.

Another billionaire, our president, has ordered that the H-1B program be reformed. This, too, is disappointing. You'll see why.

First, let's correct Mr. Cuban: America has not a free economy, but a mixed-economy. State and markets are intertwined. Trade, including trade in labor, is not free; it's regulated to the hilt. If anything, the labyrinth of work visas is an example of a fascistic government-business cartel in operation.

The H-1B permit, in particular, is part of that state-sponsored visa system. The primary H-1B hogs—Infosys (and another eight, sister Indian firms), Microsoft, and Intel—import labor with what are grants of government privilege. Duly, the corporations that hog H-1Bs act like incorrigibly corrupt rent seekers. Not only do they get to replace the American worker, but they get to do so at his expense.

Globally, a series of sordid liaisons ensures that American workers are left high and dry. Through the programs of the International Trade Administration, the Export-Import Bank, the Overseas Private Investment Corporation, the International Monetary Fund, and other oink-operations, the taxpaying American worker is forced to subsidize and underwrite the investment risks of the very corporations that have given him the boot.

Domestically, the fascistic partnership with the State amounts to a subsidy to business at the expense of the taxpayer. See, corporations in our democratic welfare state externalize their employment costs onto the taxpayers.

So while public property is property funded by taxpayers through expropriated taxes; belongs to taxpayers; is to be managed for their benefit—at least one million additional immigrants a year, including recipients of the H-1B visa, are allowed the free use of taxpayer-supported infrastructure and amenities. Every new arrival avails himself of public works such as roads, hospitals, parks, libraries, schools, and welfare.

Does this epitomize the classical liberal idea of laissez faire?

Moreover, chain migration or family unification means every H-1B visa recruit is a ticket for an entire tribe. The initial entrant—the meal ticket—will pay his way. The honor system not being an especially strong value in the Third World, the rest of the clan will be America's problem. More often than not, chain-migration entrants become wards of the American taxpayer.

Spreading like gravy over a tablecloth, this rapid, inorganic population growth is detrimental to all ecosystems: natural, social and political.

Take Seattle and its surrounding counties. Between April 2015 and 2016, the area was inundated with “86,320 new residents, marking it the region’s biggest population gains this century. Fueled in large part by the technology industry, an average of 236 people is moving to the Seattle area each day,” reported Geekwire.com. (Reporters for our local fish-wrapper—in my case, parrot-cage liner—have discharged their journalistic duties by inviting readers to "share" their traffic-jam stories.)

Never as dumb as the local reporters, the likes of Bill Gates, Steve Ballmer, Mark Zuckerberg and Marc Cuban are certainly as detached.

Barricaded in their obscenely lavish compounds—from the comfort of their monster mansions—these social engineers don't experience the "environmental impacts of rapid urban expansion”; the destruction of verdant open spaces and farmland; the decrease in the quality of the water we drink and air we breathe, the increase in traffic and traffic accidents, air pollution, the cellblock-like housing erected to accommodate their imported I.T. workers and extended families, the delicate bouquet of amped up waste management and associated seepages.

For locals, this lamentable state means an inability to afford homes in a market in which property prices have been artificially inflated. Young couples lineup to view tiny apartments. They dream of that picket fence no more. (And our "stupid leaders," to quote the president before he joined leadership, wonder why birthrates are so low!)

In a true free market, absent the protectionist state, corporate employers would be accountable to the community, and would be wary of the strife and lowered productivity brought about by a multiethnic and multi-linguistic workforce. All the more so when a foreign workforce moves into residential areas almost overnight as has happened in Seattle and its surrounds.

Alas, since the high-tech traitors can externalize their employment costs on to the community; because corporations are subsidized at every turn by their victims—they need not bring in the best.

Cuban thinks they do. High tech needs to be able to "search the world for the best applicants," he burbled to Fox News host Tucker Carlson.

Why doesn't the president know that the H-1B visa category is not a special visa for highly skilled individuals, but goes mostly to average workers? "Indian business-process outsourcing companies, which predominantly provide technology support to corporate back offices," by the Economist's accounting.

Overall, the work done by the H1-B intake does not require independent judgment, critical reasoning or higher-order thinking. "Average workers; ordinary talent doing ordinary work," attest the experts who've been studying this intake for years. The master's degree is the exception within the H1-B visa category.

More significant: THERE IS a visa category that is reserved exclusively for individuals with extraordinary abilities and achievement. I know, because the principal sponsor in our family received this visa. I first wrote about the visa that doesn't displace ordinary Americans in ... 2008:

"Extraordinary ability in the fields of science, education, business or athletics," states the Department of Homeland Security, "means a level of expertise indicating that the person is one of the small percentage who has risen to the very top of the field of endeavor."

Most significant: There is no cap on the number of O-1 visa entrants allowed. Access to this limited pool of talent is unlimited.

My point vis-à-vis the O-1 visa is this: The H-1B hogs are forever claiming that they are desperate for talent. In reality, they have unlimited access to individuals with unique abilities through the open-ended O-1 visa program.

There is no limit to the number of geniuses American companies can import.

Theoretically, the H-1B program could be completely abolished and all needed Einsteins imported through the O-1 program. (Why, even future first ladies would stand a chance under the business category of the O-1A visa, as a wealth-generating supermodel could certainly qualify.)

Now you understand my disappointment. In his April 18 Executive Order, President Trump promised to merely reform a program that needs abolishing. That is, if "Hire American" means anything to anybody anymore.