Ian Haworth
|
Posted: May 10, 2020 12:01 AM
Share   Tweet
The opinions expressed by columnists are their own and do not necessarily represent the views of Townhall.com. 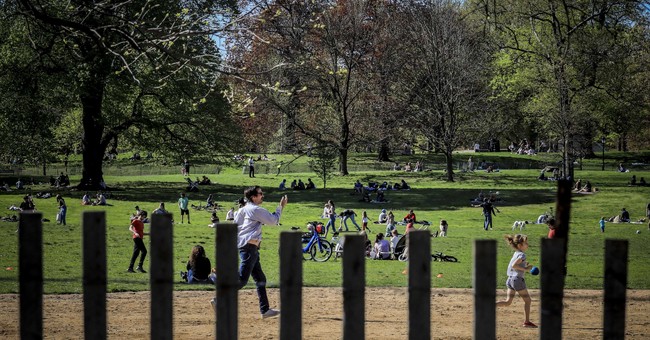 As the coronavirus pandemic has spread across the globe, we have been suffering through a factual drought. Unprecedented events like these force us into uncharted territory, tearing us away from the comfort of instantaneously accessible information. Fueled by the refusal of many in the political class to admit ignorance, we clamor for answers. How is the virus transmitted? What are the symptoms? Who is to blame? In our quest for knowledge, when the answer “I don’t know” is never welcome, a dangerous entity rushes to fill the void - conspiratorial misinformation.

The so-called “Plandemic” video is a perfect example of the dangers of combining a widespread yearning for information with a widespread lack of objective critical thinking. The video presents discredited research scientist Judy Mikovits as its authority figure, and includes claims that “the virus must have been released from a laboratory environment and could not possibly be naturally-occurring; that using masks and gloves actually makes people more sick; and that closing beaches is "insanity" because of "healing microbes" in the water.” The video was initially shared by “anti-vaccination disinformation peddlers,” but its viewership has expanded dramatically in recent days. Despite efforts by social media giants to curb its spread, the “documentary” continues to receive millions of views as new links and recordings are uploaded.

The important issue here is not whether or not companies like YouTube should have the ability to delete content. Setting that debate aside, and assuming they will act, the question now becomes when they should act. In the case of “Plandemic,” the content in question has already spread, reaching a critical mass of conspiracy theorists who are driving its continued “virality.” In addition, the very attempt to quell the growth of “Plandemic” has the potential to add further credence amongst those who already distrust “Big Tech,” forming a “perfect storm” of multiple conspiracy theories. For many, the very attempt to remove content is evidence in itself of malicious intent, providing another layer between the conspiracy theory and the evidence debunking it.

Given that the misinformation horse has already bolted, it seems that the ability to retrospectively regain control of “truth” has been lost. How can we ever fight back against conspiracy theories when they are already so deeply entrenched?

Despite being a well produced and seemingly professional pseudo-documentary, there is no substantive difference between the underlying strategy of “Plandemic” and the countless conspiracy theories many of us have seen and heard before. Each one of them follow the same pattern - making a claim based upon undeserved and unsupported authority while manipulating the emotions of the target audience to bypass the need for scientific evidence.

The late removal of “Plandemic” from social media sites is unlikely to have the desired effect for the same reason why other conspiracy theories survive despite insurmountable evidence to the contrary. Those who believe in their conspiracy theory of choice are driven by a desire to feel uniquely enlightened by “the truth,” which requires an unshakeable insistence on allowing confirmation bias to enable the rejection of even the most objective and unquestionable counter-evidence in favor of protecting one’s viewpoint. With that in mind, the unfortunate fact is that there is little we can do in the short-term to fight such conspiracy theories. No single article, medical study, or meme exists which can reverse the foundational illogical reasoning which drives people to “know” that vaccines cause autism, that Jews control the world, or that 9/11 was an inside job. To truly believe in such conspiracy theories is to reject logic and reason, for which the only cure is logic and reason, leaving us with a paradoxical equation which is impossible to solve.

Instead, we must focus on the skills required to prevent the initial spread of conspiracy theories in order to develop a long-term strategy to defend against them. The foundation of such a strategy will be to empower younger generations with an ideological toolbox which will enable them to determine the validity of claims based upon reliable evidence. The goal must be to reverse the foundational arguments of conspiracy theorists from the illogical to the logical.

Ultimately, we must reforge the algorithm we use to construct our viewpoints. Instead of jumping through increasingly absurd hoops to justify the conclusions we wish to protect, we should feel comfortable to ask questions and demand evidence before finally reaching a sound conclusion.

Many conspiracy theorists view reality by separating people into two categories - the “enlightened” knowers of “the truth,” and the mindless sheep. Instead, we should reject this false binary and choose to exist within a third category which instead values rationality, logic, and objective evidence in the pursuit of truth. In this environment, conspiracy theories will be starved of the oxygen they need to survive.