Colin 'Kunta Kinte' Kaepernick Is Not A Slave. He's Just An Average Quarterback

Ian Haworth
|
Posted: Nov 18, 2019 8:58 AM
Share   Tweet
The opinions expressed by columnists are their own and do not necessarily represent the views of Townhall.com. 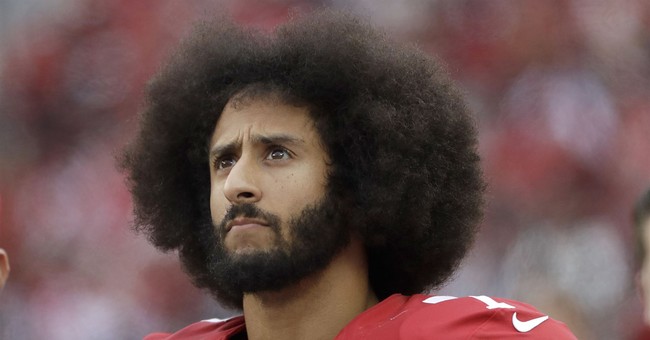 After capitulating to mounting pressure from Colin Kaepernick and his political base, the NFL announced that they would organize a private workout for the former quarterback, whose absence from the league since 2016 has been at the center of an ongoing feud. His advocates argue, without any evidence, that the refusal of all NFL teams to sign Kaepernick is a symptom of white supremacy in action. Anyone with any understanding of statistics or private enterprise understand that the true reason for Kaepernick’s free agency is the fact that he is a demonstrably average quarterback.

Kaepernick’s supporters, who demand that the NFL provide him with employment, see his repeated failure, both as a player and a leader, as an irrelevant detail. They do not see the NFL - or other professional leagues - as meritocracies which are intentionally blind to political orientation, and view their insistence on rewarding success and punishing failure as a tool of suppression. When you reject the fundamental premise of professional sports in favor of aggressive politicization, the metric of success is no longer sporting prowess, but activism.

The private session provided by the NFL would have allowed Kaepernick an on-field workout and an interview, with video footage made available to every team. The NFL practically bent over backwards to cater to Kaepernick, with the obvious goal of enabling his re-entry into the league. This would seem like an astonishing opportunity to anyone who claimed to be motivated solely by their desire to play professional sports.

Instead of attending the private workout at the Atlanta Falcons’ practice facility, Kaepernick cancelled the session thirty minutes before it was scheduled to begin and announced that he would conduct his own workout at Drew High School in Riverdale, Georgia. As final proof of his true intentions, Kaepernick wore a “Kunta Kinte” t-shirt during the session. Apparently, the voluntary rejection of an opportunity to demonstrate sporting ability is equivalent to the brutal treatment of slaves dragged to the United States from Africa.

Kaepernick has proved to us, yet again, that he is motivated exclusively by his narcissistic activism for which his continued state of assumed victimhood is a vital component. He must remain in a perpetual state of victimhood - even if this means repeatedly rejecting the opportunity to avoid such alleged “ill treatment” - if his activism is to be taken seriously by his “woke” support base.

The reason Kaepernick relies heavily on his pre-emptive and self-prescribed victimhood status is that he is fully aware of his own limited abilities in the apolitical realm of sports, with his workout performance described as “average.” Anyone who still believes that Kaepernick has a right to employment in one of the most competitive athletic organizations in the world despite his demonstrated mediocrity are not interested in sports. They only wish to hijack the platform of professional sports to further their own political objectives. Kaepernick is a willing participant who is trying to use activism as a proxy for talent. The fact that his protests only began after his career began to disintegrate is further proof that he is trying to leverage the politicization of every element of our society to his advantage.

Kaepernick has shown time after time that he is only interested in playing football on his terms, where his historically-average performances are forgiven in favor of his political views. The success of professional sports is built upon a non-political meritocracy where success is rewarded and failure is punished. If we allow the woke Left to monopolize sports for their own cynical political objectives, we will be conceding the very nature of professional sports to an audience who couldn’t care less about football, basketball, baseball, hockey, or even soccer. If they cared about football, they would understand that having a bottom-of-the-league 59.2% pass completion rate and throwing 2,241 passing yards doesn’t give you the right to demand employment when your primary role involves throwing a football.

If Kaepernick wants to continue kneeling to protest supposed police brutality and systemic racism, that is his prerogative under the First Amendment. However, until the woke Left can point to the line in the Constitution or Bill of Rights which guarantees an NFL roster spot for a quarterback who can’t throw a football, Kaepernick will have to continue to earn millions of dollars for “sacrificing everything,” even if his supporters refuse to acknowledge that his is actively trying to avoid sacrificing anything.