Mob Rule - Two Debate Changes That Must Be Made

Ian Haworth
|
Posted: Aug 05, 2019 8:23 AM
Share   Tweet
The opinions expressed by columnists are their own and do not necessarily represent the views of Townhall.com. 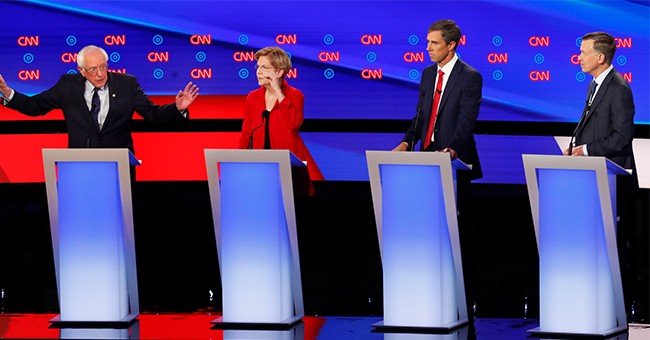 After suffering through four Democratic debates, with each lasting well over two hours, it’s becoming increasingly clear that they are not providing the candidates with an objective and competitive platform. With two minor changes, we could put an end to a debate system which rewards politicians who refuse to follow the rules or pander to the crowd to distract or deflect.

One of the largest problems with the state of our political discourse is mob rule. Allowing an audience to attend a political debate provides a physical manifestation of a social media environment, where statements are judged not for their validity, but on the number of “likes” they receive in the form of cheers and applause.

In the most recent round of debates, Rep. John Delaney criticized the progressive wing of the Democratic Party regarding the impracticality of their healthcare proposals, and the damage these policies could do to their presidential campaign. Elizabeth Warren responded with this pre-prepared and completely irrelevant response, and enjoyed immediate rapturous acclamation.

“I don’t understand why anybody goes to all the trouble of running for president of the United States just to talk about what we really can’t do and shouldn’t fight for. I don’t get it.”

Similarly, when questioned on whether his healthcare promises were at all realistic by Rep. Tim Ryan, Bernie Sanders retorted with:

Again, laughter and cheers. But in both instances, neither of the comments were relevant to the accusation made, and enabled Warren and Sanders to avoid having to address the specific criticisms leveled against them. Removing all crowd reactions would make this attempt at distraction obvious, thereby making it far harder for politicians to escape with crowd-pleasing nonsense.

Cut off the Microphone

In a bid to improve upon the lawlessness of the MSNBC debate, CNN attempted to enforce a stricter time limit policy. When the debate began, the rules were clearly explained. Candidates would have 60 seconds to respond to questions from moderators, 30 seconds for responses and rebuttals, and 15 seconds to answer clarification questions from moderators. In addition, candidates who were attacked by name by another candidate would have 30 seconds to respond.

Some candidates followed these rules, showing respect for their opponents. Joe Biden has often cut himself short to avoid running over the time limit. However, the same respect was not shown by every candidate. Most notably, Kamala Harris - who was under severe pressure after being rocked by Joe Biden and Tulsi Gabbard - routinely ignored the moderators as she attempted to twist her way out of a tailspin. Beyond repeated requests, the moderators were powerless to stop her.

The answer here is a strict enforcement of time limits, which can be achieved by cutting off a candidate’s microphone when their allotted time has elapsed. If they cannot be heard, there is no longer any strategic advantage to ignoring the rules.

There will be some predictable concerns here, such as the need for reliable technology and unbiased moderation. However, if these solutions were applied, the clear advantage held by candidates who flagrantly ignore debate rules would be eradicated, forcing them to provide concise and tempered rhetoric. This would, in turn, help prospective voters to determine who the best candidate is based on their policies, rather than their ability to pander to the mob.

Share this on Facebook
Tweet
Rand Paul Tweets Out Asking If 'Snot-nosed Censors at YouTube Will Come to My Office and Kiss My …'
Rebecca Downs
Loudoun County Public Schools Remove Sexually Explicit Book from Library
Landon Mion
Michigan Dems Say Parents Shouldn’t Tell Schools What to Teach
Landon Mion
Here's the Interesting Tidbit About All Those Doctors Who Called Joe Rogan a Menace to Public Health
Matt Vespa
Walensky Says She Will Improve Messaging Surrounding COVID-19
Madeline Leesman
The Real Reason Australia Deported Tennis Star Novak Djokovic...And It Had Nothing to do With COVID
Matt Vespa