The Bay of Pigs: The Sickening Truth Part II, The Battle is Joined

Humberto Fontova
|
Posted: Apr 16, 2022 12:01 AM
Share   Tweet
The opinions expressed by columnists are their own and do not necessarily represent the views of Townhall.com. 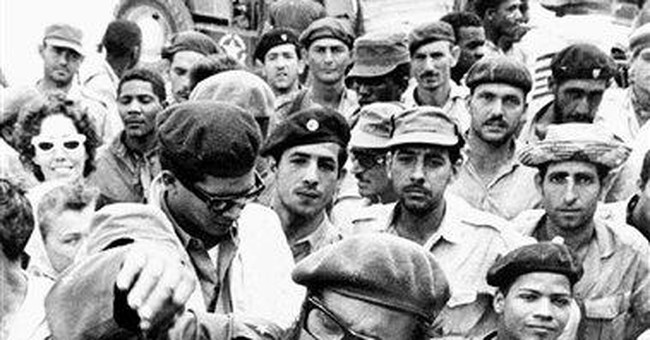 "They fought like Tigers," wrote a CIA officer who helped train the Cuban freedom-fighters who landed at The Bay of Pigs 61 years ago this week... "But their fight was doomed before the first man hit the beach."

That CIA man, Grayston Lynch, knew something about fighting -- and about long odds. He carried scars from Omaha Beach, The Battle of the Bulge and Korea's Heartbreak Ridge. But in those battles, Lynch and his band of brothers could count on the support of their own chief executive.

At the Bay of Pigs, Lynch and his band of Cuban brothers learned -- first in speechless shock and finally in burning rage -- that their most powerful enemies were not Castro's Soviet-armed and led soldiers massing in Santa Clara, Cuba, but the Ivy League's Best and Brightest dithering in Washington.

Lynch trained, in his own words, ''brave boys most of whom had never before fired a shot in anger." Short on battle experience, yes, but they fairly burst with what Bonaparte and George Patton valued most in a soldier -- morale. They'd seen the face of Castro/Communism point-blank: stealing, lying, jailing, poisoning minds, murdering.

They'd heard the chilling "Fuego!" as Castro and Che's firing squads murdered thousands of brave countrymen. More importantly, they heard the "Viva Cuba Libre!" from the bound and blindfolded patriots, right before the bullets ripped them apart. They set their jaws and resolved to smash this murderous barbarism that was ravaging their homeland. And they went at it with a vengeance.

“Where are the planes?!” kept crackling over U.S. Navy radios 61 years ago from a Cuban beachhead. “Where is our ammo?! Send planes or we can’t last!” The pleas came from Commander Jose San Roman as Soviet tanks, Soviet artillery and tens of thousands of Soviet-led troops pounded the 1400 Cuban freedom-fighters he commanded on a bloody and heroic beachhead now known as the Bay of Pigs.

The same heartsick (some actually sobbing) U.S. Navy men listening to these pleas had escorted these freedom–fighters to that beachhead. Their ships—including the aircraft carrier Essex groaning under a heavy load of deadly Skyhawk jets-- sat just offshore.

"If things get rough," radioed back the heartsick CIA man who helped train and befriended them, “we can come in and evacuate you."

"We will NOT be evacuated!" San Roman roared back to his friend Lynch. "We came here to fight! We don't want evacuation! We want more ammo!  We want the planes that were promised!  This ends here!

Camelot’s criminal idiocy as the freedom-fighters battle savagely against outrageous odds finally brought Adm. Arleigh Burke of the Joints Chief of Staff, who was receiving the battlefield pleas, to the brink of mutiny. Years earlier, Adm. Burke sailed thousands of miles to smash his nation's enemies at the Battle of Leyte Gulf. Now he was Chief of Naval Operations and stood aghast as new enemies were being given a sanctuary 90 miles away!

The fighting admiral was livid. They say his face was beet red and his facial veins popping as he faced down his commander-in-chief that fateful night of April 18, 1961. "Mr. President, TWO planes from the Essex! That's all those Cuban boys need, Mr. President. Let me order...!"

Finally, JFK relented and allowed some Skyhawk jets to take-off from the Essex. One of these pilots quickly spotted a long column of Castro’s Soviet tanks making for the freedom-fighters. The Soviet tanks and trucks were sitting ducks. "AHA!" he thought. "Now we'll turn this thing around!" The pilot started his dive...

"This is crazy!" he bellowed back. "Those guys are getting the hell shot out of them down there! I can SEE it!!" Turned out, JFK had allowed them to fly and look -- but not to shoot!

Some of these Navy pilots admit to sobbing openly in their cockpits. They were still choked up when they landed back on the Essex. Now they slammed their helmets on the deck, kicked the bulkheads and broke down completely.

"I wanted to resign from the Navy," said Capt. Robert Crutchfield, the decorated naval officer who commanded the destroyer fleet off the Bay of Pigs beachhead. He'd had to relay Washington's replies to those pilots.

A close-up glimpse of the heroism on that beachhead might have sent those Essex pilots right over the edge. As JFK adjusted his bow tie in the mirror and Jackie picked lint off his tux, the men of Brigada 2506 faced a few adjustments of their own. To quote Haynes Johnson, "It was a battle when heroes were made." And how!

We call them "men," but Brigadista Felipe Rondon was 16 years old when he grabbed his 57 mm cannon and ran to face one of Castro's Stalin tanks point-blank. At 10 yards he fired at the clanking, lumbering tank and it exploded, but the momentum kept it going and it rolled over little Felipe.

Gilberto Hernandez was 17 when a round from a Czech burp gun put out his eye. Castro troops Soviet-led were swarming in classic Soviet human-wave fashion but he held his ground, firing furiously with his recoilless rifle for another hour until the swarm of Reds finally surrounded him and killed him with a shower of grenades.

By then the invaders sensed they'd been abandoned. Ammo was almost gone. Two days of shooting and reloading without sleep, food or water was taking its toll. Many were hallucinating. That's when Castro's unmolested Soviet Howitzers opened up, huge 122 mm ones, four batteries' worth. They pounded 2,000 rounds into the Brigada's ranks over a four-hour period. "It sounded like the end of the world," one recalled year later to your humble servant here.

"Rommel's crack Afrika Corps broke and ran under a similar bombardment," wrote Haynes Johnson. By now the invaders were dazed, delirious with fatigue, thirst and hunger, too deafened by the bombardment to even hear orders. So their commander had to scream.

"NO RETREAT!" stood and bellowed company commander Maximo Cruz to his dazed and horribly outnumbered men. "We stand and fight!" And so they did….and wrote as glorious a page in military history and the annals of freedom as you’ll ever read.

Right after the deadly shower of Soviet shells, more Soviet tanks rumbled up. Another boy named Barberito rushed up to the first one and blasted it repeatedly with his recoilless rifle, which barely dented it, but so rattled the occupants that they opened the hatch and surrendered. In fact, they insisted on shaking hands with their young captor, who an hour later was felled by a machine gun burst to his valiant little heart.

These things went on for three days.

The Brigada's spent ammo inevitably forced a retreat. Castro's jets and Sea Furies were roaming overhead at will and tens of thousands of his Soviet-led and lavished troops were closing in. The Castro planes now concentrated on strafing the helpless, ammo-less freedom-fighters.

"Can't continue,” crackled over the navy radios. It was San Roman again. "Have nothing left to fight with...out of ammo...Russian tanks in view...destroying my equipment." Then the radio went dead.

"Tears flooded my eyes," wrote CIA man and multi-deocrated WWII hero Grayston Lynch. "For the first time in my 37 years I was ashamed of my country."

When the smoke cleared and their ammo had been expended to the very last bullet, when a hundred of them lay dead and hundreds more wounded, after three days of relentless battle, barely 1,400 of them — without air support (from the U.S. Carriers just offshore) and without a single supporting shot by naval artillery (from U.S. cruisers and destroyers poised just offshore) — had squared off against 21,000 Castro troops, his entire air force and squadrons of Soviet tanks. The Cuban freedom-fighters inflicted over 3000 casualties on their Soviet-armed and led enemies. This feat of arms still amazes professional military men.

"We shall pay any price, bear any burden, meet any hardship, support any friend, oppose any foe, in order to assure the survival and the success of liberty!" proclaimed Lynch’s Commander-in-Chief a year earlier.