Air Strikes in Syria—None in Cuba

Humberto Fontova
|
Posted: Feb 27, 2021 12:01 AM
Share   Tweet
The opinions expressed by columnists are their own and do not necessarily represent the views of Townhall.com. 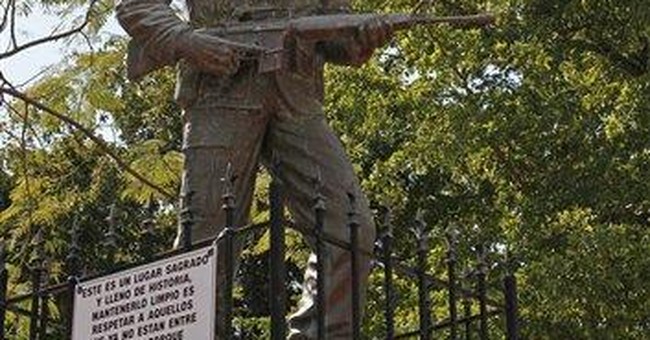 “Since Vietnam, the Democratic Party has supported foreign intervention only if it serves no interest of the United States. If it serves our national security interest, they are hysterically opposed to it…The incontrovertible lesson of history is, if at all possible, don't allow Democrats anywhere near foreign policy," Ann Coulter has observed.

“Where are the planes?” kept crackling over U.S. Navy radios 60 years ago right off our southern coast. The U.S. Naval armada (22 ships including the Carrier Essex loaded with deadly Skyhawk jets) was sitting 16 miles off the Cuban coast near an inlet known as Bahia de Cochinos (Bay of Pigs.) The question—bellowed between blasts from a Soviet artillery and tank barrage landing around him—came from commander Pepe San Roman, who led an amphibious force of 1,500 Cuban freedom-fighters.

“Send planes or we can’t last!” San Roman kept pleading to the very fleet that escorted his men to the beachhead. Meanwhile the barrage intensified, the Soviet T-34 and Stalin tanks closed in, and San Roman’s casualties pile up.

"If things get rough," the heartsick CIA man Grayston Lynch, a multi-decorated WWII and Korea vet, radioed back, "we can come in and evacuate you."

"We will NOT be evacuated!" Pepe roared back to his friend Lynch. "We came here to fight! We don't want evacuation! We want more ammo! We want PLANES! This ends here!" Lynch kept sending the requests Washington-ward with all of San Roman’s urgency.

Along with the Bay of Pigs freedom fighters, Castro faced 179 bands of “bandits” (Che Guevara’s term for the thousands of Cubans fighting his dutiful Stalinization of Cuba that year, a rebel force desperately fighting what would shortly be the biggest military threat the U.S. faced since the war of 1812.)

But San Roman and Lynch’s urgency to Washington was futile.

Camelot’s criminal idiocy finally brought Adm. Arleigh Burke of the Joints Chief of Staff, who was receiving the battlefield pleas, to the brink of mutiny. Years before, Adm. Burke sailed thousands of miles to smash his nation's enemies at the Battle of Leyte Gulf. Now he was Chief of Naval Operations and stood aghast as new enemies were being given a sanctuary 90 miles away! The fighting admiral was livid. They say his face was beet red and his facial veins popping as he faced down his commander-in-chief that fateful night of April 18, 1961. "Mr. President, TWO planes from the Essex!" (the U.S. Carrier just offshore from the beachhead), "that's all those Cuban boys need, Mr. President. Let me order...!"

"WE put those Cuban boys there, Mr. President!" The fighting admiral exploded. "By God, we ARE involved!" While the Knights of Camelot mulled over their image problems, the men on the beachhead had problems of their own...

"Sorry," replied the Essex. "Our orders are ..." The Cuban freedom-fighter pilot didn't hear the rest of his death sentence. An explosion and his radio went dead. These messages went on and on, hour after hour, from different pilots in their lumbering B-26s to no avail. By the second day, nearly half of these almost suicidally brave freedom-fighter pilots had met a fiery death from Castro's jets.

This was too much for their enraged and heartsick American trainers at the base in Nicaragua. Four of them suited up, gunned the engines and joined the fight. These weren't Ivy Leaguers. They were Alabama Air Guard officers, men with archaic notions of loyalty and honor. They were watching the decimation of lumbering U.S. B-26’s against Castro’s jets. They knew the odds. They went anyway.

All four died on that first mission. All four (Pete Ray, Riley Shamburger, Leo Barker, and Wade Grey) have their names in a place of honor alongside their fallen Cuban comrades on The Bay of Pigs Memorial, plus streets named after them in Miami's Little Havana, plus their crosses at Miami's Cuban Memorial cemetery.

Finally JFK relented and allowed some Skyhawk jets to take-off from the Essex. One of these pilots quickly spotted a long column of Castro’s Russian tanks and trucks making for the freedom-fighters. The Soviet tanks and trucks were sitting ducks. "AHA!" he thought. "Now we'll turn this thing around!" The pilot started his dive...

"This is CRAZY!" the Navy pilot bellowed back. "Those guys are getting the hell shot out of them down there! I can SEE it!!" Turned out, JFK had allowed them to fly and look -- but not to shoot! Some of these Navy pilots (no tear-squeezers for camera-ops, heaven knows!) admit to sobbing openly in their cockpits. They were still choked up when they landed on the Essex. Now they slammed their helmets on the deck, kicked the bulkheads and broke down completely.

"I wanted to resign from the Navy," said Capt. Robert Crutchfield, the decorated naval officer who commanded the destroyer fleet off the beachhead. He'd had to relay Washington's replies to those pilots.

A close-up glimpse of the heroism on that beachhead might have sent those Skyhawk pilots right over the edge. As JFK adjusted his bow tie in the mirror and Jackie picked lint off his tux, the men of freedom-fighting Brigada 2506 faced a few adjustments of their own. To quote Haynes Johnson, "It was a battle when heroes were made." And how! We call them "men," but Brigadista Felipe Rondon was 16 years old when he grabbed his 57 mm cannon and ran to face one of Castro's Stalin tanks point-blank. At 10 yards he fired and it exploded, but the momentum kept it going and it rolled over little Felipe.

Gilberto Hernandez was 17 when a round from a Czech burp gun put out his eye. Castro’s Soviet-led troops were swarming in but he held his ground, firing furiously with his recoilless rifle for another hour until the Stalinists finally surrounded him and killed him with a shower of grenades.