Humberto Fontova
|
Posted: Oct 17, 2020 12:01 AM
Share   Tweet
The opinions expressed by columnists are their own and do not necessarily represent the views of Townhall.com. 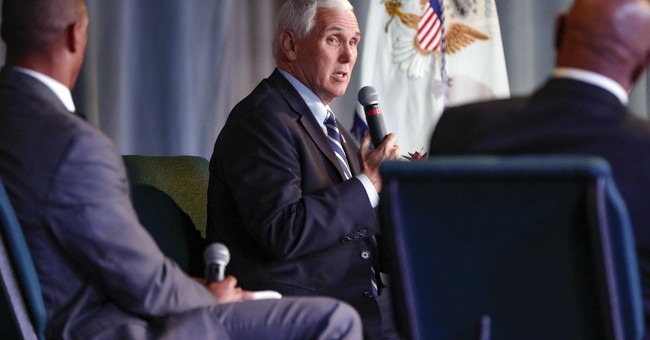 “It is great to be back in the Sunshine State with so many champions for freedom, just 19 days away from a great victory all across Florida and all across America. But standing here, near the hallowed grounds of Memorial Cubano, it is my great honor, on behalf of our president, to accept the endorsement of these extraordinary heroes of the Cuban exiled community. Thank you so much. I thank you so much for the honor and for the support,” Vice President Pence at the Cuban Memorial, Oct. 15.

Far from honoring communist murder victims, Obama visited Cuba to gift the mass-murderers a financial lifeline, covered his heart while posing with Che Guevara and raised Raul Castro’s arms in triumph. Could the choice in this election be any starker?

You’ll often find people with itchy noses and red-rimmed eyes ambling amidst the long rows of white crosses at Tamiami Park on Coral Way and 107 Avenue in Miami.

It’s a mini-Arlington cemetery called the Cuban Memorial, in honor of Castro and Che Guevara’s murder victims and those who fell trying to free Cuba from the murderous barbarism they imposed with their Soviet overlords while "The Best and Brightest" dithered, bumbled, and finally betrayed.

But the crosses at the Cuban Memorial are symbolic. Most of the bodies still lie in mass graves dug by bulldozers on the orders of the Stalinist dictator who Jimmy Carter called “an old friend” and his mass-murdering henchman who Obama saw fit to pose in front of with hand his over heart.

Never heard of this Cuban Memorial in the mainstream media? Well, it honors the tens of thousands of Fidel Castro and Che Guevara’s victims (many of them U.S citizens, by the way). Need I say more about the media blackout? I didn’t think so.

Some of these Cuban Memorial visitors will be kneeling, others walking slowly, looking for a name. You remember a similar scene from the opening frames of Saving Private Ryan. Many clutch rosaries. Many of the ladies will be pressing their faces into the breast of a relative who drove them there, a relative who wraps his arms around her spastically heaving shoulders.

Try as he might not to cry himself, he usually finds that the sobs wracking his mother, grandmother, or aunt are contagious. Yet he’s often too young to remember the face of his martyred uncle, father, or cousin — the name they just recognized on the white cross.

"Fusilado" — firing squad execution — it says below it.

According to the Black Book of Communism these total 16,000, all at the orders of the man Democrat presidential candidate George McGovern called “likable and a good friend.” Even many of the older men walking among these crosses will be red-eyed, choked up.

The elderly lady still holds a tissue to her eyes and nose as they wait to cross the street after leaving the memorial. Her red-eyed grandson still has his arm around her. She told him about how his freedom-fighter grandfather yelled "Viva Cuba Libre!" and "Viva Cristo Rey!" the instant before the volley of Russian bullets shattered his body.

They cross the street slowly, silently, and run into a blue and orange-haired harpy waving a Black Lives Matter placard. Her T-shirt sports the face of her husband’s cowardly executioner, Che Guevara. You, friends, tell me how she might feel?

Another woman will go home after placing flowers under her father’s cross — a father she never knew. "Killed in action, Bay of Pigs, April 18th, 1961" reads the inscription on his cross. She was 2 at the time. "We will not be evacuated!" yelled her father’s commander into his radio that day, as 41,000 Red Troops and swarms of Stalin tanks closed the ring on her father and his 1,400 utterly abandoned Band of Brothers. "The Best and Brightest" all had important social engagements that day.

"We came here to Fight!" her father’s commander kept yelling at the enraged and heartsick CIA man offering to evacuate them from the doomed beachhead. "Let it end here!" was his last yell, barely audible over the deafening blasts from the storm of Soviet artillery.

Her 23-year-old father — an accountant in Cuba a year before, a dish-washer in a Miami Hotel only two months before, and now grim-faced, thirst-crazed, and delirious after three days of continuous ground combat — heard the order from his commander: "No Retreat! We Stand and Fight!" and rammed in his last clip. By then he’d long realized he’d never see his daughter’s graduation.

His ammo expended, and no more coming on the specific orders of "The Best and Brightest," he fell among the bodies of 100 of his Band of Brothers, after mauling his communist enemies to the score of 20 to one. "Wimps! Yes, Wimps!" the woman hears Democrat Party Golden Boy Michael Moore label her father and his Band of Brothers in one of America’s best-selling books. "Crybabies too!"

Again, friends, you tell me how she might feel.

Castro murdered her relatives, shattered her family and plunged a nation — which had double Japan’s per capita income in 1958, plus net immigration from Europe — into a pesthole that repels even half-starved Haitians. He jailed, tortured, and murdered more political prisoners than pre-war Hitler, and about 20 times as many as Mussolini.

He asked, pleaded, and finally tried to cajole the Butcher of Budapest into an obliterating nuclear strike against America. Failing there, he tried to blow up Macy’s, Gimbels, Bloomingdale's, and Grand Central Station with more TNT than used by Madrid subway terrorists.

Yet he’s hailed as "One Helluva Guy" by Ted Turner; as "Very likable, a man I regard as a friend!" by George McGovern; and "Way Too Cool!" by Bonnie Raitt, among dozens upon dozens of other accolades by dozens of other liberal scoundrels and imbeciles. Tens of thousands of Cubans (and dozens of Americans) fought him. "We were fighting for Cuba’s freedom as well as America’s defense. To call us mercenaries is a grave insult," says Alabama Air guard officer Albert Persons about his and his Alabama comrades’ heroism during the battle of The Bay of Pigs. The Ivy League’s Best and Brightest might sell our comrades out, they snorted. We sure as hell won’t.

It was more than bluster, too. Four U.S. volunteers — Pete Ray, Riley Shamburger, Leo Barker, and Wade Grey — suited up, gunned the engines, and joined the fight. These were Southern boys, not pampered Ivy Leaguers, so there was no navel-gazing. They had archaic notions of right and wrong, of honor and loyalty, of who America’s enemies really were. Their Cuban comrades — men they’d trained and befriended — were being slaughtered on that heroic beachhead. Knowing their lumbering B-26s were sitting ducks for Castro’s unmolested jets and Sea Furies, all four Alabama air guard volunteers flew over the doomed beachhead to lend support to their betrayed brothers in arms.

All four were shot down. All four have their names in a place of honor next to their Cuban comrades on the Bay of Pigs Memorial, plus streets named after them in Little Havana, plus their crosses at the Cuban Memorial.

When Doug MacArthur waded ashore on Leyte, he grabbed a radio: "People of the Philippines: I have returned. By the grace of Almighty God our forces stand again on Philippine soil — soil consecrated in the blood of our two peoples."