Humberto Fontova
|
Posted: May 09, 2020 12:01 AM
Share   Tweet
The opinions expressed by columnists are their own and do not necessarily represent the views of Townhall.com. 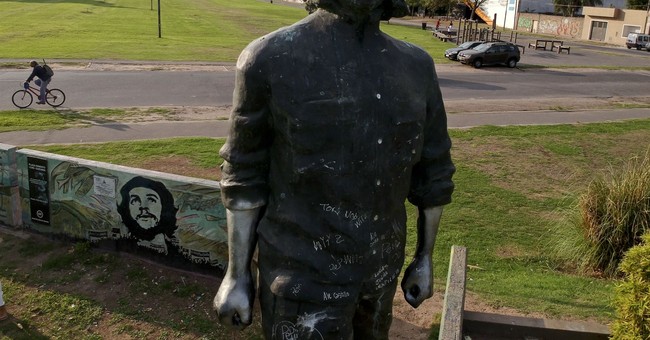 "We have a son named Jesus Ernesto. The first name is for Jesus Christ and the second for Ernesto Che Guevara…an exemplary revolutionary who gave his life for his ideals.” (Mexican President Andres Manuel Lopez-Obrador. (May 17, 2017.)

“For the Chicano Movement …the Cuban Revolution of 1959 stood as a Latino revolutionary influence that told Chicanos that they could also struggle against their own internal colonized status within the U.S. and to achieve their own self-determination.  Images of Fidel Castro and especially those of Che Guevara became standard for the Chicano Movement," wrote Marcio Garcia in the National Catholic Reporter.

In the historic annals of unrequited love few cases rival the affair by Mexicans and Chicanos with Che Guevara. I trust Che’s iconization is sufficiently documented by U.S. Chicano groups in their murals (i.e. graffiti.) They seem to plaster this lily white Argentinean racists and Marxist’s (a thoroughly European born and bred ideology) mug on practically everything they paint to celebrate their Amerindian Aztec culture. Go figure.

Perhaps a word with some Bolivian Amerindians who actually experienced Che Guevara’s plans to Stalinize their culture would help. In 1967 these (overwhelmingly indigenous) Bolivians (with help from U.S. Green Berets) made short work of this Chicano/Mexican hero. If a picture’s worth a thousand words then this one’s worth a million. Please note the obvious ethnic compositions of the gentlemen proudly and triumphantly holding their guns over their vanquished European would-be enslaver.

At any rate, if any doubt remains about Che Guevara’s iconization by Chicanos I give you: “The Last Supper of Chicano Heroes." This paining “is a re-construction of da Vinci's painting 'The Last Supper,' replacing religious figures with Chicano activists. Artist José Antonio Burciaga polled Chicano students and activists to determine who would be depicted.”

You guessed it. Che Guevara sits at the head of the table.

You see, amigos: Prior to “invading” Cuba, Castro’s “guerrillas” “trained” in Mexico.  Some of these former “guerrillas” later defected to the U.S. and revealed how the sneering Ernesto “Che” Guevara constantly insulted his Mexican hosts. Hence, the quote at the top of this article.

It was in 1955 that a Cuban criminal named Fidel Castro linked up with an Argentine hobo named Ernesto Guevara in Mexico City. Minus this historic hook-up everything points to Ernesto (shortly known as “Che”) continuing his life of a traveling hobo, panhandling, mooching off women, staying in flophouses and scribbling unreadable poetry.

Alas! Instead this thoroughly unimposing vagabond and psycho named Ernesto Guevara had the magnificent fortune of linking up with modern history's top press agent, Fidel Castro, who over half a century had the mainstream media anxiously scurrying to his every beck and call and eating out of his hand like trained pigeons.

“Foreign reporters — preferably American,” later wrote Che Guevara in his diaries, “were much more valuable to us at that time (1957-59) than any military victory. Much more valuable than recruits for our guerrilla force were American media recruits to export our propaganda.”

In brief, decades before the media moniker became popular, Fidel Castro recognized the “Fake News Media” for what it was, and harnessed it to his enormous and everlasting advantage.

Fidel and Raul were in Mexico putting together a guerrilla band to invade Cuba and overthrow the black Cuban head-of-state Fulgencio Batista. With the financial help of his wealthy lily-white Cuban backers of the time, Castro hired a Cuban Korean war veteran named Miguel Sanchez to train his guerrilla band. None of the trainees had the slightest combat-experience so their extra-curricular curiosity on the matter did not surprise Sanchez.

“It became obvious to me that the man who would shortly become known as “Che” wanted to kill for the sake of the act itself,” recalled Sanchez later from exile in Miami, “instead of-- as in the case of most others, and this includes Fidel and Raul Castro themselves—as a means to an end. That end for Castro, of course, was absolute power,” Sanchez quickly recognized. “Fidel’s power lust fueled his killing, and it didn’t seem to affect him one way or the other. With Ernesto Guevara, however, it struck me as a different motivation, a different lust.”

"What pleasure! What Pleasure!”

“Ernesto Guevara would close his eyes dreamily and recite it from memory during all of my visits, even at the dinner table," recalled Sanchez.