Humberto Fontova
|
Posted: Mar 07, 2020 12:01 AM
Share   Tweet
The opinions expressed by columnists are their own and do not necessarily represent the views of Townhall.com. 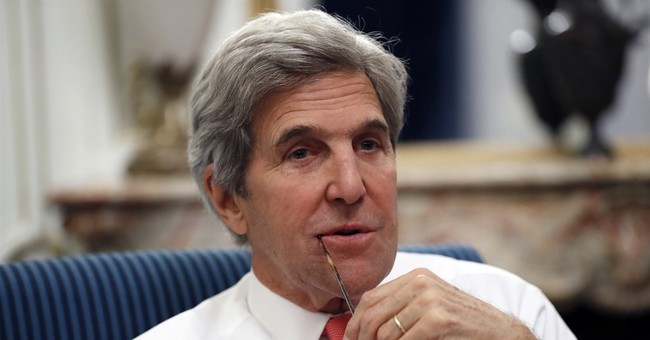 “I was impressed by their (the Sandinistas’) intelligence and their sincerity; these are not political hacks, you know? They have very deep convictions…(Daniel) Ortega is an impressive guy.” (Bernie Sanders, Sept. 1985)

“Daniel Ortega is a misunderstood Democrat NOT a Marxist autocrat.”  (Sen. John Kerry, after a visit to the Cuban-Soviet satrapy of Nicaragua in an attempt to sabotage President Reagan’s anti-communist Central American foreign policy in 1985)

OK, so in 1985, shortly after his Potemkin visit to the Soviet-Cuban satrapy of Nicaragua, Burlington Mayor Bernie Sanders made Puerto Cabezas, Nicaragua, and Burlington “sister-cities.”

'Whoopdee-DOO,' probably snickered the communist-terrorist Sandinistas at the time. On the other hand, freshman Democrat Senator John Kerry is really rolling up his sleeves and going to bat for us! To wit:

Back in the mid '80s, the Soviet-Cuban satrapy of Nicaragua was the “progressives’” latest City on a Hill, Daniel Ortega their latest Sir Galahad/Robin Hood. Many of Sen. John Kerry’s Democratic congressional colleagues were content to flutter their eyelashes at the communist cutthroat and pedophile from afar. Others, including Democratic Majority Leader Jim Wright, courted him with a perfumed love letter. “Dear Comandante,” the love letter began, “We want to commend you and the members of your government for taking steps to open up the political process in your country.”

In fact Nicaragua was then being Stalinized, with Fidel Castro’s help: wholsesale theft of private property, murder, exile and mass-jailings of anti-Communist opponents.  Apparently this process had John Kerry in such a rapt and giddy condition that he found the Democratic majority leader’s love note insufficiently adulatory. He yearned for a more intimate approach.

So mere weeks after entering office in 1985, John Kerry set off for Managua with fellow freshman Tom Harkin of Iowa for a chummy face-to-face session with the Communist pedophile and Castro-proxy Daniel Ortega.

They returned rapt. Cuban and Soviet ties with the Sandinistas? Baseless rumors—“McCarthyism” in fact—Kerry and his Democratic colleagues insisted. Kerry stood before Congress and (unwittingly) aped Neville Chamberlain upon his return from Munich in 1938 while waving a list of heart-warming liberal reforms that Ortega promised him were imminent.

'I hold here in my hands a piece of paper,' he should have beamed. Instead, Kerry called it, "a wonderful new opening!" The Massachusetts senator insisted that Nicaragua would soon blossom into tropical Sweden.

The most vital stanza of Daniel Ortega's Sandinista anthem (Latin American leftists catch an extra breath and sing it with all the fervor we use for 'Ban-ner ..ye-et WA-A-VE!') bashes the U.S. as "El E-NE-MIGO de la HU-MA-NI -DAD!) (the enemy of humanity!) The line was probably lifted from a Che Guevara speech. Naturally the authors of such an anthem stole the heart of many Democrats.

Upon Kerry’s return from Nicaragua, Congress swallowed his BS in one mighty gulp and killed President Reagan’s Contra-aid bill. For the brain dead: this was Kerry's (and Castro and Ortega’s) goal all along. Then it took an entire week after the congressional vote killing all aid to his anti-Communist opponents for Ortega to fly to Moscow, flout his Soviet ties for all the world to see, and return with a $200 million Communist aid package.

So Congress, rotten egg dripping slowly off its face, reversed itself and finally and very reluctantly approved Reagan's Contra aid.

But Kerry was undaunted. Castro and Ortega must prevail, he fumed! Soon he was chairing "The Senate Subcommittee on Narcotics, Terrorism and International Operations" quickly dubbed "The Kerry Committee" by his media cronies and soulmates. Soon it was boasting "77 instances where the Reagan administration misled Congress about its policies in Central America!"(I hold here in my hands a piece of paper! yet again.)

Lest we forget, it was here that the famous "Iran-Contra investigation" actually started. Soon the lurid accusations spawned an "Iran-Contra Committee "of its own and Kerry pressed ahead with his.

The Democratic crusade to throttle the Nicaraguan freedom-fight was now under full steam. One Cuba wasn't enough for these people. They were the best and brightest of a new generation. They'd picked up the torch from Camelot. The honor demanded that they pledge themselves to create another tropical Gulag and slaughterhouse on our doorstep. If Latin freedom fighters battled desperately in the field against a Soviet-supplied enemy--if these freedom-fighters had their backs against the wall-- if any looked northward through sweat-stung eyes and blood-drenched bandages for an ally--if hundreds were dying in freedom's cause with gritted teeth in a desperate and uneven struggle against a Communist common enemy--then these freedom-fighters MUST BE STABBED IN THE BACK! The legacy of Camelot DEMANDED IT!

Towards that noble goal John Kerry committed himself body and soul. Soon his Committee was leaking lurid details of a nefarious CIA/Contra drug smuggling plot with a Cuban-American Bay of Pigs veteran named Felix Rodriguez as the bagman and Vice President George H.W. Bush as a silent partner. (Perhaps as further motivation for people like John Kerry to defame him, Felix Rodriguez played a key role in capturing Che Guevara.)

The freshman senator from Massachusetts was on a serious roll that summer of 1987. The high-rolling, media-lauded Kerry Committee finally subpoenaed Felix Rodriguez himself, figuring they had a shivering and supple victim.

Ha! “Senator my name was leaked by your Committee as being involved with drug smuggling," an undaunted Rodriguez started his testimony. "I take that very seriously. It affects my family and my reputation."

"Senator this slander was in every g**d***ed newspaper after your committee's last closed hearing," Rodriguez shot back, "saying I solicited drug money for the Contras. That, Senator Kerry, is a d***ed lie!"

Whoops! Kerry practically gaped and his forehead furrowed further. He stuttered. He started rambling well off the subject, asking Rodriguez about Che Guevara’s capture and why he hadn't fought harder to save his life, etc. (what this had to do with the hearings has never been explained. But that Rodriguez played a key role in capturing a Stalinist mass-murderer whose lifelong craving was to nuke the U.S. undoubtedly distressed Democrats like John Kerry.)

"SENATOR!" an exasperated Rodriguez finally shot back. "It's difficult for me to answer questions from a man I DO NOT RESPECT!"

Kerry gaped. The NERVE!  A liberal Democrat Kerry had always been a media darling, soft-soaped and soft- balled by the media (this was before Fox News, talk-radio and the internet.)  Now some “deplorable” Cuban refugee had him seriously rattled. But Rodriguez didn't miss a beat --naming dates and witnesses, citing documents--he proceeded to demolish every accusation against him by these high-rolling Democrats.

Oh!...and regarding the current state of Daniel Ortega’s Nicaragua? Well, a one-time ally of Bernie and Kerry on Nicaragua, Bianca Jagger, has come full-circle and now denounces Daniel Ortega as “worse than (the so-called dictator the Sandinistas overthrew) Somoza!”

We anxiously (and probably vainly) await similar confessions from Bernie and Kerry.