Trump Drops the Hammer on Castro and his Colluders in Crime, Who Squeal in Outrage

Humberto Fontova
|
Posted: Apr 27, 2019 12:01 AM
Share   Tweet
The opinions expressed by columnists are their own and do not necessarily represent the views of Townhall.com. 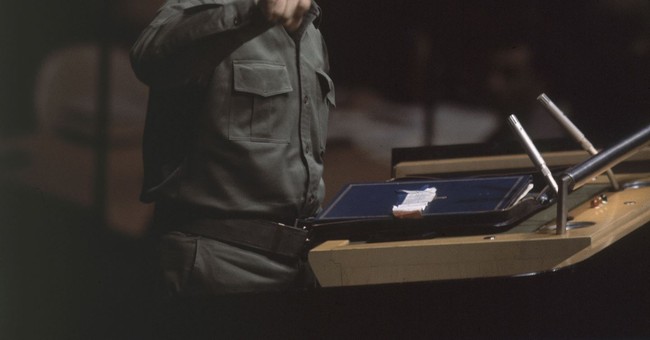 In a major shift, The Trump administration will allow lawsuits in U.S. courts for the first time against foreign companies that use properties confiscated by Communist-ruled Cuba since Fidel Castro’s revolution.”

“Major shift,” is spot on. The provision in the Helms Burton Act (i.e. codification of the “Cuba embargo”) allowing for these suits was passed with the act in 1996. But ever since, frowning, finger-wagging threats from the United Nations, European Union and the “international community” in general cowed every U.S. President into lowering his head, tucking his tail between his legs and waiving the lawsuit provision.

“Good boy!” snickered Castro and his European and Canadian partners in burglary as they merrily poked each other triumphantly in the ribs and patted the U.S. on the head. “That’s a good boy!”

That snickering, rib-poking and head-patting has now ceased, replaced by gasps, gulps, damp foreheads and sweaty palms. To wit:

“(The U.S. decision) is regrettable, and will have an important impact on legitimate EU and Canadian economic operators in Cuba,” EU Vice President Federica Mogherini, Canadian Foreign Minister Chrystia Freeland and EU Commissioner for Trade Cecilia Malmstrom said in a joint statement.”

Is that “the world’s smallest violin” I hear wailing mournfully in the background? John Bolton seems to hear it too:

“President Trump looked very carefully at this…I think this is clearly the right thing to do. Justice for Americans whose property was stolen by the Castro regime is long overdue…I can't wait for the lawsuits," he said last week.

Some of us clearly recall a U.S. Presidential candidate who stressed—almost from day one of his campaign-- that should he gain office, our trading partners would no longer take advantage of Americans.”

Little did these “trading partners” realize how far this defense of American interests would extend.

Sounds shocking, I know. But—contrary to liberal fairy tales--the embargo was NOT put into place simply because “Mean and Rich ‘Ole Scrooge/Uncle Sam” had a hissy fit after Castro threw out the mob and granted his everlastingly grateful subjects free and fabulous healthcare as they sang and danced the days away, in a manner to shame the merriment witnessed by Dorothy in The Emerald City.

In brief, amigos: The buzzard-like European, Asian, Canadian, etc. companies who swooped into Cuba rubbing their hands and snickering to partner with the Castroite thieves to take over, operate and profit from property STOLEN at Soviet gunpoint from U.S. citizens (some who were tortured and murdered for resisting the blatant theft) may finally face some justice at the hands of the theft victims.

You’d never guess this from the Cuba “reporting” by the Fake News Media but the reason for the Cuba embargo in the first place was Castro’s mass theft, at Soviet gunpoint, of almost 6,000 businesses in Cuba worth $9 billion (in current dollars) from U.S. citizens. A few American business owners who resisted were tortured and murdered.

The Inter-American Law Review classifies Castro’s mass burglary of U.S. property as “the largest uncompensated taking of American property by a foreign government in history.” Rubbing his hands and snickering in triumphant glee, Castro boasted at maximum volume to the entire world that he was freeing Cuba from “Yankee economic slavery!” (Che Guevara’s term, actually) and that “he would never repay a penny!” (this was the only promise Fidel Castro kept in his life!)

One of these American burglary victims was Howard Anderson, a successful businessman who owned a chain of service stations and a Jeep dealership (not a casino or brothel, which were relatively rare in pre-Castro Cuba, by the way.)  Mr. Anderson was a happy family man with four children and president of the American Legion's Havana Chapter. He was beloved in the Cuban community. Howard Anderson embodied in his athletic 6' 2" frame everything the Castroites most hated and resented (and envied.) I’ll quote from Anderson v. Republic of Cuba, No. 01-28628 (Miami-Dade Circuit Court, April 13, 2003).

“In one final session of torture, Castro’s agents drained Howard Anderson’s body of blood before sending him to his death at the firing squad.”

"Death to the American!" screamed Howard Anderson's communist “prosecutor” at his farce of a trial on April 17, 1961. "The prosecutor was a madman!" says a Swiss diplomat who witnessed the trial, "leaping on tables, shrieking, pointing, as Mr. Anderson simply glared back."

Two days after his "trial," Howard Anderson refused a blindfold, to glare at his executioners. Medically he was probably in shock at the time from the blood-draining. "Fuego!"  The bullets shattered Howard Anderson's body at dawn on April 19, 1961.

In fact, in stressing that (portions of) the Cuba embargo will FINALLY be enforced, President Trump is simply upholding U.S. law. Let’s turn to a section of the Cuba “embargo” (Helms-Burton Act) as codified into U.S. law. Here’sSec. 207, Settlement of Outstanding U.S. Claims to Confiscated Property in Cuba:

“The satisfactory resolution of property claims by a Cuban Government recognized by the United Statesremains an essential condition for the full resumption of economic and diplomatic relations between the United States and Cuba.”

But Castro’s apparatchiks laughed in the faces of Obama’s abject and apologetic 'negotiators' when they meekly tried broaching this “essential condition.” No matter. Obama opened the Cuban embassy (spy center) in Washington D.C. anyway.

“Helms-Burton Act,” by the way, refers to its authors, the late great Jesse Helms of North Carolina and the great Dan Burton of Indiana. The latter is shown here in an apparently delighted frame of mind while holding a signed book he patiently stood in line to obtain.