Did Media Slobbering Over Communist Dictatorships Begin Last Week at the Korean Olympics?

Humberto Fontova
|
Posted: Feb 17, 2018 12:01 AM
Share   Tweet
The opinions expressed by columnists are their own and do not necessarily represent the views of Townhall.com. 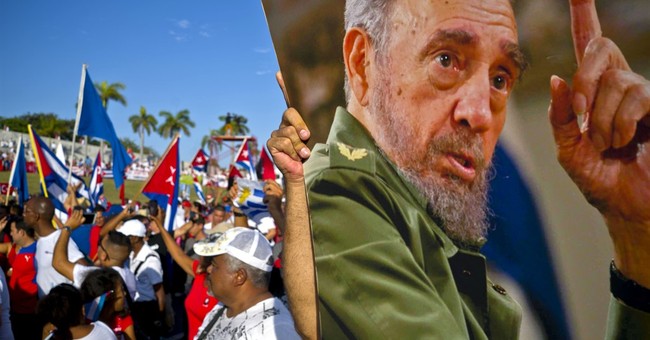 Regarding the Mainstream Media’s gushing over Communist dictator Kim Jong Un’s sister at the Olympics last week please excuse Cuba-watchers while we roll our eyes completely into their sockets and chant The Talking Heads’ famous line: “Same as it Ever Was!”

Actually, the term “same” doesn’t quite fit. Because if you actually read the New York Times, WaPo, CNN, etc. accounts of the Stalinist Kim Yo-jong at the Seoul Olympics they’re pretty tame–nothing remotely comparable to the decades-long outpouring of love-notes by the U.S. media to the Stalinist, mass-murdering, dictator 90 miles off our shores whose lifelong craving was to incinerate us all. Let’s compare:

“The ‘Ivanka Trump of North Korea’ captivates people in the South at the Olympics” (Washington Post.)

Pretty tame stuff, if you ask Cuba-watchers. Now here’s the type of stuff the mainstream media has been cooing about Fidel Castro relentlessly for over half a century:

“Fidel Castro could have been Cuba’s Elvis!” (Dan Rather.)

“Fidel Castro is one hell of a guy! “You people would like him!” (Ted Turner to a capacity crowd at Harvard Law School during a speech in 1997.)

“Castro has brought very high literacy and great health-care to his country. His personal magnetism is powerful, his presence is commanding!” (Barbara Walters.)

The sickening list is much, MUCH longer—so long in fact, that entire books have been written on this disgusting media phenomenon!

He jailed political prisoners at a higher rate than Stalin during the Great Terror, murdered more Cubans in his first three years in power than Hitler murdered Germans during his first six and came closest of anyone in history to starting a worldwide nuclear war. In the above process he converted a nation with a higher per-capita income than half of Europe and a huge influx of immigrants into a sh*thole that repels Haitians and boasts the highest suicide rate in the Hemisphere.

Who would guess any of this from reading the mainstream media? Instead we read almost exclusively the utterly bogus fairly tale about how he freed Cuba from the greedy clutches of U.S. robber barons and mobsters and bestowed his formerly downtrodden countrymen with free healthcare and education.  A scornful Uncle Sam then retaliated with a vindictive “embargo,” still in place.

Topping it all, three years ago Newsweek hailed Cuba as among “the best countries in the world to live” and Time rhapsodized that “people enjoy life in Cuba as in few other places. This about a country that saw TWENTY TIMES as many people die (horribly) trying to escape it as died trying to escape East Germany!

But “actions speak louder than words,” as they say. And the media actions that accompanied Fidel Castro’s visit to New York in 1996 for the UN’s 50th anniversary celebrations shout to the heavens. "The Toast of Manhattan!" read the Time Magazine headline covering the visit.  "The Hottest Ticket in Manhattan!" read the one by Newsweek.

After Castro’s whooping, hollering, foot-stomping ovation in the UN’s General Assembly, he was feted by New York’s best and brightest, hob-knobbing with dozens of Manhattan’s glitterati, power brokers and pundits.

First, there was dinner at the Council of Foreign Relations. After holding court there for a rapt David Rockefeller along with Robert McNamara, Dwayne Andreas and Random House’s Harold Evans, Castro flashed over to Mort Zuckerman’s 5th Avenue pad, where a throng of Beltway media luminaries, including a breathless Mike Wallace, Peter Jennings, Tina Brown, Bernard Shaw and Barbara Walters all jostled for a brief tryst, cooing and gurgling to Castro’s every comment. All clamored for autographs and photo-ops. Diane Sawyer was so overcome in the mass-killer’s presence that she rushed up, broke into that toothy smile of hers, wrapped her arms around the jailer and torturer of the most women political prisoners in modern history and smooched him warmly on the cheek.

“You people are the cream of the crop!” beamed the terror-sponsoring mass-murderer to the smiling throng that surrounded him, all of whom he’d craved to incinerate.

“Hear-hear!” chirped the delighted media luminaries while tinkling their wine glasses in appreciation and glee.

And Fidel Castro had barely scratched the surface of his New York fan club. According to the U.S.-Cuba Trade and Economic Council, on that visit, Castro received 250 dinner invitations from Manhattan celebrities and power-brokers.