Humberto Fontova
|
Posted: Feb 25, 2017 12:01 AM
Share   Tweet
The opinions expressed by columnists are their own and do not necessarily represent the views of Townhall.com. 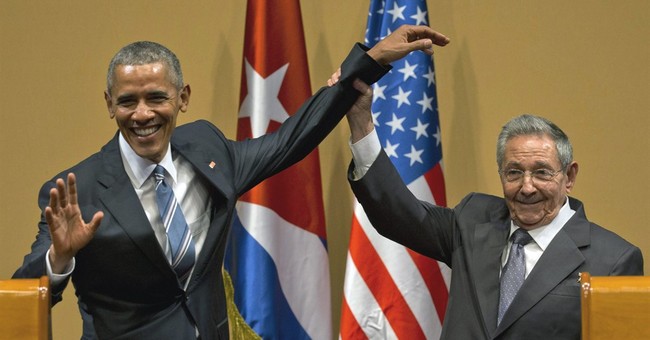 You see, amigos: This week 21 years ago three U.S. citizens and one legal U.S. resident who belonged to a humanitarian volunteer organization known as “Brothers to the Rescue” were busy at their volunteer humanitarian jobs when Raul Castro (then head of Cuba’s military) gave orders for his air force to ambush and murder them. Raul Castro himself boasted about these orders.

These American volunteer workers were tangibly saving more innocent lives (countless men, women and children) than most Peace Corp workers or “community-organizers” could ever show for their work, despite all the media hype.

You see, amigos:  Twenty times as many people (men, women, children) have died trying to escape Castro’s Cuba as died trying to escape East Germany.  So during the mid 1990s a volunteer outfit known as Brothers To the Rescue based in south Florida flew unarmed Cessnas over the Florida Straits alerting the U.S. Coast Guard to the location of these desperate escapees from Stalinism and keeping many from joining the terrible tally of death by drowning, dehydration or getting ripped apart and eaten alive by sharks. By 1996 these American humanitarian volunteers had flown 1,800 missions and helped rescue 4,200 men, women and children.

Considering how prior to Castroism Cuba was swamped with more immigrants per-capita (mostly from Europe) than was the U.S.–considering how people once clamored to enter Cuba–the exodus from Castroite Cuba and the rescue flights were viewed by Castro (and his innumerable U.S. agents-of influence) as very bad publicity for the Stalinist regime..

So in preparation to murder Brothers to the Rescue (the historic Castroite remedy for this type of thing) Castro infiltrated a KGB-trained spy named Gerardo Hernandez into south Florida and into the humanitarian group. On Feb, 24, 1996, Hernandez passed to Castro the flight plan for one of the Brothers’ humanitarian flights over the straits.

With this info in hand, Castro’s MIGS ambushed and blasted apart (in international air space) the lumbering and utterly defenseless Cessnas, murdering the four humanitarian volunteers. Three of these murdered men were U.S. citizens, one was a Marine who volunteered for two tours in Vietnam.

The murdered Armando Alejandre Jr. came to the U.S. at age ten in 1960. His first order of business when he reached the age of 18 was fulfilling his dream of becoming a U.S. citizen. His next was joining the United States Marine corps and volunteering for service in Vietnam. He returned with several decorations. As a member of Brothers to the Rescue he often dropped flowers over the sea, in memory of the thousands they'd been unable to rescue in time.

A man with a weapon or with both hands free to fight has always palsied the Castros with fright. The notion of Raul Castro facing a United States Marine in combat mode is simply laughable, in a pathetic sort of way. So Castro waited for Alejandro and his brothers to be carrying flowers--and made his move, ambushing and murdering them in cold blood. Migs against Cessnas, cannon and rockets against flowers.

Castro’s spy, Gerardo Hernandez, was shortly uncovered and convicted in U.S. federal court of conspiracy to commit murder and the conviction was upheld all the way to the Supreme Court.

The Communist spy was serving two life sentences for the murder of Americans while the Castros (and their innumerable U.S. agents-of-influence) constantly clamored for his release and return to Cuba. This clamoring was incessant for 20 years and through three U.S. presidential administrations. But to no avail, owing to the overwhelming proof of Hernandez guilt in conspiring to murder Americans.

Worst of all, amigos: For months prior to the Obama-Castro deal that released the Communist murderer, the families of the Americans he murdered were repeatedly assured by Obama’s State Department. that no such shameful  deal would ever take place.Often they made this promise face to face with the grieving families, as documented in this video where Congresswoman Ileana Ros-Lehtinen confronts Obama’s State Department. with their bald-faced lies and relentless treachery against U.S. citizens. Hillary Clinton’s Benghazi testimony has got nothing on this.

The Obama administration’s fetish to quickly and fully satisfy every whim of the Communist murderers of U.S. citizens reached Jerry Springer Show levels when—prior to his release-- a specimen of Gerardo Hernandez semen was ferreted from his prison cell to Cuba. Hernandez and his wife, you see, were eager to add another Communist subject to the Castro-Family Kingdom but couldn’t quite figure out a workable procedure.

Fear not!  Raul Castro rang his little bell and Obama’s State Department. (Ben Rhodes in particular) quickly scurried over, smiling, bowing, eager to please. No hotel valet has ever been as solicitous of the whims of a big-tipping guest, no butler to his master’s whims-- as Ben Rhodes was to the whims of the terror-sponsors who premeditatedly murdered innocent U.S. citizens.

The convicted Communist spy and terrorist provided his semen from his maximum security jail cell and Democrat Sen. Patrick Leahy’s aide Tim Rieser dutifully delivered the precious item to communist wife in Havana—all with the obvious (and eager) approval of the Obama State Department.

Don’t believe me do you?.... “There’s no way even the Obama administration could have sunk to something so smutty, treasonous, foul and grotesque!” you say.  Well, read about it yourself.