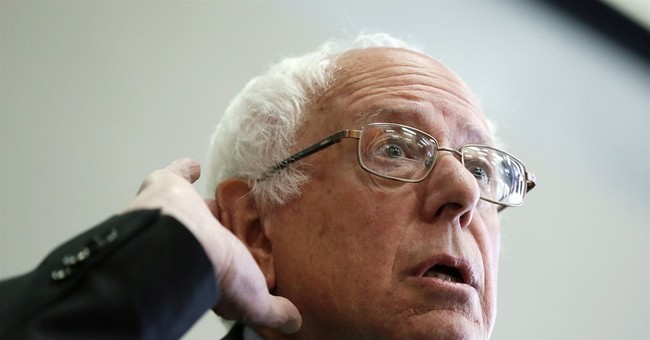 There. That’s better: a proper “Man Bites Dog” headline. After all, a prominent Democrat hailing Stalinist Cuba is hardly worth a headline by now. But please indulge me here.

You see, back in 1985 after a visit to Nicaragua where (then) Burlington mayor Bernie Sanders came away highly impressed with Daniel Ortega (the Castro-Muppet then busily Sovietizing Nicaragua) Sanders also felt obligated to compliment the Soviet-Muppet jerking the Nicaraguan Muppet’s strings.

“In 1959 everybody was totally convinced that Fidel Castro was the worst guy in the world and all of the Cuban people were going to rise up in rebellion against Fidel Castro…They forgot that he educated their kids, gave their kids healthcare, totally transformed the society…..So they expected this tremendous uprising in Cuba, but it never came.”

In fact, if Bernie Sanders is truly a “maniac” and “socialist/communist” as Donald Trump claims, then this mania is hardly rare in Sanders’ political party. I give you former president of the United States and official ‘Elder Statesman of the Democratic party,” Jimmy Carter:

“Fidel Castro first and foremost is and always has been a committed egalitarian. He wanted a system that provided the basic needs to all -- enough to eat, health care, adequate housing and education. Cuba has superb systems of health care and universal education…We greeted each other as old friends.”

I now give you the late Democratic Senator and presidential candidate George McGovern also known as “The Conscience” of the Democratic party: “Fidel Castro is very shy and sensitive, I frankly like him and regard him as a friend.”

Not that it makes much difference given the priorities and educational level of much of the American electorate nowadays, but in case the Republican candidate finds himself debating Sanders and his imbecilities on Cuba become an issue, I offer the following pointers without any contractual obligations and—given the crisis our nation faces with this election--even waive the consultant fees:

In fact: in 1958 (the year prior to the glorious revolution), Cuba ranked 13th from the top, worldwide with the lowest infant-mortality rate. This meant that robustly capitalist and immigrant-swamped pre-Castro Cuba had the 13th lowest infant-mortality rate in the world. This put her not only at the top in Latin America but atop most of Western Europe, ahead of France, Belgium, West Germany, Israel, Japan, Austria, Italy, Spain, and Portugal. Today all of these countries leave Communist Cuba in the dust, with much lower infant mortality rates.

And even plummeting from 13th (Capitalist) to 47th (Communist), Cuba's "impressive" infant mortality rate is kept artificially low by Communist chicanery with statistics and by a truly appalling abortion rate of 0.71 abortions per live birth. This is the hemisphere's highest, by far. Any Cuban pregnancy that even hints at trouble gets "terminated."

Dr. Juan Felipe García, MD, of Jacksonville, Fla., interviewed several recent doctor defectors from Cuba. Based on what he heard, he reported the following:

"The official Cuban infant-mortality figure is a farce. Cuban pediatricians constantly falsify figures for the regime. If an infant dies during its first year, the doctors often report he was older. Otherwise, such lapses could cost him severe penalties and his job."

And regarding Bernie Sanders’ imbecility about the Cuban uprising “that never was:”

In fact, the only genuinely popular rebellion and genuine guerrilla war in Cuba in the 20th Century was waged against the regime co-founded by Fidel Castro and Che Guevara, which mandates under penalty of prison or firing squad what its subjects read, say, earn, eat (both substance and amount,) where they live, travel or work.

“Fight oppression!” reads the inscription on Che Guevara posters and t-shirts, by the way.

This ferocious guerrilla war, waged during the early 60’s only 90 miles from U.S. shores mostly by Cuban rednecks might have taken place on the planet Pluto for all you'll read about it in the mainstream media. You see, this anti-Stalinist rebellion, involving ten times the number of rebels, ten times the number of casualties, and lasting twice as long as the puerile skirmish against Batista, found no New York Times’ “reporter” anywhere near Cuba's hills. And as Che Guevara snickered in his diaries:

“Much more valuable than recruits for our guerrilla force, were American media recruits to export our propaganda."

And as Fidel Castro snickered while visiting New York Times headquarters in April 1959 and pinning a medal on their Latin American reporter Herbert Matthews; “To our American friend Herbert Matthews with gratitude. Without your help, and without the help of The New York Times,the Revolution in Cuba would never have been.”

To get an idea of the odds faced by those betrayed Cuban rebels, the desperation of their battle and the damage they wrought, you might revisit Tony Montana during the last 15 minutes of "Scarface."

JFK's Missile crisis “victory,” you see, pledged to the Soviets that the U.S. immediately pull the rug out from under Cuba's valiant and desperate freedom- fighters. Raul Castro himself admitted that at the time of the Missile Crisis his troops and their Soviet advisors were up against 179 different "bands of bandits" as he labeled the thousands of Cuban anti-Communist rebels then battling savagely and virtually alone in Cuba's countryside, with small arms shipments from their compatriots in south Florida as their only lifeline.

Kennedy's Missile-Crisis deal with Khrushchev cut this lifeline. It's a tribute to the power of Castroite mythology that even with all this information a matter of public record for over half a century the academic/media mantra (gloat, actually) still has Castro," defying ten U.S. Presidents!"

Instead Cuba’s own sons were sandbagged by a U.S. President from “nation-building” in their own nation on America’s very doorstep—and where a free and prosperous nation that attracted waves of first-world immigrants had actually existed only years earlier.

Later U.S. Presidents sent hundreds of thousands of America’s sons across vast oceans to “nation-build” in places where “nation-building” had the same chance as a snowball in Hades.