In Defense of Russell Brand (Sort Of) 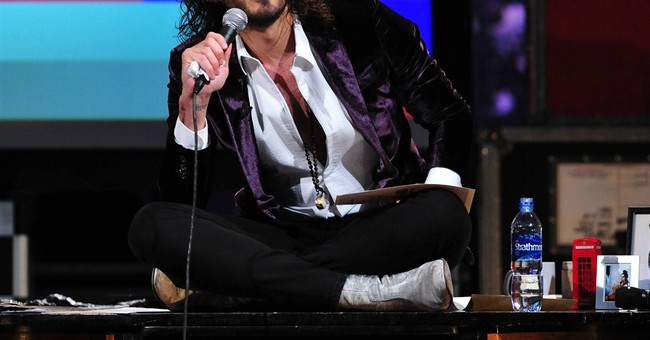 British vaudeville comedian Russell Brand needs better staff. He’s touring the U.S. promoting his book “Revolution” while impishly equating Che Guevara with Jesus Christ and Gandhi. The look on Brand’s face as he looked around the stage and crowd while detonating these devilish observations on Jimmy Fallon was pitiful—in the most genuine sense of the word. Brand deserves pity for imagining this was a bomb-throwingly clever way to shake-up the U.S. “establishment.”

Somebody should enlighten the poor fool. In 2000, for instance, Time magazine-- a sturdy pillar of the U.S. media establishment--honored Che Guevara in their “Heroes and Icons" alongside Anne Frank, Andrei Sakharov, Rosa Parks and Mother Theresa. “This obscure Argentine doctor,” starts Time’s eulogy, “who abandoned his profession and his native land to pursue the emancipation of the poor…"

Typically for the topic of Che in the mainstream media the very first sentence of the Time encomium contains a lie. In fact, no record of Ernesto Guevara’s medical degree exists. He was a medical student. Not a doctor.

"I hoped to get a snap taken…standing by a wrought-iron image of the revolutionary HERO Che Guevara!” That’s Margaret Thatcher’s daughter Carol Thatcher during a recent visit to Cuba. Yes that’s the ultra-educated daughter of worldwide conservative icon Margaret Thatcher, a symbol of the very frumpiness Russell Brand cavils against. “Che is your constant companion on any trip to Cuba. His image is everywhere-more so than Fidel himself. Such was his presence that our tour was dubbed "On Yer Bike With Che," continues the smitten Carol Thatcher.

But why pick on the Iron Lady’s daughter? Here’s libertarian icon Murray Rothbard, whose relationship with Ron Paul’s was such that he even wrote the preface to one of Paul’s books. Ron Paul regards Rothbard as one of America’s “greatest men” and “greatest heroes of freedom.” Rand Paul, by the way, considers it an honor to have met Murray Rothbard and a “privilege” to have once driven him to the airport.

In 1967 Murray Rothbard seemed highly bereaved and aggrieved to hear of Che Guevara’s whacking. Here’ the libertarian icon’s encomium to the Stalinist who outlawed private property and declared that individualism must disappear!”—and who enforced both communist fiats with torture chambers and firing squads.

“Che is dead, and we all mourn him. Long live Che! Why? How is it that so many libertarians mourn this man?...What made Che such an heroic figure for our time is that he, more than any man of our epoch or even of our century, was the living embodiment of the principle of Revolution… we all knew that his enemy was our enemy–that great Colossus that oppresses and threatens all the peoples of the world, U. S. imperialism… The most fitting memorial to Che was the intensely moving speech about his death delivered by his old comrade-in-arms, Fidel Castro.”

But I repeat: he was “second in command.” Is it customary to denounce Himmler but not Hitler? Beria but not Stalin? Kang Shen but not Mao Tse Tung?

Of course not. But then the Igors, Himmler, Beria and Shen were pathetically un-photogenic, compared to their masters. Che Guevara, on the other hand, resembled a dashing Jim Morrison with a wispy beard, compared to his master Fidel Castro-- who when entering Havana in 1959-- already looked like a dumpy post-Woodstock Jerry Garcia.

Naturally it was master press-agent/propagandist Fidel Castro himself who plumbed the publicity potential of his Igor’s visage—then proceeded to “Light the Fire” of the world’s ignorant, credulous and swinish with that famous Che Guevara picture.

Did the media, your professors (or Russell Brand) inform you that the famous Che picture (reputedly the most reproduced portrait of the last century) was actually photoshopped?

Didn’t think so. Actually “Photoshopping,” as we know it today, didn’t exist in the 60’s. But Che’s (now) famous face was actually cropped out of a group picture taken in Havana on March, 21, 1960 during an official regime photo-shoot for visiting Castro groupies Jean Paul Sartre and Simone de Beauvoir. The group in the original picture included Cuban “President” of the time Osvaldo Dorticos among other of Castro’s regime eunuchs. The nondescript (of the time) Che Guevara stood in the background.

Then in 1967, while sorting through a roll of film for a proposed Castro biography, Italian publisher (and part-time KGB agent) Giangiacomo Feltrinelli noticed Che’s face in the group picture and suggested it be cropped out. Fidel loved the idea and on his orders the picture was cropped, then released to the world with a blast of revolutionary trumpets in early 1968—with Che Guevara safely dead.

Contracting Fidel Castro as your press agent does have its downside, you see. Former CIA officers revealed to this writer how Fidel Castro himself, via the Bolivian Communist party, constantly fed the CIA info on Che's whereabouts in Bolivia. Fidel Castro's directive to the Bolivian Communists regarding Che and his merry band is also a hoot: "Not even an aspirin," instructed Cuba's Maximum Leader to his Bolivian comrades, meaning that Bolivia's Communists were not to assist Che in any way — "not even with an aspirin," if Che complained of a headache.

But let’s further deflate Russell Brand by reviewing some of the “establishment” opinions of the man who gave Che Guevara every single order for his mass-murders, tortures and thefts.

Here’s Democratic presidential candidate, Presidential Medal of Freedom winner, and “Conscience of the Democratic party,” George Mc Govern: "Fidel Castro is very shy and sensitive, I frankly like him and regard him as a friend."

Here’s former President of the United States and official ‘Elder Statesman” of the Democratic party, Jimmy Carter: “Fidel Castro first and foremost is and always has been a committed egalitarian. He wanted a system that provided the basic needs to all -- enough to eat, health care, adequate housing and education. Cuba has superb systems of health care and universal education…We greeted each other as old friends.”

I repeat: the gentlemen mentioned above are widely regarded respectively as the “the conscience and “the Elder Statesman” of America’s majority political party.

In brief: sorry Russell Brand. But if your goal is to cheekily insult the U.S. establishment you might raid the staffs of some true media iconoclasts, say Rush Limbaugh or Mark Levin.