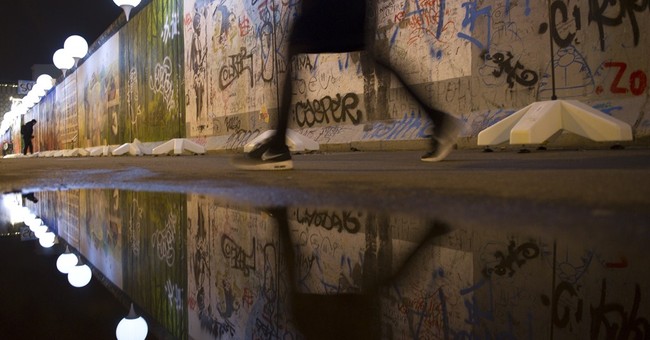 “Mr Gorbachev, Tear down this Wall!” Who can forget the famous line? In fact most people forgot it shortly after President Reagan detonated them at the Brandenberg gate in June 1987. At the time they got little press-play, and what it got was mostly negative.

It was only in November 1989 as the wall was finally torn down that the proclamation was recalled, dusted off, and festooned with the fame now almost universal—at least among conservatives.

The people of the free world thrilled almost en-masse when the wall was finally torn down. The 25th anniversary celebrations of its fall were joined by most of the mainstream media, including Newsweek (I mention them for a special reason, stick with me.)

Indeed, to lay eyes on the Berlin Wall provoked shame and horror in everyone. Here was stark and perfect proof of what divided the world at the time. No amount of paint or plaster to pretty it up could disguise what it was doing. Reagan saw it and outspokenly called it out. Diplomatic pecksniffs be damned

And two years later, Mr Gorbachev complied, to much acclaim worldwide, though his compliance may have been unwitting.

Down in Cuba at this very time, Raul Castro was warning, “If any Gorbachev raises his head around here—we’ll promptly chop it off! We would rather see Cuba sink into the ocean, like Atlantis-- before seeing the corrupting forces of capitalism prevail!”Raul Castro charming boasts came from safely behind a Communist barrier that murdered (by using the lowest estimate) --over TWENTY TIMES the number of innocents as the one Gorbachev was petitioned worldwide to tear down.

And yet a couple of years ago Newsweek magazine hailed Castro’s Cuba as among “The Best Countries in the World,” for its “quality of life.” Now regarding pre-Castro Cuba Newsweek might have been closer to the mark. It simply cannot be repeated often enough: In the 20th Century prior to Castroism Cuba welcomed more immigrants per-capita (primarily from Europe) than did the U.S.

At the time of Raul Castro’s characteristically bloodthirsty boast about the fate of any Cuban Gorbachev, and during the wholesale murder by his military of hundreds of Cubans for the crime of voting with their feet (and paddles) against him, thousands of tourists from Western Europe (many from West Germany) were already pouring into Castro’s island fiefdom.

Every Mark, Lira, Pound, Franc and Schilling of their expenditures landed in the pocket of the Soviet-trained outfit who owned and operated the Soviet helicopters and gunships that helped fill that cemetery-without- crosses where twenty-times as many freedom-seeking Cubans were buried as freedom-seeking germans lay in all of Berlin’s cemeteries. And machine-gun bullets kill relatively quickly compared to sunburn, dehydration and Tiger sharks.

Upon the Soviet Union’s collapse, and in the nick of time, this Caribbean outpost of the Evil Empire had a lifeline thrown to them—and the Communists clutched it eagerly. This financial lifeline for Cuban Stalinism was thrown in large part by European witnesses to the Holocaust, Gulag and Cold War. Starting in 1991 and thronging till today free-spending tourists from Europe have flocked and swarmed and teemed to Castro’s rescue.

You see, among the only income-producing activity properly describable as an industry in Cuba is tourism. And the Cuban military owns Cuba’s tourist industry almost lock, stock and barrel. So the only outfit in Cuba with guns is also the richest, thanks in large part to people who shuddered and grimaced at the Berlin Wall, and celebrate its fall.

A seventeen-year-old named Orlando Travieso was armed with only a homemade paddle when he was machine-gunned to death in March 1991 with Soviet bullets. His crime was trying to flee Cuba on a tiny raft. Loamis Gonzalez was fifteen when he was machine-gunned to death for the same crime the same year. Owen Delgado was fifteen when Castro's police dragged him out of the Ecuadorian Embassy where he sought asylum and clubbed him to death with rifle butts.

Yes, behind those statistics lie people, often children. Carlos Anaya was 3 on July 13th, 1994 when Castro’s Coast “Guard” rammed and sank the escaping tugboat that held his mother and 70 other desperate Cubans. His boatmate Yisel Alvarez was 4. Helen Martinez was six months old. 43 Cubans drowned, 11 of them children. Fidel Castro then personally decorated the boat caption responsible for the ramming, sinking and drownings. The premeditated Castroite atrocity and deafening media silence outraged even Ted Koppel, if three years later:

“Three and a half years ago, in the summer of 1994, something terrible happened out there, seven or eight miles out at sea, off the northern coast of Cuba,” he broadcast from Miami on ABC’s Nightline January 20, 1998. “It was an incident that went all but unnoticed in the US media. The Cuban-American community protested but they protest a lot and as I say, we in the mainstream media all but ignored it.”

And they’re still ignoring it. Cubans had the misfortune of being born on a picturesque island. “The most gorgeous land human eyes have ever seen,” according to Columbus when he first saw it. Location, location, location as real-estate folks say. Flying or boating into Cuba, then sipping mojitos along its beaches while gazing north just doesn’t provoke the same emotions as sipping Scnapps in a café near the Brandenberg Gate and gazing east.

The Mojito does down smoothly, the Cohiba smoke curls languidly through the air, the salsa music pulses in the background, the mulatta prostitutes beckon. Unlike in Berlin, on a Cuban vacation nothing in sight hints at anything like the barbed wire and machine gunners of the murderous Wall in Berlin, portions of which remain for the very purpose of reminding tourists of the recent horror.

Very few visitors to Cuba conjure how those gorgeous emerald, then blue, then cobalt waters reaped the name of “the cemetery without crosses.” It’s a Cuban thing, apparently. "I Hate The Sea" is the title of a gut-gripping underground essay by Cuban dissident Rafael Contreras. It's about some young men Rafael met on the beach west of Havana. Some were building a raft while another stood off by himself on the edge of the waves and stared out to sea. "It incarcerates us," fumed the loner while cursing and spitting into a receding wave along the shoreline, "worse than jail bars."

Yet mankind has always been drawn to the sea. For most of us the sea soothes, attracts, infatuates. The most expensive real estate always faces the sea. "Water is everywhere a protection," writes anthropologist Lionel Tiger, trying to explain the lure, "like a moat. As a species we love it."

Yet Cubans now hate it. Che Guevara was right. The Cuban Revolution indeed created a "New Man" – but one more psychologically crippled than even Che imagined. In Cuba, Castro and Che's totalitarian dream gave rise to a psychic cripple beyond the imagination of even Orwell or Huxley: the first specimens in the history of the species to actually hate the sea.