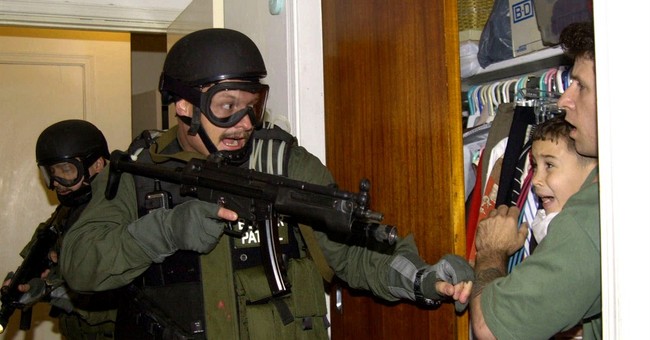 “How we treat those in need, particularly young people who must appear in immigration proceedings, many of whom are fleeing violence, persecution, abuse or trafficking – goes to the core of who we are as a nation,” Holder said while detailing his program to provide 100 lawyers and paralegals for the minors.

And yet it was (then) Deputy Attorney General Eric Holder who concocted the “legal” cover for the INS to mace, kick, stomp, and gun-butt their way into the home of Elian Gonzalez’s legal custodians (legal U.S. citizens and residents all) on the morning of April 22, 2000, wrench a bawling 6-year-old child from his family at machine-gun point and bundle him off to Castro’s terror-sponsoring fiefdom, leaving 102 people (legal U.S. citizens and residents all) injured, some seriously.

Even as the mace dispersed and Elian’s legal custodians sought medical help for their injuries, FoxNews Andrew Napolitano already had Eric Holder’s number:

Tell me, Mr. Holder,” Judge Napolitano asked on April 23, 2000 why did you not get a court order authorizing you to go in and get the boy (Elian Gonzalez)?

Holder: Because we didn’t need a court order. INS can do this on its own.

Napolitano: You know that a court order would have given you the cloak of respectability to have seized the boy.

Holder: We didn’t need an order.

Napolitano: Then why did you ask the 11th Circuit Court of Appeals for such an order if you didn’t need one?

Napolitano: The fact is, for the first time in history you have taken a child from his residence at gunpoint to enforce your custody position, even though you did not have an order authorizing it. When is the last time a boy, a child, was taken at the point of a gun without an order of a judge…Unprecedented in American history.”

Holder: “He was not taken at the point of a gun.”

Napolitano: “We have a photograph showing he was taken at the point of a gun.”

Holder: “They were armed agents who went in there who acted very sensitively…”

The nature of this “sensitivity,” I’ve already mentioned, including the number injured by the mace, gun-butts and jackboots. Thanks to the ritual MSM-Castroite collusion most people forget (or missed) the crucial legal and ethical details of the Elian circus/tragedy — which were mostly established during the first week after the boys rescue at sea, after his heroic mother’s drowning.

The “son-belongs-with-his-father” crowd, for instance, “missed” (with the help of the MSM-Democratic complex) that Elian’s father was initially delighted that his motherless son was in the U.S. and in the loving arms of his uncles and cousins.

The evidence — frantically buried by the MSM-Democratic complex — was overwhelming. Mauricio Vicent, a reporter for Madrid newspaper El Pais, wrote that during that first week he’d visited Elian’s home town of Cardenas and talked with Elian’s father, Juan Miguel, along with other family members and friends. All confirmed that Juan Miguel had always longed for his son Elian to flee to the United States. Shortly after Elian’s rescue, his father had even applied for a U.S. visa!

(And lest we forget: this desperation was to escape a nation that prior to Castroism took in more immigrants per-capita than the U.S., and hosted about the same number of American residents as the U.S. hosted Cuban residents. Nothing so enrages (!!!) the Castroites and their U.S. propaganda auxiliaries as revealing this little-known datum, as often done here at Townhall. Hence the Castro media’s frequent fury (!!!) against Townhall.)

Elian’s Miami uncle, Lazaro, explained it repeatedly and best: “I always said I would turn over Elian to his father, when Juan Miguel would come here and claim him. But I (along with practically everyone with experience under communism from Cambodians to Hungarians and from Lithuanians to Cubans) knew such a thing was impossible. He couldn’t do that. I knew it wasn’t Juan Miguel requesting Elian–it was Fidel.”

The legal-weasels forgot (or missed) that on Dec, 1st 1999 the INS (ostensibly under the jurisdiction of Janet Reno’s and Eric Holder’s Justice Department) asserted that Miami-based uncle Lazaro was indeed Elian’s legal custodian and Florida’s family court indeed the place to arbitrate further issues.

Then on Dec 5th, 1999, Castro clapped his hands. Instantly the Clinton team and their MSM minions snapped to attention. Within weeks Clinton’s INS had turned its initial decision on its head. Shortly thereafter Clinton’s lawyer chum Gregory Craig was in Havana meeting with Fidel Castro. A few weeks later the INS was kicking down Delfin Gonzalez’s door, pummeling camera men and elderly ladies to the ground with jackboots and wrenching a screaming Elian from his legal custodians in a blaze of pepper gas and machine guns. When asked for the legal authority for this, they brandished either a search warrant to seize evidence that didn’t exist (and would not have been hidden anyway) or an arrest warrant to seize someone who no one claimed was a criminal or even a lawbreaker.

“They never made it clear just what kind of warrant it was. And neither would it have been legal,” patiently explained Alan Dershowitz (no less!)

So why did Elian’s father change his tune?

Think of Juan Miguel as Frankie Pentangeli. The gun Fidel Castro held to Juan Miguel’s head was as invisible (to those without experience with Communism) as the one Mikey held to Pentangeli’s head was to most spectators at those hearings.

All that stomping and macing and firepower in the dawn hours of April 22, 2000 horrified and enraged many people for sure – it also amazed. Why such overkill? Why such “Shock and Awe,” many wondered?

Well, it appears that those INS agents genuinely feared that they were on a mission fraught with deadly peril from massive firepower. Fidel Castro himself, you see, had confided to Bill Clinton via his lawyer friend Gregory Craig that Lazaro Gonzalez’ house was crammed with typical Cuban-American right-wing maniacs, all heavily armed, foaming at the mouth, and ready to rumble.

Given that American liberals pretty much share Castro’s view of Americans citizens of Cuban heritage, the Stalinist dictator’s warning was warmly received –and scrupulously acted upon.

But it turned out that the only blasting that morning came from mace and tear gas into the faces of ladies (legal U.S. citizens and residents all) holding infants and rosaries.

A U.S. Justice Dept. that accepted the word of an official State-Sponsor-of-Terror whose lifelong dream is to nuke the U.S. (Fidel Castro) over that of lawful U.S. citizens (Cuban-Americans who claimed that from day one Fidel Castro was the one orchestrating Elian’s return, but who mostly register Republican)—such action by a federal agency should really give more U.S. citizens more pause.